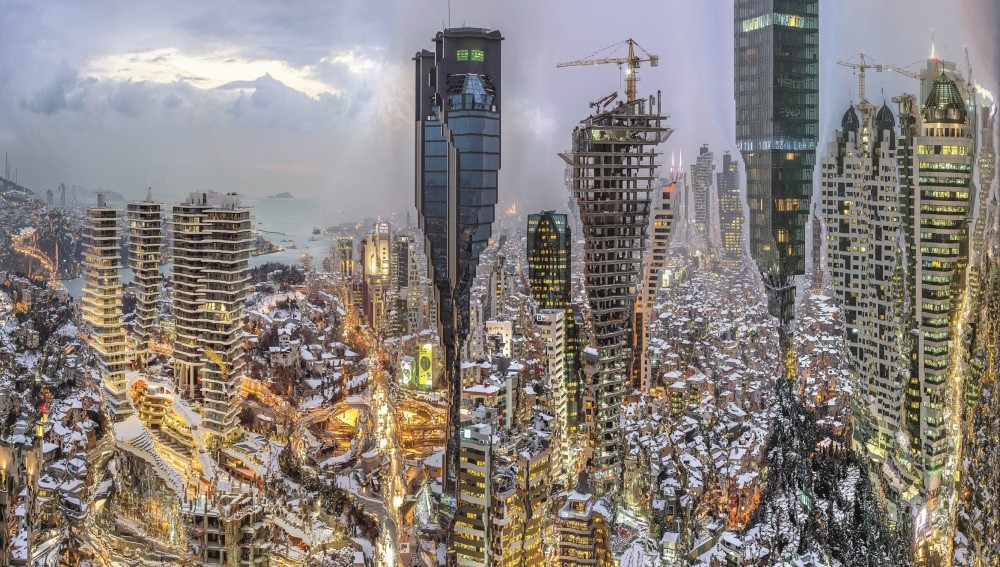 Transformed into an art gallery and museum at the bequest of Sakıp Sabancı, the deceased Turkish businessman and philanthropist, the Sakıp Sabancı Mardin City Museum is currently hosting the exhibition "Photography's Diverse States - Murat Germen Sectional Retrospective" by Murat Germen.

Germen offers 52 art pieces that focus on themes such as the effects of over-urbanization, sustainability of local cultures and the devastation humans have caused to nature. The exhibition will be on at Dilek Sabancı Art Gallery at Sakıp Sabancı City Museum until March 31, 2019.

With digital equipment used in his photography, Germen aims to change the ordinariness and familiarity of visual depictions of cities. The reason behind this is that during his architecture education Germen closely witnessed a period where analog photography started to transform into digital.

With the excitement of working in digital, Germen combined drawings, numeric images and computer modeling with photography in the first years of his artistic career. However, the fact that software programs may sometimes bear a more dominant mark on an art work than the artist, made Germen embark on some other quests.

With his recent works, Germen tried to diversify and size up the meaning of two-dimensioned expression in photography. He thinks that unexpected results, those that come out by chance in art, shine among other, more ordinary, results.

The exhibition entitled "Photography's Diverse States - Murat Germen Sectional Retrospective" presents pieces from the early years of the artist. Reflecting Germen's thoughts on art, the pieces in the exhibition are produced both with spontaneous and controlled effects.

Having held personal and group exhibitions in over 80 countries including the U.S., Italy, the U.K., Germany and Australia, Germen spoke about his first exhibition in Mardin: "Unfortunately, the works produced and consumed in Istanbul remain on the agenda much longer than they deserve. It is quite normal that Istanbul is the focal point of the country as it is the megacity. Hence, I think that Istanbul's domination must be decreased and such uniting events, which harmonize art theories and practices, must also be held out of Istanbul."

Born in 1965, Murat Germen is an artist, educator and archivist based in Istanbul and London. Using photography as a means of expression and research, Germen completed his master's at Massachusetts Institute of Technology (MIT), where he was enrolled with a Fulbright scholarship.

He earned an M.A. in Architecture with a gold medal by the American Institute of Architects (AIA). He gives lectures on photography, arts and new media at the Sabancı University Faculty of Arts and Social Sciences. Having released so many printed and online publications on photography, architecture, planning, new media and the arts, Germen has been invited to many conferences on international platforms.

Germen's works focus on themes such as over-urbanization, the effects of gentrification, permanent citizenship and urban rights, documentary sustainability of local cultures and the devastation humans cause on nature. He has produced two monographs; one is published by Skira (Italy) and the other by MASA (Turkey). He has contributed to more than 80 personal and group exhibitions held in Turkey, the U.S., Italy, Germany, the U.K., Mexico, Portugal, Uzbekistan, Greece, Japan, Russia, Ukraine, Poland, Bulgaria, Iran, India, Australia, France, Canada, Bahrain, Korea, United Arab Emirates, China, Sweden, Switzerland and Egypt.

More than 300 editions of various pieces by Germen were included in personal collections based in Turkey and abroad in addition to Istanbul Modern, Elgiz Museum of Contemporary Art, Centre of Contemporary Art in Torun (Poland), Istanbul Codex, Yapı Kredi Culture Arts Collections and Imago Mundi by Benetton Foundation.