An illustrious palette: The abstract paintings of Nissa Raad 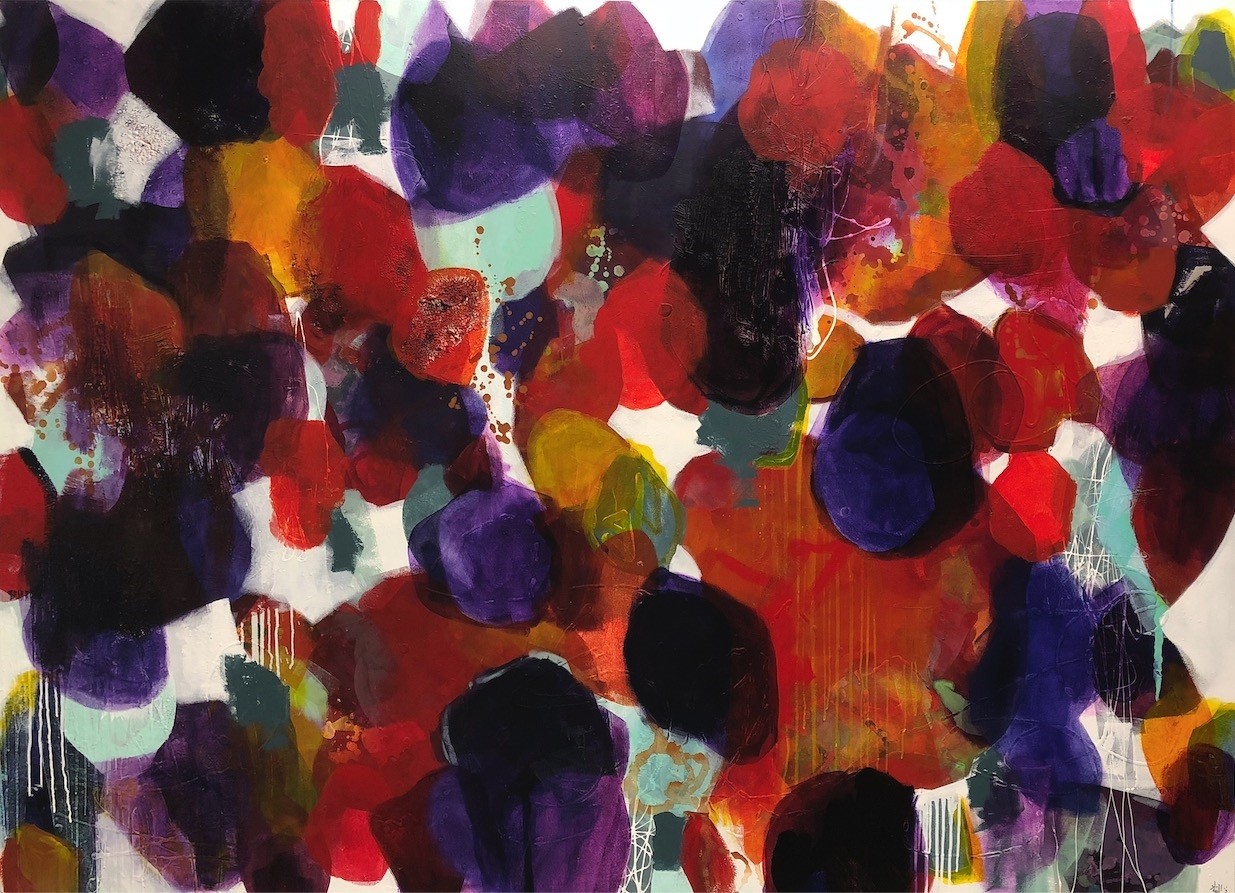 In a pale room in Nişantaşı, an opulent district uphill from the forested slopes of Maçka Park, the world-class contemporary art gallery, Dirimart, is exhibiting the latest series of 10 abstract paintings by Princess Nissa Raad, who departed from illustration to emphasize the inner workings of her creative process

80 years her senior, Fahrelnissa Zeid watched her 2-year-old granddaughter Nissa Raad play and thought to paint her portrait. The elder Turkish artist from the island of Büyükada off the coast of Istanbul had long married into the Iraqi royal family living in exile in the Jordanian capital of Amman following the tragedy of July 1958, when King Faisal II and several of his relatives were murdered in a military coup in Baghdad.

Zeid spent her last years immersed in the desert city couched in its sandstorm wilderness where Bedouin children roamed through distant mirages, goats in tow, living off the harsh land. She appreciated how its Roman amphitheater defines the downtown core, and often ventured to espy the pre-Islamic architecture of the Nabatean Arab civilizations in the countryside.

When she was not absorbed in any number of her late pieces, she taught her peerless approach to painting craft to eager, young students like Adila Laidi-Hanieh, who would become her biographer when she published, "Painter of Inner Worlds" with the London-based Art / Books in 2017.

The lavishly detailed, bountifully researched book was recently translated into Turkish by RES, a small press based in the Istanbul gallery Dirimart, which is currently showing a retrospective of Zeid in its expansive Dolapdere location, interestingly coinciding with the exhibition of 10 new paintings by Princess Nissa Raad.

Titled with a counterintuitive sense of aesthetic juxtaposition, "The Sweetness of Lemons" is held in a more compact, complementary gallery site in the upscale neighborhood of Nişantaşı, where the abstract, mixed media canvases by Raad are mesmerizingly compatible surrounded by the cultural air of sleek fashion boutiques and nouveau riche apartments overlooking parklands that exude the 19th century European lifestyles of the bygone aristocracy ascending from the pearly, ornate influence of Dolmabahçe Palace.

A lemon not far from its tree

The first name of Nissa Raad, is, in fact, shared with her grandmother, spelled Fahrelnissa, and meaning, "the glory of women." And she signs her paintings as such, in the calligraphic Arabic script. Yet, for her current show, despite the parallel Zeid retrospective, "The Sweetness of Lemons" makes no direct critical or historical references between grandmother and granddaughter in the context of the art and the creative processes that frame the works.

Whereas other luminaries in her family pursued a variety of artistic disciplines to advance Turkish cultural production into modernity, from the avant-garde ceramics of Fureya Koral to the literary wiles of the Fisherman of Halicarnassus, the chosen medium of Raad, particularly at present, is that of abstract painting, a path that her grandmother pioneered from the region unsurpassed for her visionary techniques and mammoth scales, merging Orientalist perspectives with her signature blend of multiethnic authenticity as a consummate 20th century Turkish woman, and a devout princess married into Arab royalty.

"It is difficult to me to discuss my art without expressing how much my grandmother's work has affected my own. I feel her guiding me, yet at the same time telling me to find my own approaches and techniques. The artists of my family were all "risk takers" to a certain extent- especially my grandmother who broke boundaries in many different ways - so this is something I seek to do as well," wrote Raad in a recent email. "Fahrelnissa Zeid's earlier works were not abstracts, and like her I was initially drawn to the figurative. For this exhibition, "The Sweetness of Lemons," I felt like delving into abstraction and losing myself in it purely because it was something new to me and I'm very glad I did."

By the time Zeid conceived her oil painting, "Fahrelnissa" (1983), she had already fused her lifelong work in portraiture with elements of the tradition-inspired, eastern Mediterranean geometric abstract expressionism that has arguably best identified her as a leading visionary in one of the 20th century's greatest unsung modernist movements where the Turkish and Arab art worlds intersect. 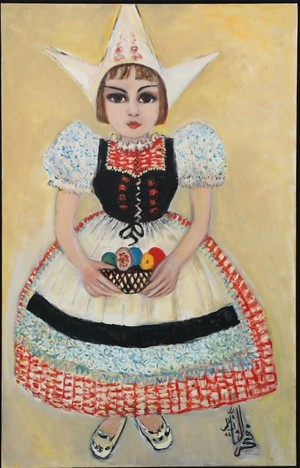 Named after her beloved granddaughter who charmingly took her name, the piece has a delightful gravity, as the 2-year-old Raad stands from head-to-toe adorned in a ceremonial dress that falls over her legs with a plush umbrella of crimsons, turquoise and ebony, and tightens around her midsection in the fashions of antiquated, European dress. From her puffed shoulders down she grasps a lacquered pot of exotic fruits, and wears a spike headdress befitting her majestic, though petite presence. She looks out through the beautiful, entrancing eyes of her grandmother, oval saucers of a penetrating, chestnut-tinged coffee hue.

Sweetness of her recollection

"I'm very happy that my first exhibition in Turkey coincided with my grandmother's and it's very special and sentimental to me. Istanbul has become such an art hub and I am thrilled to have been a part of a very eventful art week this September, particularly at such a prestigious and prominent gallery as Dirimart which has proven to be a driving force in the art world, both in the region and globally," wrote Raad. "All the 10 pieces in this exhibition were created with the same repeated process of random chaotic splashes of color, followed by a reevaluation of what is necessary and what isn't. Again I relied heavily on texture which is something I find very appealing. This painting below in particular is one of my favorites because of the contrasts of not only color, but of texture as well."

Before embarking into the empty canvas space that would become, "The Sweetness of Lemons," Raad felt she needed to experience a paradigm shift in her art practice, and to test her creative boundaries, ultimately questioning how she might see herself as a painter. Her works foreground the element of texture. In light of a new Raad painting, seeing is feeling. And more, random spontaneity and technical variety are the founding principles behind her process. She is demonstrating uninhibited, newfound freedom as an artist. While she may have ways to go before she breaches the envelope of truly critical and unprecedented originality from a theoretical perspective in the wider art world, especially in historical reference to Zeid, she is showing the type of audacity that is the very legacy of her family heritage in the fine arts.

Against the off-white lighting at the Dirimart gallery in Nişantaşı, her calculated splotches of vivid reds, purples and oranges commingle with transparent blues, drip marks that, milky against some canvases and inky in others, are

reminiscent of the abstractionist master Abidin Elderoglu, who recently had a posthumous retrospective accompanied with a comprehensive book publication of his life work all produced by Dirimart as well. The works are unique from each other mostly with respect to varying color schemes, which spark and fade across the frames, dialoguing brightly with emptiness and visually evocative of lily ponds. Only one piece, "NR05" (2018), is more opaque in its composition, filling the space with an overlap of aquatic, liquid shades textured with swirls of action paint that seems to have fallen ever so slowly, gently onto the exquisitely succulent palette of waterlogged forms. 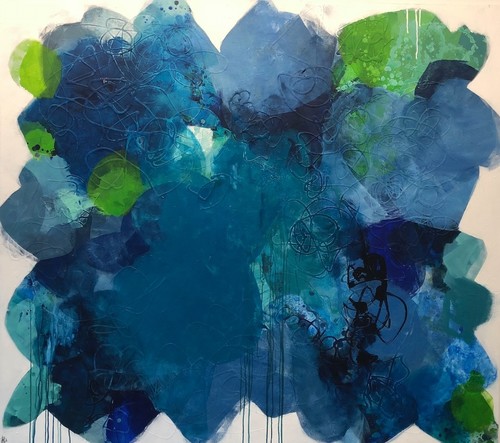 As a young artist from a marginal locale on the contemporary art map, the 37-year-old Princess Raad is stepping into the global limelight as a Middle Eastern artist with her first exhibition in Turkey on a consciously radical note, with respect to her personal background and aesthetic direction. Not only is she realizing herself artistically within a genre overshadowed by the defining reputation of her grandmother as an abstract painter, but she has shed the cartoonish appeal of her earlier works in favor of a creative path that remains precarious for local audiences and collectors, imaginably almost as much it was when Zeid began to morph her observational objectivism into abstractions with a surrealist edge. Yet, she has retained her special approach to textured colors, which have a watercolor effect, charged with luminous, geometric vivacity. Surrealism began by juxtaposing irrational images, like sweet lemons. As the illustrative and figurative beginnings of Raad and Zeid show respectively, to observe daily life in the Middle East in its outstanding modernizations is to perceive the surrealist inspiration.

"The art scene in Amman is growing quickly; there has been an emergence of many new galleries and art spaces as well as various different art events in recent years aimed at showcasing established artists as well as emerging ones," wrote Raad. "The art scene is, however, on a much smaller scale to that of Dubai and Istanbul, but more and more opportunities for growth are evident. I myself am constantly inspired by my city, Amman, and all my early works are evident of that."