From ship to shore: Antonio Cosentino at Riverrun 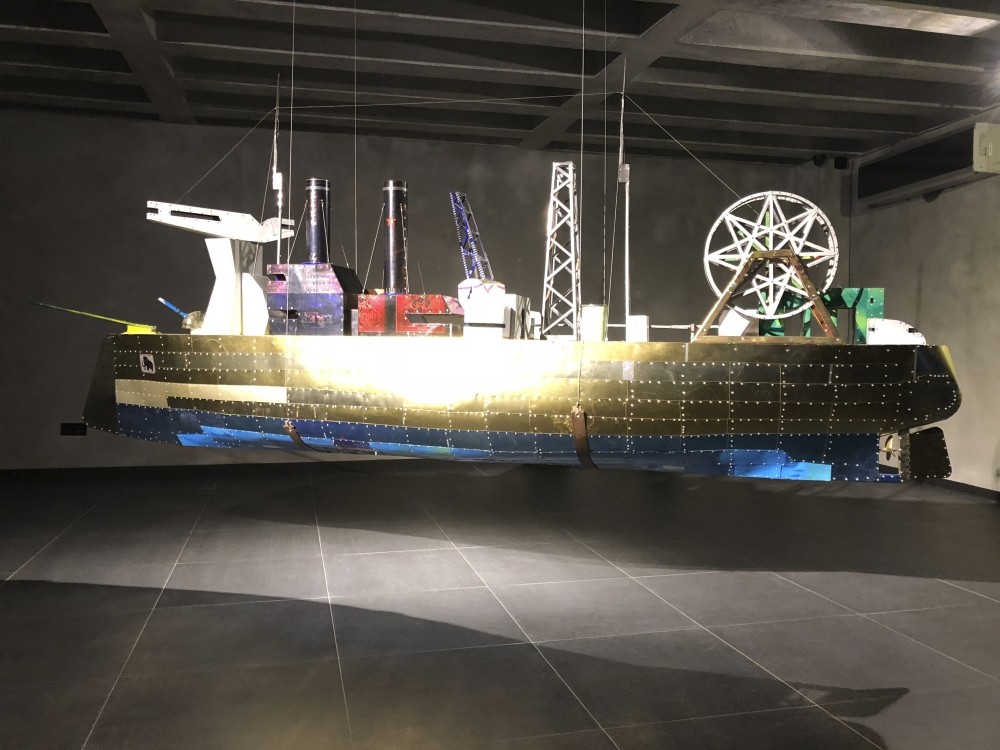 Turkish artist Antonio Cosentino is a man of legend, a trans-media storyteller with a penchant for tin sculptural installations. His 320 centimeter-long model ship called ‘The Stelyanos Hrisopulos,' conceived in 2013 after the Sait Faik short story of the same name, is on display at Riverrun till Dec. 1

In the midst of a fleeting cold front descending with the Black Sea winds of autumn, Antonio Cosentino wove through the notorious Istanbul traffic on his bicycle to Riverrun, a new downtown literary cafe and unconventional, multi-level gallery, also housing Norgunk, an art book publisher. He exuded a bright, youthful demeanor, his hair tightly bound into a top-knot as is fashionable among eclectic Turkish men. He wore a cozy, knit sweater vest over a loose printed shirt, eyes beaming, smiling radiantly. His light, elastic presence is a testament to his full life on the edge of reason where the fictions of his singular imagination and broad experiences within and without the known world have commingled to unravel every riddle, knot and puzzle that might pose for a fixed view of reality.

As a dyed-in-the-wool creative, Cosentino has his hands deep in the pockets of various artistic disciplines, from literature to music and a host of practices encompassing everything from painting and installation, to sculpture and performance. In the summer, Riverrun exhibited his vivid, psychedelic canvas, "Cactus Three," (2016) at Öktem&Aykut Gallery, together with a quirky floor plan of concrete models and neon lighting for the off-season, citywide collaborative show ""Large Meadow." The namesake of his current exhibition produced by Riverrun is after a story by the fabled "island dweller," Sait Faik Abasıyanık, the so-called Chekhov of Turkey, praised as the preeminent master of Turkish short fiction. Cosentino is also expressly inspired by the French writer Julien Gracq, specifically his best-known 1951 novel, "The Opposing Shore," about two fictional Mediterranean countries and the war they wage for three centuries. 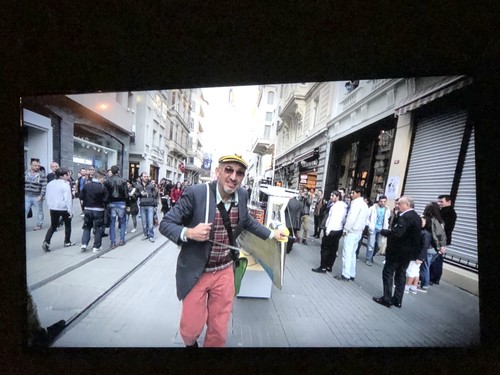 The blurred lines and contested relationships between fiction and truth in social history and its manifestations in daily life have ever been integral points of action and reflection for Cosentino throughout his long, dynamic and continually vital international career. Such themes are all the more relevant while his piece, "The Stelyanos Hrisopulos" (2013) resurfaces in the bunker of Riverrun, accompanied by drawings on paper, "Sketches" (2013), detailing his graphic research as he endeavored to craft the hull from fastened rectangles of tin, inspired by the ubiquitous, versatile material scattered about Istanbul, mostly seen as recycled containers for Anatolian staples like oil, cheese, olives, often filled with mortar to weigh the base of signposts.

As an autodidact polymath fusing manual laborer and conceptual art, he designed the ship to the dimensions of the Soviet battleship Aurora, iconized by the 1925 film "Battleship Potemkin," and built every intricate aspect of it by hand in four months.

Before envisioning the piece, he received an invitation to work with the commercial gallery Bergsen & Bergsen in the hilltop, skyscraper district of Gayrettepe, which had furnished its swanky showroom with over a dozen luxury yachts. Cosentino, in his characteristic style equal parts witty and eccentric, protested the mechanical, replicability and industrialization of art as an artist aiming to reclaim the innate poetry of creative human effort. At the same time, he sought to further the marine aesthetic at the gallery with an ambitious, microcosmic invention, not only to mirror the physical presence of seafaring vessels, but to traverse the psychological plane where narrative thought and industrial manufacture converge. In fact, as is shown at the Riverrun bunker in the form of a book of tickets, he had placed adverts in national newspapers offering a theoretical bon voyage for TL 2 ($0.37) to any takers on his getaway ship of dreams.

Finally, his performance, "Escape from Marmara" (2013) rounds out the exhibition in the form of a 10-minute-and-15-second video demonstrating certain motifs in Sait Faik's story in dialogue with the mythology of Istanbul, in which Mehmed the Conqueror is said to have overthrown the spiritual heart of the Greek Orthodox cosmos by a surprise attack transporting a naval fleet overland, usurping Constantinople with a feat comparable to the ancient Carthaginian general Hannibal's alpine invasion of Italy. In the short fiction of Sait Faik, and in "The Stelyanos Hrisopulos" in particular, the author ingeniously evades the usual pitfalls of identity politics that haunt most Turkish and Middle Eastern literature and its reception, especially by Western critics. Greek minorities in Turkey, for example, are generally tokenized and typecast in cultural work.

Instead, the "island dweller" humanizes his Greek relations in the multiethnic Anatolian neighborhood village tradition, sharing customs and territory as steadfastly as the insatiable taste for fish and raki, reveling in the good old deliberations of premodern perennial rhythms of life lived with as little artificial, sociological definition as possible, to simply and liberally enjoy the rolling, seascape vistas of the Prince Islands archipelago in the Sea of Marmara, as on Burgaz (known as Antigoni in Greek), a serene isle where Sait Faik lived, surrounded by olive and fig groves sheltering remote, though welcoming monasteries.

Cosentino confronts the intercultural nexus of the mixed Greek and Turkish presence with the public in Istanbul with "Escape from Marmara," literally pulling the girth of his tin ship through its streets and promenades to display his peculiar brand of insight and intuition, reminding everyone fortunate enough to have come in touch with his work in the last five years that society is afflicted with a spectacularly blinding illusion, the groundless claim that certain peoples must be mutually exclusive in the event of a national project. It is a dangerous way of thinking generally schemed as a requisite to modern nationalism, all the more asinine in Turkey, home to ethno-linguistic pluralities since time immemorial whose complex social fabrics remain beyond the normative, categorical reckonings of Eurocentric historiography.

The artist, the writer, the man

As is clear from his name, Cosentino has roots in the multigenerational Italian diaspora, particularly as it flourished in Asia Minor during an age lost to time when the bygone fabrics of multicultural, ancient civilization went hand-in-hand with premodern imperial identity, a reality that ensued for the better part of human history. His parents were the fifth generation of his family from Italy to reside in Turkey, yet his ancestral language was not passed to him. In his art practice within the context of "The Stelyanos Hrisopulos," he affirms the ongoing, increasing importance of experiential multiculturalism by contesting regional narratives in the metaphor of a voyage on the literary myth of his ship that, by his hands, has emerged as a palpable figment of reality on the common earth.

Despite living relatively isolated on his island, Sait Faik enjoyed recognition as an honorary member of the Mark Twain Association in the United States a year before his untimely death at the young age of 47 due to cirrhosis, a deadly condition said to have resulted from his alcohol abuse and bohemian excesses. Yet, his influential story, "The Stelyanos Hrisopulos," only about six pages, remains untranslated into English, as with most of his work, considered fundamental to the development of contemporary Turkish prose fiction. Cosentino is not only an avid reader moved by his writing to the point of making artwork, but also as a writer himself. He composes poems and short stories with a deft knack, preferring a creative, fictive approach to art writing over the mainstream objectification of artists and the art they exhibit publicly as mere personalities and products of popular culture and commercial exploitation. Interestingly, a collector bought his oversized sculptural installation, "The Stelyanos Hrisopulos," only to allow Cosentino, and galleries like Riverrun to exhibit it freely in the interest of public appreciation.

"When nationalism was the great pursuit in the world, Turkish literature went through a phase where there were very good examples of literature, but poor execution of minority characters for a long time. Our land, Turkey, has a lot of prominent minorities who are a big part of our mutual welfare. Sait Faik, when he wrote "The Stelyanos Hrisopulos," about a 12-year-old Greek child, Trifon and his grandfather, he made those characters well-rounded. They are not minorities. They are people," said Cosentino, a vibrant artist with a promising future and a storied past as one of the founding members of the Hafriyat (Excavation) Group, a defunct collective that prompted shows and art movements from some of Turkey's most radical makers out of a space in Karaköy for well over a decade. "'The Stelyanos Hrisopulos' is not about two Greek people. It's about people."