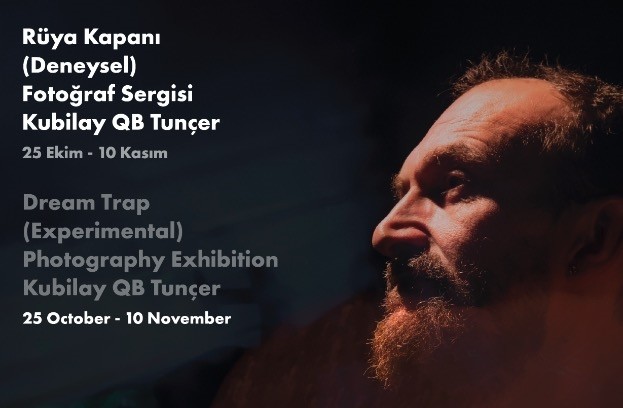 Istanbul Concept Gallery has opened "Dream Trap," the second exhibition of the season, in cooperation with Storytel. The exhibition, which has a digital setup that can reach hundreds of thousands of visitors, will present Kubilay QB Tunçer's experimental photography collection "Dream Trap" until Nov. 10

Istanbul Concept, which has been bringing together the worlds of culture, art and design with its projects for 11 years, opened the second exhibition at the Istanbul Concept Gallery, its own unique and independent space, with artist Kubilay QB Tunçer's experimental photography exhibition "Dream Trap." Successfully carrying the titles of writer, actor, magician and teacher, Tunçer is now set to make his mark on a photography exhibition that he defines as experimental.

Speaking about the setup of the exhibition, exhibition curator Işık Gençoğlu said: "For this exhibition, we contacted Storytel, a digital book platform that has reached hundreds of thousands of people in the world, for a collaboration to digitalize our exhibitions. Storytel has released poems written and read by Kubilay QB Tunçer in an exhibition-specific address. Thus, the exhibition is a colorful and multidisciplinary project with a digital book, including various disciplines. Perhaps for the first time, an exhibition will have access to hundreds of thousands of people outside of the display area independent of national borders."

According to Gençoğlu, this project is a brave and multi-faceted exhibition trial and, as its name suggests, is a dream catcher in which the truth is sought on the basis of Tunçer's poems. Tunçer's photographs while reading poems were taken by photographer Mehmet Özcan. The exhibition is open until Nov. 10. Digital access to the exhibition is possible via a shared link on the Instagram account of Istanbul Concept.

"10 years ago, I wrote a ballet libretto called "Hüsn-ü Aşk'a Dair" ("About Beauty and Love") for the Istanbul State Opera and Ballet. The choreography of the work was performed by Beyhan Murphy. I entered the world of Şeyh Galip and created a long poem in kind. I saw the dreams I am sharing in the exhibition during that period," Tunçer said about the content of the exhibition.

He said: "I am not a photographer. Of course, I know that being a photographer is a very toilsome and invaluable thing. I am a person who hopefully embraced the camera, as I could not find 'Dream Catcher' in other fields of the art I was dealing with. I have tried thousands of times by keeping light to a minimum, pushing the possibilities of the camera and moving various objects. I was determined to see the things, which I saw when I closed my eyes, on the camera screen as well. It took about a year. I did not play with the photos when the shooting was over. I did not Photoshop them. I do not know how to do it anyway. Dreaming is a simple thing. However, we cannot watch dreams easily. During this journey, I learned that, to my surprise, the device called the camera was actually invented to watch dreams. It is what 'Dream Trap' is!"

Magic: He received the 2009 Merlin award and was named the best cabaret magician of the year in the world. He received first prize at the international Belgrade festival in 2017. He has been dealing with magic for many years. He was a student of Prof. Metin And. He performed in many cities in the world including Las Vegas. He toured in Turkey, appeared on television shows and hosted magicians from around the world on his "Hokus Pokus Şov" ("Abracadabra Show") on ATV. He performed in numerous corporate meetings, worked as a visual effects consultant on many productions at state theaters and operas, founded the Istanbul Magic Festival and authored the books "Herkes Sihirbaz Olacak" ("Everybody Will Be a Magician") and "Sihirbaz Lider" ("Magician Leader").

Dramatic scripts: He won the 2009 Afife best playwright award. His works have been performed on television, cinema and theater. His play "Olağan Mucizeler" ("Ordinary Miracles"), co-produced with Lale Mansur, was the first Turkish company to perform in English in Edinburgh and London. "Cardenio," which he wrote on a Harvard University scholarship, was added to the repertoire by the same university. In addition to unforgettable classics, such as "Susam Sokağı" ("Sesame Street"), he wrote for many television series, such as "Gümüş" ("Silver"), "El Gibi" ("Like Foreigner"), "Maçolar" ("Machos") and "Mert ile Gert" ("Mert and Gert"). He scripted "Mutluluk" ("Happiness"), the Golden Orange award-winning movie and the ballets ("State Opera and Ballet") "Hüsn-ü Aşk'a Dair" ("About Beauty and Love") and "Barbaros."

Acting: He has performed in theater, television and cinema and played various characters in over 10 films and 20 TV series, such as Nuri Bilge Ceylan's "Bir Zamanlar Anadolu'da" ("Once Upon a Time in Anatolia").

He continuously participates in shows, conferences and training and consultancy studies in Turkey and abroad.

This is the first time Tunçer has prepared an exhibition. Most importantly, T

unçer is sharing his experimental work with the audience.

Istanbul Concept Gallery was founded under the direction of curator Işık Gençoğlu who organizes exhibitions with social messages and ensures that the art is accessible and understandable for everyone. The gallery aims to actualize projects that bring creative industries together with its permanent and voluntary creative team and receives the support of the fund of knowledge of Istanbul Concept, which has been successful for 10 years. Istanbul Concept Gallery opens the exhibition area to viewers 10 hours a day six days a week.

The gallery has a program of events scheduled for day and evening hours and offers workshop and seminar programs prepared with the contribution of competent representatives of various disciplines.

Istanbul Concept Gallery aims to create a professional archive of art history in the long term.