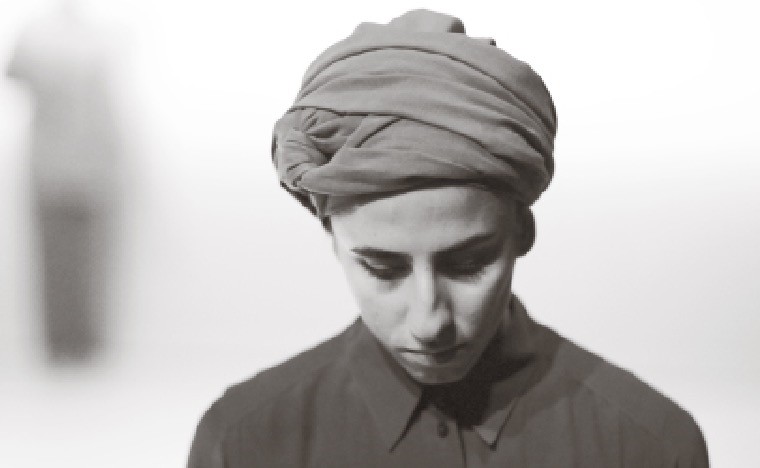 u201cBeing,u201d creating a line crossing between Northern Europe and Mesopotamia, focuses on the body and existence.
by Daily Sabah Nov 15, 2018 12:00 am

Set to be held between Nov. 17 and Dec. 4, the 22nd Istanbul Theater Festival will host many theater and performance groups, as well as individual artists from various countries

Organized for the 22nd time by the Istanbul Foundation for Culture and Arts (İKSV), the Istanbul Theater Festival will be meeting audiences from Nov. 17 to Dec. 4.

The festival will welcome 52 performances from 12 local and 12 international theaters, dance and performance groups and in addition, free readings, discussions, movie screenings, workshops and masterclasses will be held. 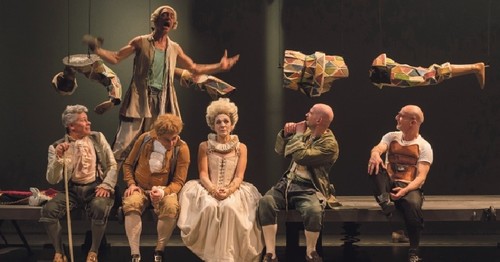 Piccolo Teatro di Milano, which have been active since 1947, will be in Istanbul after an eight-year break with "Il Teatro Comico" from Carlo Goldoni, one of the cornerstones of world theater and a leading name of Italian tradition. The Milan-based group, which was the guest of the Istanbul Theater Festival in 2010, is now being hosted with a contemporary interpretation of Goldoni's "Il Teatro Comico."

Goldini's play, written in the 1750s, goes beyond the typecasts and masks of commedia dell'arte is at the festival with a performance by Roberto Latini, who won the Best Actor Award at the prestigious UBU Awards last year. Latini, who will meet the audience as Orazio in the play, stays true to the legacy of Italian theater but at the same time shapes his performances by considering the future of European theater.

The musical arrangements of the play belong to UBU Award Winner, Gianluca Misiti, who worked with Roberto Latini before. The director and actor of "Il Teatro Comico," Roberto Latini will also join a workshop together with professional actors and actresses as a part of the side events of the festival.

"Compagnia Baccala," the product of Camilla Pessi and Simone Fassari's productive collaboration, is visiting the festival with a show that blends theater with circus and clowns, and is a fun, cleverly constructed and unique offering - something we don't witness quite often. The entertaining performance of the group, "Pss Pss," which has been performed in 50 countries with more than 700 performances, has won 15 international awards including the Cirque du Soleil. The duo, whose inspirations include the stars of the silent cinema period such as Charlie Chaplin and Buster Keaton, address a wide audience for all those over the age of seven with their performance that is like a homage to the silent cinema period.

Master director Theodoros Terzopoulos, who has left his mark in the history of theater, will be the guest of the festival with two productions. Last year, the third piece in his trilogy, "Encore," met theater lovers at the festival and this year, the first two plays of the series, "Amor" and "Alarme" will be hosted by the festival.

Terzopoulos focuses on a conflict, which has gone down in art history in the first play of his trilogy, "Alarme," and brings the fight for the throne between Scottish Queen Mary Stuart and her cousin the Queen of England, Elizabeth to the stage. Basing his directing on a quest for methods, Terzopoulos' striking ideas are transformed for the stage with the impressive performances of narrator Tasos Dimas, Aglaia Pappa and Sophia Hill.

Premiering in December 2013, the second play of the trilogy, "Amor" is a composition based on the text written by Thanasis Alevras. In "Amor," interpreted as "Terzopoulos's view of the era of global crisis," the director uses the stage as an auction area where roles, accessories, emotions, memories and even body parts can be sold and purchased at.

Known for "Bacchae," which was performed two days in a row at Atatürk Cultural Center in 1990 and then the first international co-production of the festival in 1999, "Heracles Trilogy," Theodoros Terzopoulos will hold an acting master class, in which he will share his method of acting, which has inspired actors and actresses all over the world among the side events of the festival.

Praised for his innovative touches all around the world, Canadian director Robert Lepage and famous Russian actor Evgeny Mironov will be coming together on stage for "Hamlet | Collage" at the 22nd Istanbul Theater Festival. With Evgeny Mironov's portrayal of 11 "Hamlet" characters, this performance blends theater with contemporary art and focuses on a Hamlet "looking at" his own consciousness.

The first collaboration of Canadian theater and film director Robert Lepage and Moscow's innovative Theater of Nations, Hamlet in "Hamlet | Collage" is performed masterfully by Mironov within a cube positioned in the "void" and with the ghosts of other characters in Shakespeare's play. Mironov clearly illustrates the reflection of Hamlet's dialogue with death, how he finds the expression of his existence in death and the consciousness that is infused by "rotting" from the beginning to the end of the play. Art director and actor Evgeny Mironov of the Theater of Nations and the winner of this year's Honorary Award, will hold a panel with Robert Lepage to share his work and acting experiences.

Nederlands Dans Theater I, one of the pioneering groups of the world's current dance scene from the Edinburgh Festival to the Kennedy Center, will meet the audience with a four part dance marathon.

Nederlands Dans Theater I, which determines the future of contemporary dance with their use of exhilarating music accompanying their skillful choreographers, their innovative stage and light design and talented dancers from 16 countries, who achieve perfection under the same roof, is coming to Istanbul with a dance marathon consisting of four choreographies from the most productive four choreographers of the group. Nederlands Dans Theater will present a selection of parts including "Shut Eye" and "Shoot the Moon" from the resident choreographers Sol Leon and Paul Lightfoot, "The Statement" by Crystal Pite, who has created more than 50 award-winning choreographies and "Woke Up Blind" from Marco Goecke, who won the Most Impressive Choreography award twice from Zwaan, the most important dance prize of the Netherlands.

In the "Shut Eye" choreography of the performance, which will leave its mark on memories not only with its choreography but its music as well, Olafur Arnalds and Bryce Dessner's expressionist music will turn into a calm fairy tale and in "Shoot the Moon" Philip Glass' cinematic compositions will be the inspiration for a passionate poetry about the collapse of romantic relations on a set divided into three rooms. "The Statement" depicts the battle for power between four characters in charge of firing a fuse in a distant country around a meeting table, while "Woke up Blind" will display a haunting performance of six dancers who are dragged to the unknown accompanied by the strong voice of Jeff Buckley, who passed away at a young age.

A poem pixel by 'PIXEL'

"PIXEL" will meet with the audiences of Istanbul Theater Festival with the choreography of Mourad Merzouki, one of the important names of the hip-hop scene of the 1990s, who combines different disciplines in his works from martial arts to circus, fine arts to live music. The digital choreography and conceptual framework of "PIXEL" belongs to Adrien M / Claire B and it invites people who are surrounded by digital screens throughout their lives to travel across hip-hop and video art, forcing the boundaries of light and dance. Deemed as "smooth and perfect combination of screens and moving bodies" by the critics, in Merzouki's choreography, the dancers move through virtual landscapes created in on a three-dimensional stage. PIXEL's music is from Armand Amar, who has created the soundtracks of many documentaries along with the movie "Van Gogh."

Istanbul Theater Festival will introduce five productions with the participation of Turkish artists in collaboration with the international and interdisciplinary Belgium-based workspace Platform 0090 it has been in cooperation with over many years with the support of the Flanders Ministry of Culture. "Being," "Fourfold," "White on White" and "Night Symposium" and "YU," with the participation of Turkish artists all discussing issues, themes and contexts regarding Turkey, will meet with the theater lovers at the 22nd Istanbul Theater Festival under the "Selection From Flanders" section.

The journey of Icelandic choreographer and dancer Bara Sigfusdottir that started when she met the artists Masoumeh Jalalieh and Seyed Alireza Mirmohammadi in Tehran in 2014 focuses on the body and existence. "Being," born on a line crossing between Northern Europe and Mesopotamia is a production of Kunst/Werk & Platform 0090.

Visual artist and stage designer Meryem Bayram, who works and produces in Belgium and who ensures that we look at the venue from a different perspective with her designs is the guest of the festival with "Fourfold," for which she created the conceptual framework. In this performance centering on how humans building physical spaces and related to them, Guy Rombots and Meryem Bayram will meet "live." A mind-opening performance on borders and obstacles; the center of the performance is the "first meeting" between the two artists to constantly be renewed. The dramaturgy belongs to Igor Dobricic and the performance will bring many questions based on the meanings created by two people folding or opening a giant paper rectangle or other materials in order to create borders.

Bahar Temiz, a productive contemporary dancer of West European dance stages, is on the stage for a performance designed only for her by Marc Vanrunxt. "White on White" is the product of a workshop attended by both the artists and organized in 2014 in Istanbul by Platform 0090. The visual artist Anne-Mie Van Kerckhoven and fashion designer Jean-Paul Lespagnard contribute to the performance with their impressive touches. This choreography of Vanrunxt dedicated to a performance-based artistic experience will integrate with the dance of Bahar Temiz.

Mesut Arslan, who lives and produces in Belgium, constructs his plays as installations at the same time, will meet the festival audience with an adaptation this time. In "Night Symposium," adapted to the stage from Eric De Volder's play, a mother, her three sons and a non-existent father will move together with a peg top in the unique arena designed by Lawrence Malstaf to discover the boundaries of communication. What audiences need to do in this interpretation by Arslan of a family tragedy as they transform it into a daily ritual, is to seize the meaning that goes beyond watching and listening. In this journey, Güvenç Kıraç, Derya Alabora, Serhat Kılıç, Yaşar Bayram Gül and Pervin Bağdat, Mert Fırat and Ersin Umut Güler will accompany the audience.

Contemporary dance artist Gizem Aksu invites audiences to look inward in every meaning of the word. The conceptual framework, management and performance of "YU" belongs to Gizem Aksu and this performance is an inward journey that reaches from the relationship we establish with our organs to the relation of the body with time and space. In "YU" which premiered in April at Toneelhuis and subsequently exhibited in Mardin Biennial, Aksu interprets each organ's texture, area, rhythm and choosing and continuing to be alive together with other organs as archaic wisdom. Aksu invites the audiences to look at their relationship with life through a different window by tracing the sense of sensation, feeling and movement of the body in wisdom.