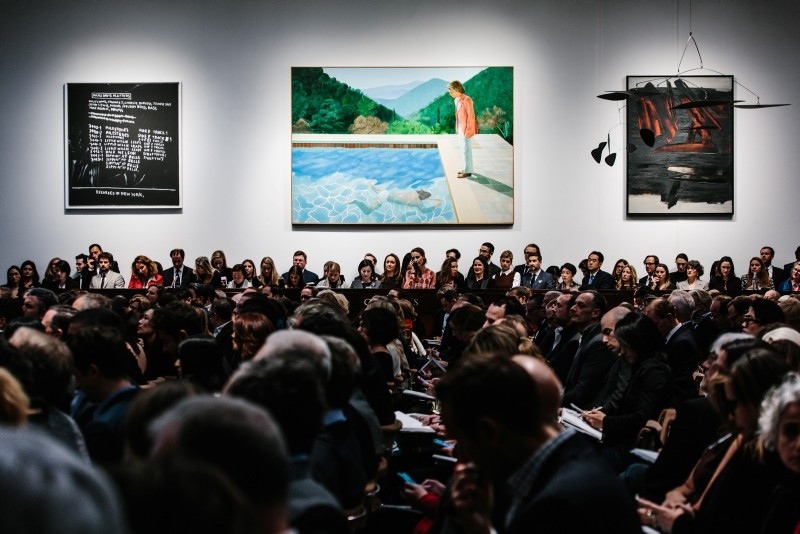 "Portrait of an Artist (Pool with Two Figures)" was snapped up after more than nine minutes of bidding, dominated by two rival telephone bidders.

It left for dust the previous record held by American artist Jeff Koons and his "Balloon Dog (Orange)," which sold for $58.4 million at Christie's in 2013.

It was standing room only to watch history in the making in the packed sales room at Christie's, where applause broke out when the epic sale concluded, the painting hammering for $80 million.

The buyer's premium and commission took the final price for the canvas, which adorned the wall of the bidding room, to $90,312,500, the auction house announced.

The $90 million price tag was all the more astonishing given the roughly $20,000 that Hockney told CNN his dealer originally sold the painting for in 1972, subsequently believing it had been undervalued.

Hockney told the network he thought that was "a lot of money at the time, but within six months it was sold again for $50,000."

Thursday's price was more than three times the 81-year-old's previous auction record -- $28.4 million for "Pacific Coast Highway and Santa Monica" from 1990 at Christie's great rival, Sotheby's, in May.

"I hope he's not upset that we sold it for so much money," Alex Rotter, Christie's co-chairman of post-war and contemporary art, told AFP when asked what he thought Hockney's reaction would be to the colossal price tag. "I'm a big fan of his," he added.

"I hope he's happy and pleased but he's an artist, he doesn't need us to tell him that he's great. He knows."

Christie's had estimated the painting pre-sale at $80 million and insisted it was "one of the great masterpieces of the modern era."

"Absolutely!" Christie's Alex Rotter told AFP when asked if the picture was really worth $90 million.

Swimming pools have long held a fascination for Hockney.

One of Hockney's most celebrated works, it has featured on the cover of a number of monographs about the artist and was part of an international retrospective that celebrated his 80th birthday in 2017.

In the picture, a smartly dressed man, standing on the edge of the pool, looks pensively at another figure swimming toward him in glistening waters, with an idyllic mountain view in the background.

The observer depicts Hockney's former lover and muse, Peter Schlesinger, one of his students at the University of California, Los Angeles.

Their affair ended the year that the picture was finished and experts have suggested that the swimmer could be Peter's new lover.

Christie's declined to reveal the identity of the seller nor any information about the buyer, insisting they wanted to remain anonymous.

But Bloomberg and the Artnet website reported that it was put up for sale by British billionaire Joe Lewis, who owns the Tavistock Group, London Premier League soccer team Tottenham Hotspur, and whom Forbes estimates to be worth $5 billion.

Last November's season was distinguished by the single most expensive piece of art ever sold at auction -- the eye-watering $450.3 million paid for Leonardo da Vinci's "Salvator Mundi" at Christie's.

A prolific artist who has continued to work well into old age, Hockney told Britain's Channel 4 television in an interview in 2015 that painting was "all I want to do now at my age. That's all I care about."

Highly unusually, the painting was put up with no reserve price, meaning that it could theoretically have gone for considerably less.

"It was right here a year ago where we had the Leonardo, now we had the Hockney. Yes it wasn't $450 million but the concept of no reserve, the excitement in the room, the multitude of bidders," said Rotter.

"In order for you, as an audience, to make it exciting... We need to come up with great ideas, great paintings, great collections and present something new."