To paint the lily: The five women of Layover

Versus Art Project, a contemporary art gallery in a historic apartment building off İstiklal Avenue rarely exhibits painters and does not often hold group shows. Layover is a worthy exception. Open until Nov. 24, the group show of five young women painters will color the wintry air for Istanbul's art lovers

Shakespeare's historical play, King John, is one of the Bard's least performed. It is set amid the groggy mists of the early 13th century, after the death of crusader Richard the Lionheart empties the throne of England for his youngest brother, John, to suffer the fate of a strongman, drowned in the egoism of royal power. France declares war over the inheritance. As a nobleman and peacemaker in his beloved English country, the Earl of Salisbury delivers the famed lines, "To gild refined gold, to paint the lily ... is wasteful and ridiculous to excess," defying King John, who by then has had himself crowned twice.

Across the Thames from Shakespeare's Globe, where King John premiered in 2015, as it recalls a time altogether remote from the usual production repertoire, past Big Ben and Buckingham Palace, is the Royal College of Art brushing up against Kensington Gardens, where its prestige is glorified as the only university in the world entirely dedicated to art and design for postgraduates.

Among the recent students were five women who completed their master's degrees in painting, all born after 1985, hailing from New Zealand, Turkey, the U.K., the U.S. and the United Arab Emirates (UAE). It was arguably fate that led them to become friends, eventually to create, study and critique new work together in neighboring studios out of the Battersea Sackler Painting building. It was through art that they found solidarity as women. 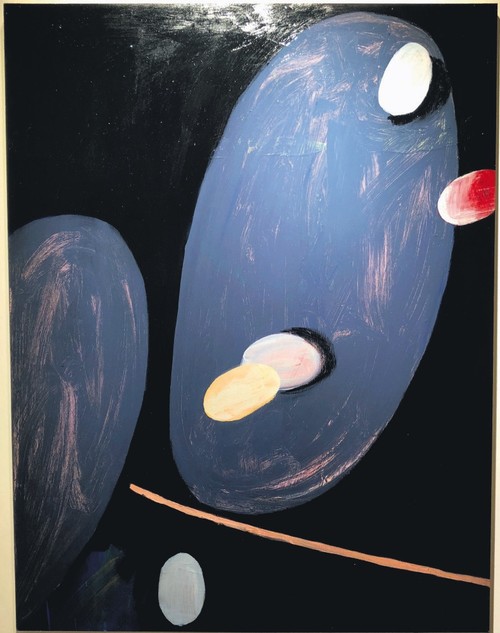 With diverse aesthetic perspectives and varying approaches to technique and media, Layover energizes the collaborative spirit of the group show in Istanbul's core. Versus Art Space received the portfolios of Sarah Alagroobi, Rosa Allison, Emma Fineman, Vanya Horwath and Çağla Ulusoy, and flipping through the works, the gallery doors soon opened to forward admiration for the sprouts of genius, the daring intensity, the fun-loving prowess that each artist demonstrates with all of the youthful vitality of a generation enriched by constant, personalized and immediate multicultural interaction.

There are 35 artworks displayed, embodying two years of intimate creative exchanges, sharing both intellectual energy and technical skill, as the five friends charted a path forward into greater social realities by making art with the reciprocal effect of enlightening and broadening planetary, social consciousness.

Unlike the top-heavy, patriarchal delusions of grandeur, conveyed by the cantankerous King John of Shakespeare, the artists of Layover provoke the literary wisdom of his contester, Salisbury, as they represent a check behind the scene, and very much in the spotlight as a contrast to and also independent from the male-dominated vision of creative work, and yet done largely within a timeless tradition, by hand, with paint. And even where Sarah Alagroobi employs computer technology to route plywood panels, she is still inspired by the oral storytelling of her Arabic-speaking grandmother. Yet, these artists equally affirm and transcend the dogmas of feminism and identity politics, maturing simply as makers on the path to redefining art and its appreciation for an increasingly diverse, global audience.

Reflecting on her days studying as one of the Layover quintets, Sarah Alagroobi remembers how her allies observed the imbalance of power, where representation in art was long riven by outmoded, domesticating mores. As a student committed to the twin ideals of artistic and professional freedom with her fellow women painters, Alagroobi felt that the "boys club" effect in mainstream art curation could be dismantled, despite the fact that it was rampant in one of the epicenters for art production and sale worldwide.

She is the only artist among the Layover five to have left London, having since returned to the UAE, where she is busy with upcoming shows. Her experience in London culminated in a mutual vision, to centralize women exclusively as an essential concept for group exhibitions of contemporary art.

Layover is one ripe fruit from that harvest of intentional action, a quality uniquely imbued by the works of Alagroobi. In her two untitled series of routed plywood, nine discs and four panels from 2017, Versus Art Project curated her eye for calligraphic Arabic script, digitized from transcriptions that she prepared after interviewing her grandmother about the civil war in Syria.

The software-fabricated pieces have a hybrid materialistic and virtual edge, relaying her training from furniture design to print media, and 3D installation among other practices. Obscuring and imaging where zones of abstraction and representation merge and differentiate; her sensibility speaks to the nature of gender fluidity in female expression, as to the indefinable blurs of multicultural integration, Middle Eastern nationalism, even human reason against the transcendent character of artwork.

"All of us, as multicultural female artists, collectively believe in the importance of representation as a vehicle for diversity and inclusivity. Layover refutes notions of cultural erasure in the contemporary art market and allows for women from eclectic cultural backgrounds to find common ground and an alternative narrative," wrote Alagroobi.

"The works of Rosa Allison and Emma Fineman legitimize the female perspective. Çagla Ulusoy and Vanya Horwath break down the habitual tendency to dismiss the voices of empowered female artists. I have had great conversations with each woman, especially Vanya and Emma, that really progressed my work in a direction I never thought possible," she said.

The concept of five women

Entering under high ceilings, the loft-like gallery floor at Versus Art Project is upstairs in a historic apartment building behind Atlas Cinema in an enigmatic Istanbul alleyway. The oils of Emma Fineman are arguably the most striking at first, as she frames human figures within pieces that encompass mammoth scales.

Her frenetic, practically instantaneous attack against her canvases evokes a refreshing, vigorous passion for the sensation of attaining the concepts that range in her mind, only to pour out like the fleeting moment across swathes of empty space into delicious nodes of colored forms.

Her piece, "Portrait of the Artist as a Young Man" (2018) details her investigation of self-image, as she explores herself in the guise of the opposite sex. Smeared letters and unfinished lines make for a dystopia of abstract expressionism. Another of her seven works at Layover is non-representational, yet addresses her age of puberty. It is titled, "Eleven Years To" (2018), and at 480 centimeters wide, it has its own wall.

"It was a pleasure to work with Versus Art Project. They gave us a lot of creative space that allowed our input. This is an ideal scenario that is sadly becoming a rarity. There is pressure in London to fit into a rigid commercial framework that discourages experimentation and changes your artistic habits. Layover allowed us to show works that are fresh and experimental. These opportunities are essential to progressing as an early career artist," Allison wrote. "From the beginning, a main idea in the show has been duality. This speaks to our experience of working as a group. Although we share the common language of painting, there are many aspects of our work that are opposite. My work is entirely handmade and highlights the imperfections and fragilities of the body. Sarah incorporates the perfect edge of technology."

With her oils and acrylics lathered onto variously sized boards, Allison often returns to a visual motif, that of the oval shape. Utilizing colored lines, and overlapping techniques, her work has a deep sense of motion, of gravity. "Falling Eggs" (2018), for example, is masterful in its subtle layering, its otherworldly mood. Distinctly, although with a similar eye for abstraction, Vanya Horwath expresses more down-to-earth reflections. "Mall Goth" (2018), created with an array of materials, namely acrylic, emulsion and PVA glue on canvas, juxtaposes the basic mold of a fashionable shoe, mirroring its contour in three duplicates. Her representational candor is marked with a vibrant, neon color scheme of faded lime greens and dark purple washed with indigo blue. Pale, handmade lines streak across - some disappearing - while others are a visible shock.

"The Layover show has been quite symbolic to me. Mainly because it is for the first time that I am showing in Turkey, my home country. Also, because it is for the first time since we graduated that we got back together in a show," wrote Ulusoy. "The work we are showing in Layover is a combination of what we have made in the past two years. A sort of research and meditation on the self, trying to explore and define a new, unique language, while we were at school. I find it interesting in that way since all these works were made under the same roof and communicated with each other through different periods. They are an archive and a result of what happened during the intensive two years of self-reflection."