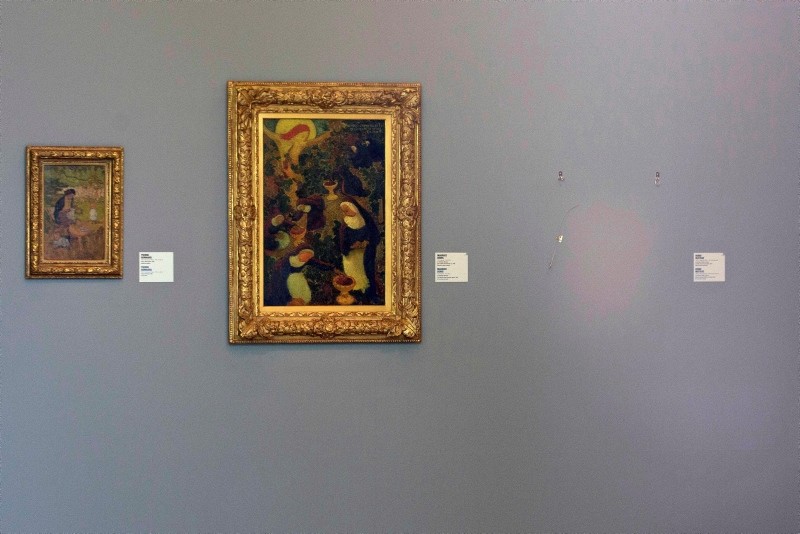 In this Oct. 16, 2012 file photo, the empty space where Henri Matisse' painting ,La Liseuse en Blanc et Jaune, was hanging, right, is seen next to a painting by Maurice Denis, center, and Pierre Bonnard, left,at Kunsthal museum in Rotterdam(AP Photo)
by Compiled from Wire Services Nov 18, 2018 12:00 am

A painting believed to be "Tête d'Arlequin" by Pablo Picasso stolen in 2012 from Rotterdam's Kunsthal museum has turned up in Romania, prosecutors said on Sunday.

In one of the art world's most dramatic heists, thieves made off with seven paintings, worth millions of euros, by Picasso, Matisse, Monet and others.

While the Romanian ringleader and his accomplices were convicted of the theft in 2013, none of the artworks had been recovered and Romanian experts believed at least three of them had been burned in an attempt to destroy evidence.

"Anti-organized crime prosecutors are investigating the circumstances under which a painting signed by Picasso worth roughly 800,000 euros ($913,440) was found on Saturday evening in Tulcea county," they said in a statement, adding the painting is being authenticated.

They said two Dutch citizens arrived at the Netherlands Embassy in Bucharest with the painting saying they had found it in the southeastern Romanian county.

Security camera footage released at the time of the theft showed a gang entering through a back door of the museum and disappearing from view. Seconds later they reappeared carrying bulky objects.

Four Romanians were jailed for the heist in 2014, and ordered to pay 18 million euros ($20.5 million at today's rates) to the paintings' insurers.

One of the group, Olga Dogaru, told investigators she had burned the paintings in her stove in the sleepy village of Carcaliu in eastern Romania in a bid to protect her son, Radu, when he could not sell them.

She later retracted the statement.

Investigators have previously said the paintings were destroyed after the thieves failed to find a buyer.