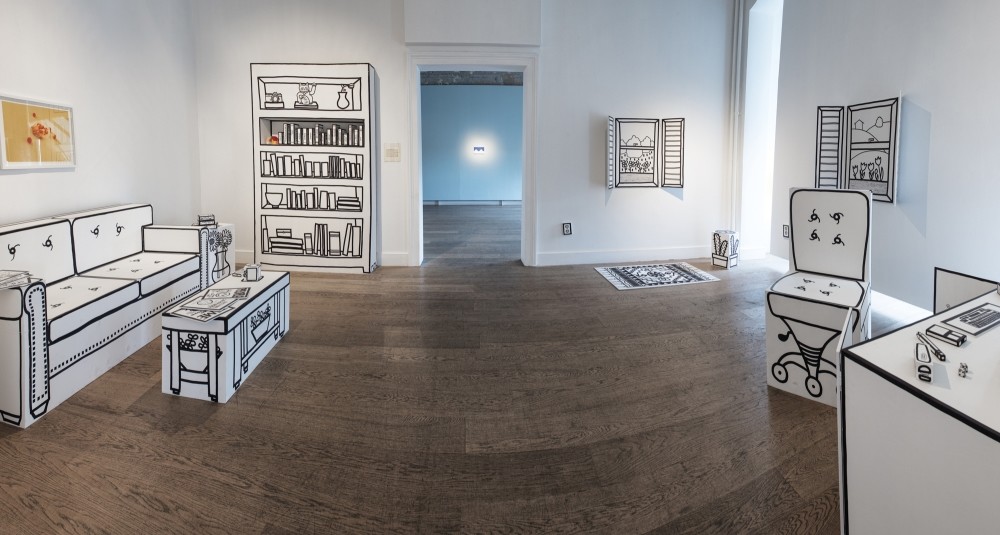 Art writer and curator Nicole O'Rourke evokes an ennui so pure it's beguiling, as during that most lukewarm of all weekly rites of passage, Sunday Morning. The fusty, indoor air of the old Roman day of the sun is rife conceptual territory for 40 works by 14 artists, visual allusions to that inescapable feeling

For those whose work makes them comfortably numb to subsistence economics, privileged enough to thrive beyond the conventional round of material exchange, the end of the weekend often doubles as an existential crisis. Sunday is traditionally the first day of the week for those who read Genesis as a revelation of the origins of light. By international standards, Sunday is the last day of the week, and it generally feels like it, especially for worldly movers and shakers who associate letting go with giving up.

There is a Biblical saying, one long worn out by its usage as a moralizer, that "idle hands are the workshop of the devil." For the 14 artists of Sunday Morning, the opposite is surely more true. Idleness has given birth to a trove of 40 new works, most made within the year. The nagging sense that time is passing, that nothing really matters, that all of life is distilled to a moment when self and world meet and realize they are each other, that just about describes the Sunday vibe for those curious types who even subconsciously question the arbitrary nature of the seven-day week along with the imposed formalities of time and its measure, courtesy of both the real and symbolic Babylon.

"Ask, and it shall be given you," reads yet another passage wrangled from the kaleidoscopic smorgasbord of oft-quoted New Testament assertions. Its voice of confidence and unearthly diversions have served to remedy the unfocused indifference that tends to seep ever so slowly into the Sunday psyche, leading the majority of seculars to binge on shows of bittersweet, tragicomic wonder, to affirm what Turks might call "hüzün," a melancholic hope, spiritual anguish, similar to quiet desperation the English way, cloudy with a chance of rain.

The first and the last

A mirror out of reach, reflecting nothing more than the wall above any conceivably organic human height conveys the ephemeral quality of a typical Sunday, one in which self-reflection is generally avoided at all costs. There is simply too much time, and the hands of the clock seem slower, leading to painful realizations of who and what might have changed in retrospect, what of life might have been passed while making other plans. That is why there are accountants, and priests. That is the gist behind, "Lover_G1302," a tongue-in-cheek installation of tempered glass, with a micro-layered polyester film frame crusted with liquid polymer resin by the artist duo :mentalKLINIK, combining the wiles of Yasemin Bandar and Birol Demir.

On the floor at the corner of the reception desk at Galerist is a puzzling manifestation of aesthetic, environmental consciousness in the form of an off-white painted wooden box. Trickster and creator Saara Untracht-Oakner sketched domestic, potted plants on its surface with a thick black marker. From the sides, the leaves are broad, stems tall. From above, the soil is visible. She communicates the sense of having created something from nothing, like the cosmic giggle heard from the void of a dawning Sunday, an unavoidable period of total disillusionment from whatever workaday logic may have ensued during the week. And she makes the space homey, as to walk into animated scenes from Sunday cartoons for children. Delightfully, her work spans the exhibition space in variable dimensions, appearing subtly as outlets installed neatly against the walls at ankle-height, the Victor mouse trap, kilim rugs.

In the innermost room, snaking through hallways and doorways, soft natural lighting is tempered and blued by the windows looking out over the Golden Horn from the hilltop district of Tepebaşı in historic Pera, adding to the daytime aura that is Sunday Morning at its most acquiescent, where every last hint of protest fizzles against the stark, nihilistic reality of a day intended for nothing, to resist action itself, to forego work, to be reduced to the commonplace and let bygones be. As the Beat writer Jack Kerouac wrote in his treatise, "The Scripture of Golden Eternity" inspired by sacred Buddhist texts, "Everything's alright, cats sleep."

In quirky, comic form, Untracht-Oakner waxes prolific through the spacious voice of her blank-slate medium, prompting a neo-minimalist fantasy of readymade coffee table and desk furniture, outdoor facades and well-lined bookshelves, accoutrements of the living room malaise that makes for the familiar setting of a Sunday morning, when everything normal seems slightly out of reach, almost unreal and undeniably made up. Each contrivance of daily life is exposed as a transparent artifice, mere bleak leftovers of the impractical aspirations that the week past drove to sheer disappointment, to listless sentiments, jaded apathies.

With a similar mind for satirizing worldly concern, Untracht-Oakner sketches a fictive National Geographic, dated current to November 2018, and placed atop the couch table in her domestic daydream. Imaginably riffing on climate change and fake news, she headlines the cover story: "Scientists Are Asking: Is Earth Even Real?" In the adjacent room, :mentalKLINIK returns with a series titled, "Some-Time," manipulating Time Magazine covers with holographic stickers for tykes, though to the effect of teasing the mainstream American narrative with playful touches that almost look seamless, conceivably the result of a design emergency in the face of extreme banality, the ultimate apolitical resignation. 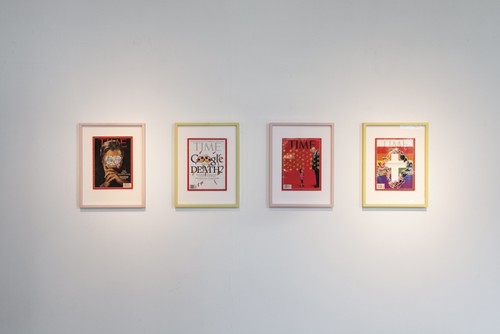 "Lately I've been pretty obsessed with the news and the state of the world and politics. I think a lot of us have. It's tiring. I wanted to organize a show that just simply wasn't about any of that, at least obviously," wrote O'Rourke, reflecting on her curation from New York. "I wanted to SEE a show that wasn't about that, too. Sunday Morning is an exhibition that subversively circles around the elephant in the room, let's say. It's meant to remind us that art doesn't have to be strictly about anything -- it can be personal."

The multi-roomed, circular exhibition space at Galerist offered O'Rourke an ideal setting for her curatorial philosophy. She dodges the tendency to impose an experience of the artworks. They are open to reinterpretation; spatially, temporally, and conceptually democratic. She posits a stream-of-consciousness style uniquely generous to her audience, facilitating limitless contextualizations of narrative and perspective within the curated interior, defined in the case of Sunday Morning by the architectural variety of introductory entrances into Galerist. 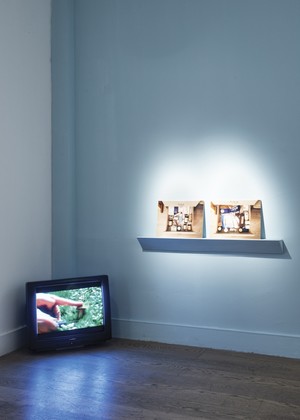 "There's a level of self-preservation for me in every work. Lara Ogel's video, 'What (else) grows in the dark,' is a Sunday morning come-down, an eerie video of pieced-together found clips about mushrooms and mushroom picking and categorization. The images and music recall the pleasure and pain of a Saturday night spent out late. Mushrooms, like night owls, do not need energy from the sun," wrote O'Rourke. ":mentalKLINIK's works reflect the attitude of a Sunday morning -- the idea that it can be anything dependent on the whos, wheres, and whens. The uncanny quality of their works, and the inability to qualify their practice as having any one particular aesthetic or material form is balanced by their ever-present attention to quotidian politics and social mores."

Presently in New York as founding director of the Ballon Rouge Collective, for which she is preparing Kathy Battista's curation of Carmen Argote's show, "Warm is a Black" in East Harlem, O'Rourke sees Sunday Morning as universally adaptable, with its colorful irony, its sense of humor which speaks to the prevailing contemporary style, less seen in Turkey than elsewhere. For her, the title concept of Sunday Morning is a reference to home, though not as a mere idea entirely divorced from place. While she experiences Sunday morning differently in her childhood home in New York as compared with her self-made home in Istanbul, there is an enduring nostalgia, renewal and rejuvenation that transcends geography and memory, perhaps instilled by what the British biologist Rupert Sheldrake termed "morphic resonance," patterns of time that sway events and behavior, a phenomenon that could explain the specific emotional quality that always mysteriously returns during the early, idle hours on Sundays.

"I was nervous putting up this show. I purposefully and intentionally went for the lighthearted which was a scarier and more daunting task than a show with a serious or weighty subject matter," wrote O'Rourke, who respects Galerist as one of the most important contemporary galleries in Turkey now in the cultural moment in terms of its artist representation and how significantly they participate in international fairs. "It's more personally revealing, and easier to criticize because I don't have some hard to understand philosophical concept to protect me. This show is a bit like stand-up comedy. It's personal, it's meandering, it's insightful when it's great, and it's a relief. And, it's difficult to pull off."