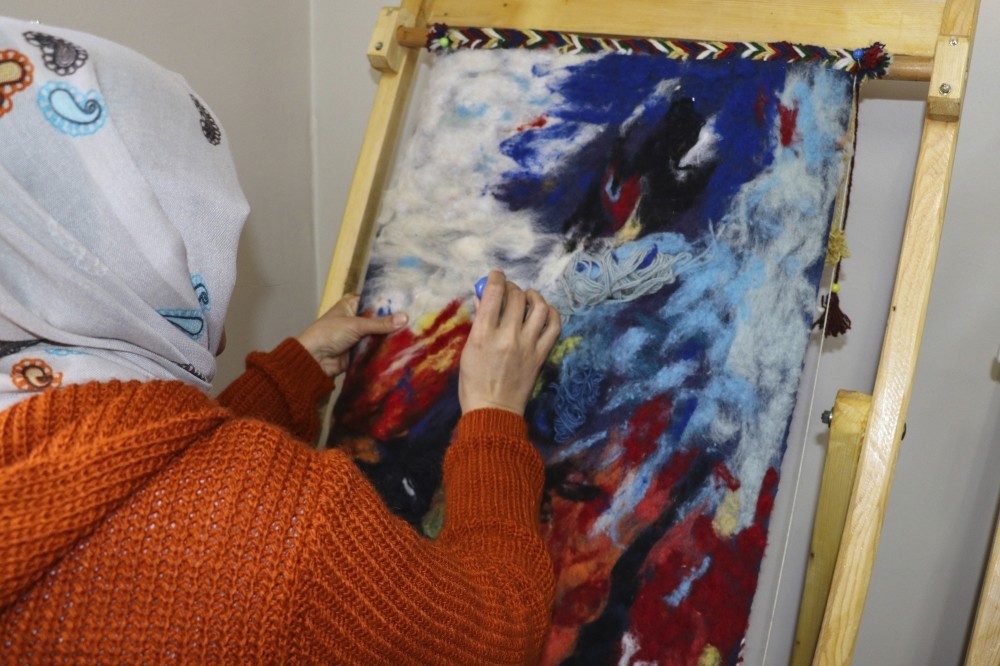 Thanks to a project by Iğdır University, the endangered art of engraving felt is being passed down to the next generations.

Inherited from Central Asia, felt has always been one of the utensils that have been used for centuries in Anatolia.

In today's world, however, felt is the main material of an art that has sank into oblivion. It was once used in many areas in the past but nowadays it has left its place to the modern reproductions due to developing technology. To help felt stay alive, Iğdır University initiated a study.

Within the study, students are taught how to engrave felt in workshops, which were founded by Iğdır University's Faculty of Finer Arts of the Traditional Turkish Handicrafts Department.

Students produce various panels, garments and home accessories by weaving felt on special workbenches just like weaving carpets or rugs. Hence, they both learn the art and are able to hand it down to the following generations.

Dr. Cavit Polat, an academic at the university's Traditional Turkish Handicrafts department, spoke to Anadolu Agency (AA) and stated that under the context of basic weaving, they developed new felt engraving techniques.

"In addition the classical techniques used in carpet weaving, as a department, we work with different techniques and styles on felt engraving. Our students quite enjoyed the new class. By teaching this art to the students, we try to hand it down to the following generations. We are also planning to promote our art work thanks to exhibitions that will be held," Polat explained.

He stated that the art is a traditional one passed down to Turks from Central Asia.

"As a nation with a nomadic culture, Turks used felt both in the winter and summer. This ancestral heritage of ours, transformed into the art of weaving on workbenches. Our friends rendered this art and started to weave the material on workbenches as if they are weaving carpets or rugs," he said.

Polat said that as experienced in many corners of the country, Iğdır also faces a time in which traditional arts are on the brink of dying out.

"As Iğdır people were mostly busy with stockbreeding, the art of felting was also quite common. However, today, it is unfortunately about to die out. Thanks to the studies conducted at the university, we are both preventing the art from dying out and we have rendered it in a more contemporary and extraordinary style while preserving it for the future. In this context, we gave a way to the usage of felt as a home accessory or garment in addition to its classical usage," he said.

Felt a material of garment and ornament

Hürşen Keser, one of the students of the workshop, said, "In our region, felt was a domestic utensil used in the highlands and villages in the past. Now, we engrave old figures on the felt we weave at the workshop. We also produce abstract painting and landscape with the material. This way, felt may be a material to work on for everyone. Thanks to the weaving process, felt can be used as painting, garment or ornament."

Hatice Mengü, a qualified instructor, also said that they weave felt on the workbenches they used to weave rugs and carpets in the past.

"We started to work to keep felt up-to-date. However, it was quite popular utensil of the past. Teaching it as an art became a priceless experience for us. We, along with our students, are so glad to be reviving this felt culture."