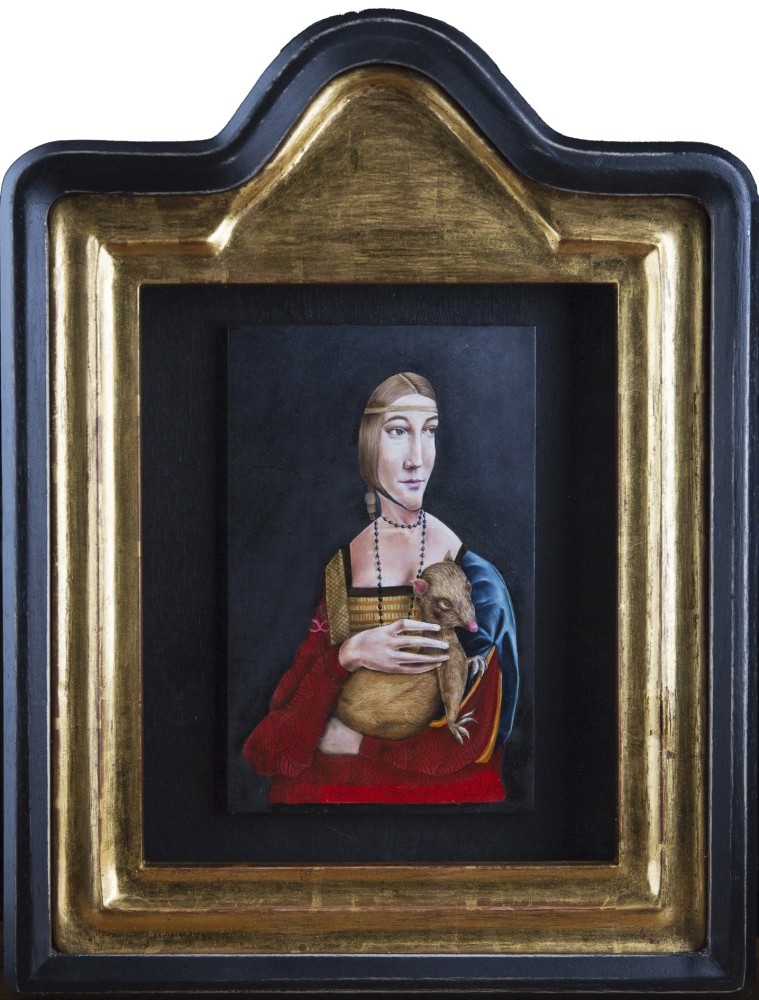 In the enigma of conceptual space between the solo and group show is ‘Introvert' by Mehmet Sinan Kuran at Pg Art Gallery until Jan. 4. It is an exhaustive, multidimensional, collaborative display of Kuran's life work, a revision of the retrospective towards what might be termed an introspective

Twenty-four hours before "Introvert" came out for an opening to remember, the inside of Pg Art Gallery looked like the earthquake expected to devastate Istanbul any year now had already struck, or that a wrecking ball from one of the countless construction projects in the city's core had missed a dilapidated Ottoman-era structure and crashed into the exhibition floor. In the winding, cobblestone hills of Çukurcuma, a neighborhood known for its many and migratory dealers in antiques and art, Mehmet Sinan Kuran and Pırıl Güleşçi Arıkonmaz argued in the furnished basement of the gallery that she had named after her initials 25 years ago.

Kuran was then in the middle of cramming the contents of his personal studio into her place of business. By the variety of sundry effects that streamed in relentlessly, the show could well have been called, Hoarder. One drawing 270 centimeter-wide, the size of her largest cellar wall, had to be fit through the back door, a feat Kuran orchestrated wearing a soft felt hat the shape of a cooked turkey while lunching on a plate of köfte (meatballs). Yet, despite the seeming unpreparedness of the veterans down below, upstairs in the main display hall, a crew of young artists worked diligently, unfazed by the warning hands of the clock.

Among them, the multitalented painter, sculptor and tattoo artist Recep Serbest was fitted in knee braces, his swollen hands soiled with the inner workings of the most immediate matters demanding his attention, as well as that of his peers who collaborated with Kuran to produce an ingenious reanimation of the art show concept for Introvert. For the Saturday night opening on Dec. 8, hundreds of Istanbul's art lovers braved the rain to see what they had heard would be a conglomeration of sights unlike they had ever seen before. Behind the opaque veils blanketing the storefront windows at Pg Art Gallery, a singular ambiance marked by the signature aesthetics of Kuran and Arıkonmaz merged to convey a year's worth of efforts by 10 artists and Bizon Studio led by Kuran. They are each of them and together skilled practitioners of a stunningly diverse range of disciplines, having crafted objects painstakingly authentic to the sweeping, mind-numbing visions that Kuran sketches, which are, in "Introvert," materialized through numerous mediums: epoxy, wood, embroidery, glass, oil, ink, acrylic and paper. Since mixed and matched, the joint curatorial eye offered a set design of an exhibition that could very well be considered as the stage backdrop for a surrealist reboot of Neverland. And there is a woman at the sweet heart of Kuran's visual narrative.

Throughout most of the bewilderingly intricate visual topography of Kuran's illustrative sketch work, made vibrant with his electric color schemes and a quirky, running style defined by contiguous, stream-of-consciousness contours, a woman appears, in many guises, often with a pseudo-religious air reminiscent of the Virgin Mary. In fact, one of his portraits conceived with Recep Serbest, affixed with an ornamental, fabric cross, is titled, "Virgin Mary" (2018), an oil painting on wood. They added a gilded Latin inscription haloed above the exquisitely drawn face, reading from a lime green book that radiates above an amphibious world of underwater vegetation and otherworldly creatures of all kinds of unusual shapes and colors.

In a masterwork of fiber art, including embroidery, applique, and beads on silk, Tuba Geçgel, 25, teamed up with Kuran to produce the piece, "A Magical Forest" (2018) over a six-month period. In it, the lady resurfaces, robed in white, standing with one arm raised like a pre-Christian goddess, seeing out of a lidless third eye above concentric circles. Each sacred hoop is a state of being, a station of the soul, revolving around a burning heart. Her presence, like a recurring dream, evokes majesty from such dense overgrowths of fine artistry.

In more domestic garb, with calmer poise, the mystery lady stares back warmly from another tapestry, "Mini-Lobster" (2018), handmade by Geçgel with gold thread, specially imported beads from Japan, gorgeously soft silk and other prime materials. The piece is enclosed by a box of smooth, clean wood framing a glass case decorated with floral drawings by Recep Serbest, an accomplished icon painter himself known to depict animal subjects. "Lobster" (2018) is the centerpiece, suspended above the entrance floor at Pg Art Gallery as a collaboration between Kuran and Burak Ayazoğlu, who has been called the epoxy artist for his knowledge and abilities with the all-pliable synthetic substance. The artists of the show agree that within the 3D-printed, 420 centimeter-long,

jumbo "Lobster," Ayazoğlu rendered the best known sculpture of Salvador Dali's actual face. Undressed in the glazed ceramic work, "Snow White" (2018), the enigmatic lady stands exposed with eyes endearingly closed, encompassed by a ring of outlined piano keys, a motif common in Kuran's oeuvre. As a visionary artist in the tradition of Hieronymus Bosch at home in "The Garden of Earthly Delights" (1515), he is intoxicated by his beloved where the late Peruvian painter Pablo Amaringo would have chosen ayahuasca. Kuran throws lightning bolts of blissful madness before his open-eyed seers. He went next-level seraphic with Recep Serbest for the epoxied oil paintings on wood, "Untainted Love" and "Tainted Love" (2018), which recall the lofty angelic beings that float down from Hagia Sophia to greet world wanderers and reincarnate pilgrims.

Like a millennial jazz performer transcribing a legendary improvisation from the previous generation of greats, Recep Serbest produced another oil painting on wood, framed elaborately with a gothic tinge, after Kuran's piece of waterproof ink on paper, "Sad Sister" (Hüzünlü abla, 2018). Together, they echo the harmonies of devotion to an art form symbolically iconized by divine love for a woman. Unlike certain interpretations that would identify the extreme asceticism in Orthodox Christianity and its painting for a stream of religious minimalism akin to the music of Arvo Part, Kuran instills a more personal touch that is just as complex as much of the historical canon in the approaches to painting that he recalls like a mad monk binging on mystical union with the muse. Finally, his direct visual quote of Leonardo da Vinci's 1490 painting, "Lady with an ermine" for his eponymously titled work with Recep Serbest has all of the provocations of eternal genius, where the contemporary artist duo

challenges not only the ultimate test of the creative to do the impossible just once, but to parallel such human proximity to perfection in visual form. There is an absorbing power to the image of a woman who exacted da Vinci's conceivably limitless mental capacity. And more than 500 years later, she continues to enthrall two postmodern men, an elder artist and his protégé, with her only visible, well-built hand firmly pressed against the white coat of an ermine, that curious member of the weasel family whose fur adorned ceremonial garments in the high courts of Europe.

A meeting with a remarkable man

"The worst thing about this century is that everyone is trying to do something by themselves. I believe in collectives, collaborations, and wholeness in terms of human psychology. Everyone wants power, money, and ambition. I love all humans. We must learn collective life because the world has big troubles, with climate change, species extinction," said Kuran, enjoying the fruits of his fourth solo show despite never having attended art school, yet as a lifelong drawer with stacks of sketch journals and now an older self-made artist, he mentored younger artists for Introvert, whose names are generally unknown to gallerists and collectors.

"Introvert, the word, signifies a rich inner life, but I'm a social monkey. I love young people. They have very rich minds. My generation has lost its curiosity. Younger generations have less, and value little money," said Kuran, who began collaborating for Introvert after Recep Serbest gave him a tattoo in Kadıköy. "Introvert affirms collaboration. I'm spiritual. I hate polarization in politics or relationships. I embrace all."

During a solo show by Kuran at Pg in the recent past, he occupied an entire wall 6 meters wide every day for over 30 days in front of crowds performing a public communion within one impromptu, shared drawing. Introvert transformed Pg to yet another degree, replacing its bare floors with turf under dim lights reflecting off the ebony enclosure that has been greened, wooded and cultivated with the sprouts of a high mind joined to its roots, to the youth who will blossom and one day take over the air, monopolize the sunlight, and flower into a beauty returning like the woman in his visions, as a perennial in spring after winter's vanishing.