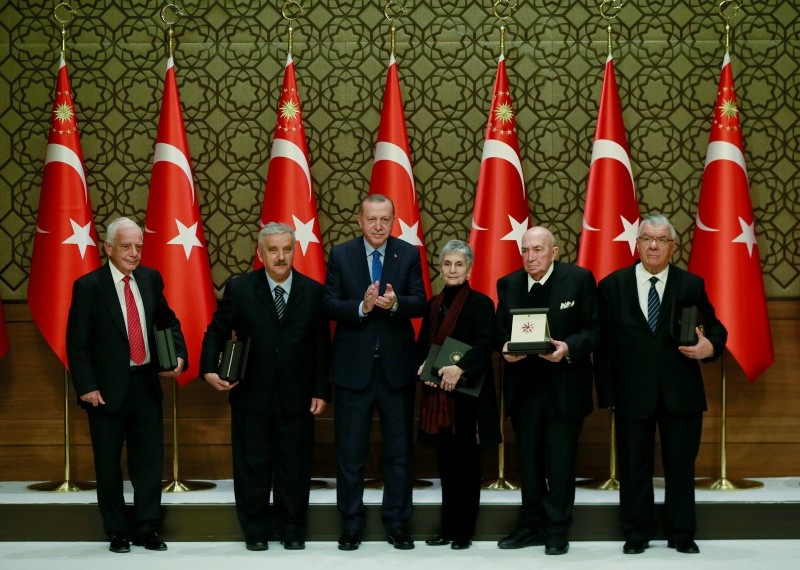 Speaking during the official awards ceremony at the Presidential Complex in Ankara, Erdoğan stressed that culture was one of the symbols of a nation's independence just like its lands, army or currency.

"Culture and art are, by their nature, civic and free, and will never accept tutelage. It is not possible for art to grow and develop properly in totalitarian regimes that impose monotony," Erdoğan said.

In the history and social sciences field, the Council of Culture and Arts Policies chaired by Erdoğan awarded Mehmet Ipşirli, a veteran Turkish historian.

The council named Türker Inanoğlu, a prominent film producer, director and screenplay writer, as the winner in the field of cinema.

Erol Sayan, a composer, received an award for his achievements in music.

Mehmet Akif Ersoy, who is known as the "national poet" of Turkey and the author of the Turkish national anthem, was named the winner of the Loyalty Award. His award was posthumously presented to his granddaughter Selma Argun on his behalf. 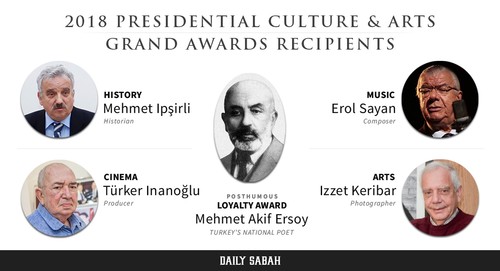 Erdoğan congratulated each of the esteemed representatives of the culture and art world. "I would like to express my gratitude to these distinguished people for their contributions in their own fields to the great journey of our country and our nation from past to the future. As I always say, we give the Presidential Awards as a mark of appreciation of our nation and our state toward our culture art people," he said.

Cultural power is of utmost importance

"When we look at the most powerful countries in the world, we see that they came to this position with their cultural powers rather than their armies. Nowadays, the culture industry has reached such a level that there is no place left in the world that it has not reached and affected. From cinema to music, from clothing to technology and architecture, we see this impact. This fact pushes us to go into our culture and art policies wholeheartedly," Erdoğan said.

President Erdoğan highlighted the need for an all-out effort as a nation to boom in the field of culture and arts.

"Having undertaken great revolutions in democracy and economy in the past 16 years, Turkey unfortunately could not cover the desired distance in education and culture-art policies. In fact, it is not in the nature of this work for developments in this area to be provided by state projects and public facilities alone like other investments. As a nation, we can carry our country forward in culture and art through an all-out struggle because these activities are ultimately based on individual effort and individual productivity. The task of the state is to establish a climate where individuals can make this effort. Hopefully, in the new era, we will take much bigger steps together in this direction," Erdoğan said.

Erdoğan emphasized the importance of embracing the culture as a whole, with the heritage from the past included. He pointed out that Turkey's last century refers to a period of great breaks in terms of culture and art as well as political and social fields.

"For example, in this process, our language has undergone such a great change that grandparents have become unable to communicate with their grandchildren. In the same way, we experienced very serious changes in our taste in music. We can witness the signs of this problem in every area, from clothing to food and drinking. This is one of the leading causes of the drought in our culture and art world," he noted.

'The loss is sought where it is lost'

The president said, "Our task as a nation is to search, find, reinterpret the three visions of our civilization, namely good heart, good taste and good sense, in our own history and in our own past and bring it to the future."

"We will enrich our hearts with good heart, our souls with good taste and our minds with good sense. Civilization is essentially a construction activity. The foundation of this activity is science and wisdom. For a long time, we turned our backs on the heritage of the ancestor's glorious civilization and condemned ourselves to shanties in every area. However, in our history, science and art people have a special place," he said, reminding people about the rich treasure the Turkish nation inherited. He also added the traditional saying, "The loss is sought where it is lost."

Erdoğan reinforced his expression with a reference to Ottoman Sultan Suleiman the Magnificent, who said, "Even though there is nothing in my time, it is enough bliss to have a poet like Baki."

The president reminded that the Quran offers a clear path with its words, "Our Lord says, 'Don't you think?' to us repeatedly in the Qur'an, showing us the path we are supposed to take.

"This is what we must do to overcome the infertility in the field of culture and art, among other things; that is to say, we use our minds, we take lessons from the past and present," he continued.

Life of national poet an example

Erdoğan added that the life of Turkish national poet Mehmet Akif Ersoy, who wrote the national anthem, is a perfect example to find our path.

"Even the idea legacy of the late Mehmet Akif Ersoy, whose heir will be granted the Loyalty Award, alone is rich enough to pave new ways ahead. The Turkish national anthem, which describes the spirit of our War of Independence, and the Çanakkale poem, the epic of the re-rise of our nation, and his other works, each containing distinct messages, had Mehmet Akif's name written in history in gold letters. Mehmet Akif Ersoy's life and the works that he left behind are the reward given to our nation on their own. We, as the state, are taking important steps in the hope of preserving the legacy of the late Akif."

The Ministry of Culture and Tourism has expropriated the apartment on the fourth floor of Mısır Apartment, located in Beyoğlu, Istanbul, where Mehmet Akif Ersoy lived. "We are transforming this apartment, where our national poet spent his last days, into a museum where many works and personal belongings of our national anthem poet will be exhibited. I believe it will give future generations, in particular, the opportunity to get to know the master more closely and understand him," he said.

"Turkey needs new literary figures like Mehmet Akif, Ahmet Hamdi Tanpınar, Necip Fazıl, Nazım Hikmet, Arif Nihat Asya and Kemal Tahir. In the same way, we cannot preserve our originality in music without raising new artists like Dede Efendi, Itri, Hacı Arif Bey, Aşık Veysel, Muzaffer Sarızözen and Neşet Ertaş. We must raise architects who will form the schools that will continue in their field for centuries like Sinan the Great. I believe that the next period will be transformed into a new era of upheaval for our country and for our nation, with the support and efforts of our precious culture and arts people here," Erdoğan said, stressing the need to raise new generations of artists fed from our inherent cultural values. "Turkey has to uphold the values of the past on the one hand, while raising new culture and art people following this path," he added.

Erdoğan said that the biggest problem in Turkey is that a group that underestimates its own society and its own country has "captured our culture and art world for a long time."

"Thankfully, this bondage is slowly disappearing. Particularly among our youth, we see the rising of a strong rapture, a quest, a questioning that gives us hope in the name of our future," he said, indicating his faith in the youth.

Last, President Erdoğan noted that an important pillar of the 2053 and 2071 vision of Turkey would be culture and art. "Today, no matter where we go in the world, when we turn on the television, we come across a television series made in our country. So, when we work, when we put effort, and when we struggle, we are able to achieve results even in a highly competitive field such as TV. I see no reason why we should not show the same achievements in other areas," he concluded.

Historian Mehmet İpşirli was born in 1944. İpşirli completed his Ph.D. at Edinburgh University between 1971 and 1976. He started working as an assistant in his major department in 1976. He became an associate professor with the thesis "The Institute of Kadıaskerlik (Ministry of Justice) in the Ottoman Empire" in 1982, and he rose to professorship with his "Court Registry in Terms of Diplomacy" in 1988.

A doyen of Turkish cinema, director and producer Türker İnanoğlu was born on May 18, 1936, in the town of Safranbolu in Karabük province. İnanoğlu established his own company Erler Film in 1960, which is still one of the oldest and longest-lasting movie companies in Turkey. İnanoğlu directed 66 feature films in total. His life is described in detail in the book "Mr. Cinema" written by Giovanni Scoglamillo.

Veteran musician and composer Erol Sayan was born in the district of Araç in Kastamonu province in 1936. He started his music studies in 1954. Until 1964, he taught theoretical music lessons at the Male Technical High School Teachers' School and continued his chorale works. Erol Sayan teaches repertoire in the Istanbul Technical University Turkish Musical State Conservatory. The composer has around 310 compositions in various forms and modes, 156 of which are included in Turkish Radio and Television (TRT) repertoire.

İzzet Keribar was born in 1937 in Istanbul, and he started photography with his family's Zeiss-Ikon camera, gaining fame as a highly skillful and productive photographer. He pursued his interest in photography after his brother's interest began in 1952, and he bought his first camera at the age of 17. He purchased a German Regula and a Leica IIIf after a year.

He holds various prestigious awards. He won A. Fiap (Artist) and E. Fiap (Excellency) titles from the International Photography Federation. He also received the title Academic Success Chivalry from the French Ministry of Culture. In addition, he came in second place and first place at the Fuji European Press awards and received the Grand Art Prize of the Ministry of Culture and Tourism in 2011.

The artist can speak Turkish, English, French, German, Italian, Spanish and Greek and is a member of the Istanbul Photography and Cinema Amateurs Association (İFSAK). He still teaches photography at many institutions.

Mehmet Akif Ersoy is the author of the national anthems of both the Republic of Turkey and the Turkish Republic of North Cyprus (TRNC). Many refer to him as a "national poet." Along with the national anthem, some of his most important works are "Çanakkale Destanı" ("Çanakkale Legend"), "Bülbül" ("The Nightingale") and "Safahat" ("Phases"), combining seven poetry books published from 1911 to 1933. He was also a Member of Parliament during the War of Independence.