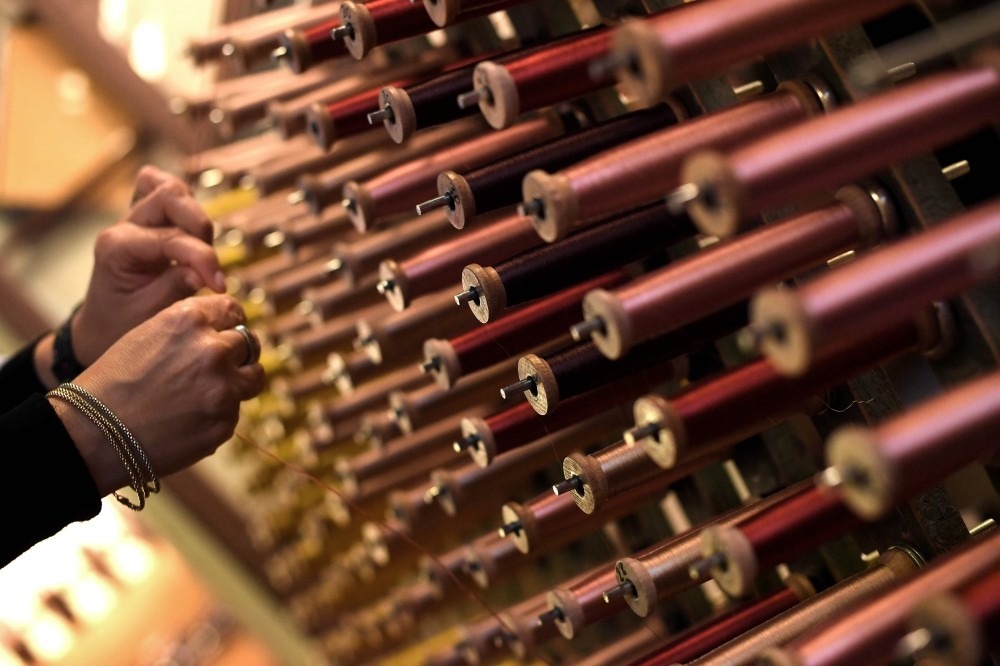 A close-up view of reels of thread in the laboratory of Antico setificio Fiorentino ancient silk factory in Florence. - Antico Setificio Fiorentino was founded in 1786 and is one of the oldest silk workshops in Europe.
by Dec 20, 2018 12:00 am

Five hundred years after the death of Leonardo da Vinci, a silk mill incorporating one of his designs is still shuttling some of the finest threads in the world across its looms.

Tucked away in the historic San Frediano neighborhood in Florence, L'Antico Setificio Fiorentino was founded in 1786 and is one of the oldest silk workshops in Europe.

Its looms date back to the 17th, 18th and 19th centuries, but the jewel at its heart is a machine to unwind the reels of threads, designed by Renaissance genius Da Vinci, who died in 1519.

"It is a warping machine made in the late 17th century according to the maestro's original design, and we still make passementerie (tassels, cords, trimmings) today" using it, silk worker Beatrice Fazzini told Agence France-Presse (AFP).

The polymath's device is used to prepare the threads before they are placed on the loom, following a technique that has been closely guarded down the centuries.

The workshop, which since 2010 has belonged to the family of Italian fashion designer Stefano Ricci, manufactures fabrics, lace and ribbons in styles and colors favored by the historic House of Medici, an Italian banking family and political dynasty.

It was during the Medici's rise to power that silk manufacturing enjoyed a boom along the banks of the Arno River.

Fabrics produced by L'Antico Setificio Fiorentino can be found in places of grandeur both home and abroad, from Italy's palaces and the famous Uffizi Galleries in Florence, to the royal residence in Denmark and the Kremlin in Russia.

"It's a museum that is also a factory," said Briza Datti, interior designer and head of the commercial sector.

The hand looms move to the weaver's rhythm and bear "the imprint of the family to which they belonged in the past," she says.

The designs and fabrics produced down the ages are preserved in the workshop's historical archives, which can be visited by school children or tourists.

The 15 or so artisans that spend their days teasing threads say it is a privilege to produce precious fabrics in silk, linen and cotton once used by kings and emperors.

"I'm lucky to work here, surrounded by centuries-old looms, but it doesn't feel like a museum, just a special environment," says Simona Polimeni, who trained at the school of weaving and restoration in the Tuscan capital.

"Each fabric must be woven by the same person. The rhythm must always be the same, or you risk imperfections," the 26-year old says, as she crosses the warp and weft threads in an echo of age-old gestures.

No fewer than eight hours of work are needed to produce two meters of this fabric, worthy of the court of 15th century Italian statesman Lorenzo the Magnificent himself.

On one of the looms, 50-year old Silvana expertly shuttles shimmering colors, from mustard yellow to fuchsia and petrol blue.

The Brazilian, who came to Italy 30 years ago to work in the world-renowned textile industry in Tuscany, said she is proud to have such "a very creative job, in such an area of excellence."