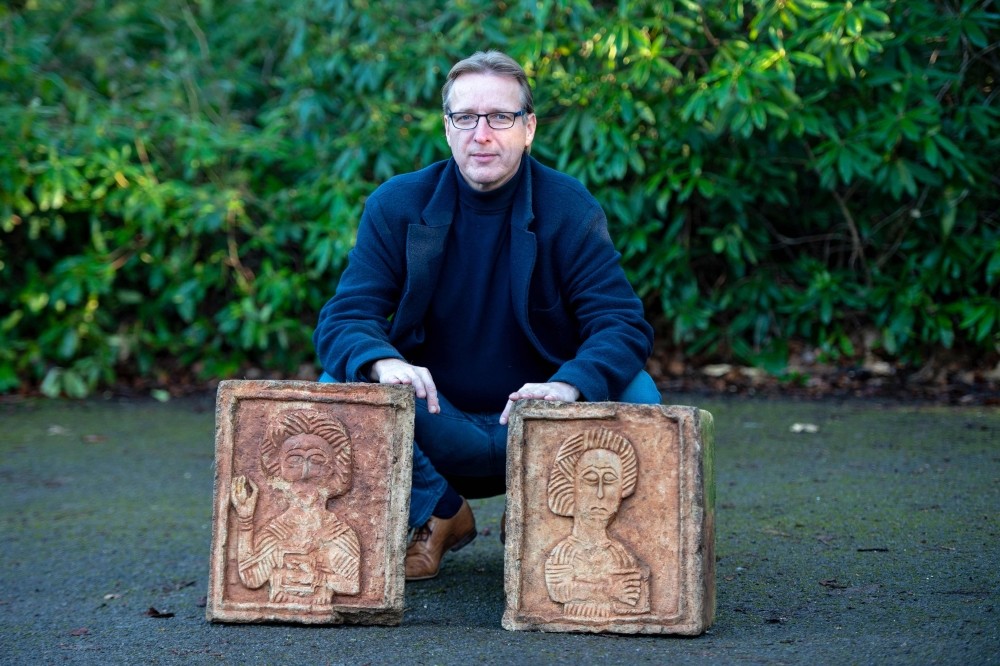 A Dutch art detective has returned two priceless stone reliefs stolen from an ancient Spanish church after tracing them to an English nobleman's garden where they were displayed as ornaments.

Arthur Brand, dubbed the "Indiana Jones of the art world," said he handed over the centuries-old carvings to the Spanish embassy in London at a private ceremony on Monday.

It was the culmination of a long search for the artworks, which were snatched in 2004 from the Santa Maria de Lara church in northern Spain, believed to be at least 1,000 years old. They turned up in the garden of an aristocratic British family who had unwittingly bought them, and it was there that Brand found them covered in mud and leaves.

"These artworks are priceless. To find them in a garden after searching for eight years is just incredible," the art sleuth told Agence France-Presse (AFP).

"You can imagine how horrified they were to learn that their garden ornaments were in fact priceless stolen Spanish religious art."

The private investigator showed AFP the stone carvings - one of which depicts John the Evangelist, author of one of the Gospels - hours before they were handed back.

The reliefs, said to weigh 50 kilos (110 pounds) each, were then handed to representatives of Spain's Guardia Civil police force, who are collaborating in the case, and two museum curators from the northern city of Burgos.

The hunt for the artworks could come straight from a detective novel.

The church from which they were stolen is believed to date from the era of the Visigoths, with experts dating it between the seventh and eleventh centuries.

But in a huge blow the reliefs were snatched by professional art thieves in 2004, Brand said.

In 2010 the intrepid sleuth first received word from an unnamed British informant that "something strange" had popped up in London, which eventually pointed him to a shadowy man Brand referred to as 'Mr X'.

"It turns out 'Mr X' saw a French dealer arriving with the reliefs by truck in London. They were put on offer as garden ornaments - but Mr X recognized them as possible Visigoth religious artworks," Brand said.

"The guys who stole these wanted to sell it for a couple of millions or whatever, but they have soon find out that you can not sell these, so to make at least a little bit of money, they sold them as garden ornaments," he said, adding that they were probably sold for around 50,000 pounds ($64,330) each.

Brand then tracked down the French dealer, who pointed them towards an unnamed British aristocratic family living north of London.

"It ended up in the garden of an English nobleman, who did not know that it was world heritage, where they would stay like 15 years," he said.

The owners were so shocked when told the truth that "they wanted to throw the artworks into a river and let them disappear forever. Fortunately we managed to convinced them not to," said Brand.

It was yet another success for Brand, who was in the headlines last year for returning a stolen 1,600-year-old mosaic to Cyprus that was found in the possession of a similarly unwitting British family.

The recovery of the artworks could also play an important role in revealing more about the mysterious Santa Maria de Lara church near Burgos.

The church was effectively lost for centuries before being rediscovered in 1921 by a local priest and declared a national monument in 1929.

Inside, the church has Christian, but also pagan, Roman symbols and Islamic influences - "worthy of a Dan Brown novel," Brand quipped.

The stone reliefs "are of huge value," said Rene Payo, an art history professor at the University of Burgos.

"They are important because not many exist today. There are very little... quantities of Visigoth figurative sculptures," he told AFP. The Visigoths settled in Spain between the fifth and eighth century after driving out the Romans, but were themselves overthrown by the Moors in 711.

The looted artworks could also be "essential" evidence in a debate raging among scholars about the exact age of the church, said Oxford University researcher David Addison. Addison said some believed it was a 7th century building while others dated it to the 10th or 11th centuries.

Brand's return of the artifacts "would be a great service in this regard," Addison said.