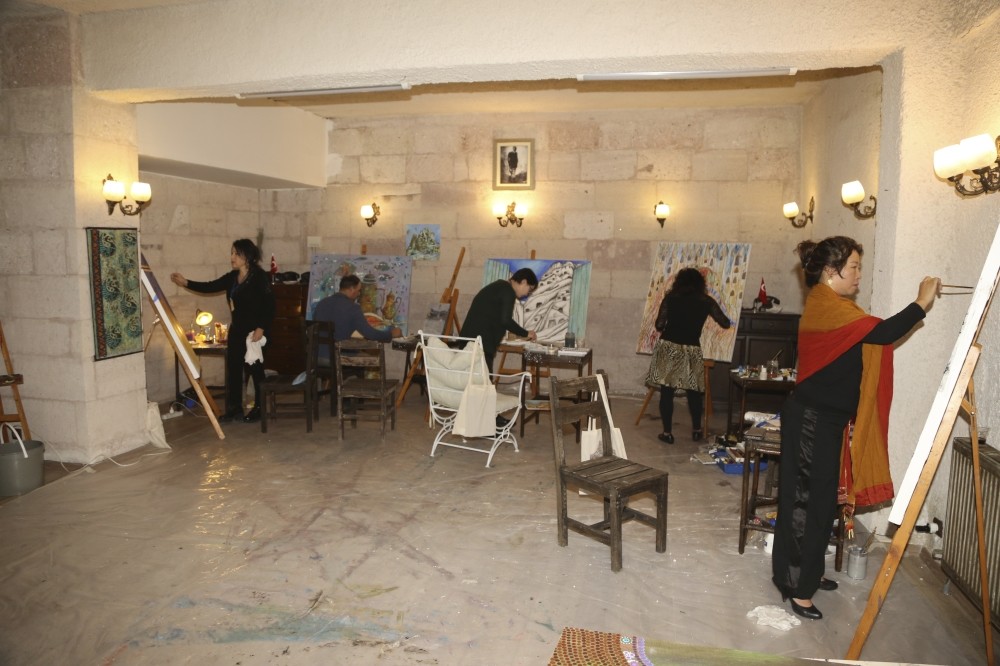 Ten painters, sculptors and graphic artists will participate in the camp held in Nevu015fehir.
by Anadolu Agency Jan 25, 2019 12:07 am

The International Cappadocia Art Camp, which is being held for the 16th time this year, started with the participation of 10 artists from 9 countries. 10 painting, sculpture and graphic artists who are participating to the camp held in Uçhisar, one of the touristic districts of Nevşehir with boutique hotels carved into rocks, are from the U.K., Uzbekistan, Tunisia, Czech Republic, TRNC, Mongolia, Kosovo, China and Turkey.

The works created by the artists will be displayed at the end of the camp.

The host of the organization accommodating the camp, Abdullah Şen, noted that they are organizing the art camp for the 16th year now.

"The Cappadocia region is a geographical area that welcomes both the Turkish Islamic Guild Member Ahi Evran who says 'we need to work harder' on one hand and, Hacı Bektaş Veli who says 'we need to share' and Rumi who says 'Come again whoever you are,'. Therefore, our main target is for artist coming to this geography filled with energy to add something to its soul, to promote Cappadocia and to present examples of Anatolian hospitality," said Şen.

The honorary guest of the art camp, Oğuz Demir, said that this event contributes culturally to the region and added that it is the meeting point of beautiful hearts. "Artists from 9 countries are here together with the same language, same heart and same beliefs. We again witness that art does not know any boundaries," added Demir. The International Cappadocia Art Camp will continue until 27 January.