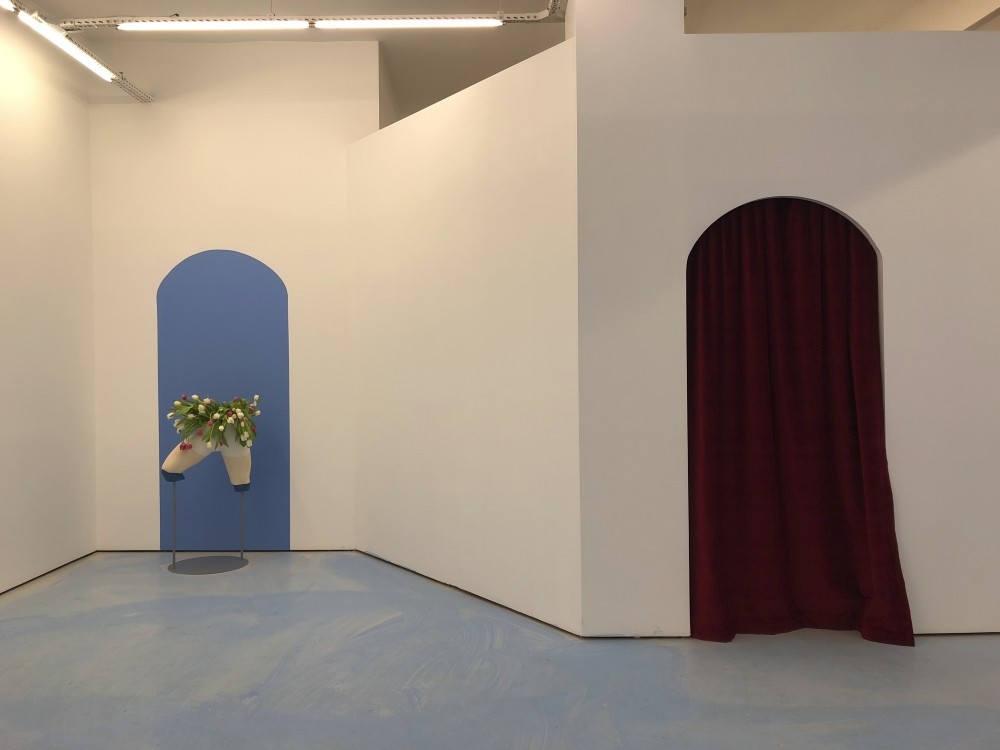 The Pill in Balat transformed into a discreet baby blue atmosphere for ,Memories of a solitary cruise, by Soufiane Ababri, on display until Feb. 23.
by Matt Hanson Feb 02, 2019 12:25 am

The Pill, a contemporary art gallery in Balat, is hosting a curious show by Moroccan artist Soufiane Ababri, whose childlike body of work is on display along the Golden Horn till Feb. 23. "Memories of a solitary cruise" touches on Anatolian wrestling and Disney orientalism

A red curtain drapes from the clean, off-white archway, over the floor onto a wash of pale, baby blue. Its streaks of flowing strokes are mopped by a barefoot Anatolian wrestler, who enacted a custodial performance art to color code the interior of The Pill with an atmospheric azure, reminiscent of a newborn boy's sparkling new bedroom, as seen from the cradled, blurry eyes of the infant himself.

The double curtained, ruby-hued entranceway waved warmly during the casually discreet though well-attended, mid-January reception at The Pill, a relatively new gallery in the contemporary Istanbul art scene distinctive for bringing Francophone artists from North Africa and Paris in dialogue with the Turkish worldview at its most active, creative source in the ancient imperial capital.

Where a medieval chain once secured the breadth of the Grecian inlet known as "Haliç" in Turkish, meaning estuary or sound, The Pill is situated along a busy multilane thoroughfare, somewhat inconspicuous surrounded by old Phanariot taverns and an ever-expanding archipelago of new cafes in one of Istanbul's most rapidly gentrifying historic districts. Behind its sheen of opaque white, its storefront and sign blend with its neighboring urban industrialism.

Soufiane Ababri stood inside, confidently poised to meet his muse, as human figures walked within his frame aplenty. He fielded impromptu conversation, delighting in the colorful mix of locals and seers who sauntered in to bask in the world of his imagination. The Pill was transformed through his inner eyes, with hints and graces both subtle and overt.

Smatterings of handwritten lyrics, bookended with eighth notes, were graffitied across the wall with a loose hand, something out of the secret fort of a preadolescent, given to such charm. The words are by none other than Howard Ashman and Tim Rice, who wrote to the music of Alan Menken for the classic Disney film, "Aladdin." In a twist of logic as confounding as the animation's unreality itself, Ababri conceived of his show after learning that 41 percent of Trump's voters agreed to bomb Agrabah, the imaginary land of Aladdin.

If there are any, the future survivors of modern history will study with eternal fascination how by the end of the second decade in the 21st century, the people least knowledgeable of the world had become the most powerful. But these theoretical students in times to come might discover that these Americans, like the dinosaurs, were also utterly incompetent before earthly evolution, to the extent that they had confused the fictions of preschool cartoons with the militarization of foreign policy.

There are conspiracies in circulation that dash the innocence of Aladdin, pointing to suggestive subliminal messages that directors Ron Clements and John Musker deny. But as a new, live-action version of the beloved 1992 film is on its way in 2019, the speculation is renewed. The juxtaposition of purity with obscenity might simply bind and balance a yearning, provoking the collective subconscious to the point of manifesting fantasy. It is that tension of vulnerability and fancy that Ababri spotlights with vivid lucidity in his works.

He intentionally uses colored pencils generally marketed for kids, and his figures, deceptively basic, are gorgeously naive. He is a master of proportion and its dissonance in the best tradition of post-Cubist expressionism. Spread across a neat iconostasis of frames somehow eerily similar to the one down the street at the Greek Orthodox Patriarchate, his most recent series conveys a delirious pantomime of observational humor.

Ababri is an outsider in Turkey, yet, as a millennial artist born in Rabat, Morocco, his eye is set deeply into the weary sockets of his subjects. He intuits the regional airs of Anatolian men. As the show comments particularly on the male world, its brute, animating power and the blaring contours of its becoming, Ababri places himself into his work with pervasive omnipotence. When the academic Cüneyt Çakırlar wrote an essay on the art practice of Ababri, he considered his subjectivity in the context of liberation and citizenship as modes of social and personal power designed and enforced principally by men.

Ababri identifies as an immigrant, as brown-skinned and a member of the post-colonial generation of Moroccans at work in France. In certain ways, bygone conflicts do not end but are transformed by peacetime methods of exchange and interaction between peoples who remain divided by groupthink concepts based on the innate, involuntary diversities of human biology, communal localization and cultural development.

To be a man

In defiance of martial discipline, Ababri is reputed for what could be understood as his French New Wave sentiments. Like the anti-hero of Godard's famous, genre-defining 1960 film, "Breathless," he stakes his claim to fame within the malleable frame of a mattress. In the comfort of a soft, interior room of his own, he produces what he brazenly terms, "bedworks." Çakırlar explains: "The bed becomes the studio." 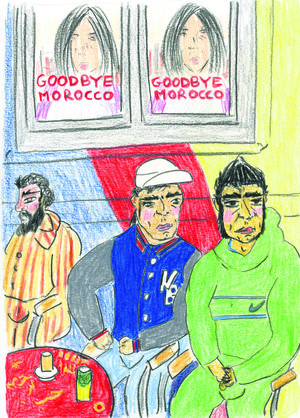 Identity implies the other, as all opposites do. As much as Ababri is aware of his peculiar, physical and conceptual self, so he pores over exaggerations of exoticism, reversing the Orientalist lens toward the characteristic embodiments of Western stereotypes. In not a few of his sketches, roughly outlined though gentle at the core as the posture of masculinity in contrast with its emotional center, he emphasizes light skin. One drawing pictures a multiethnic family, with a paternal type wrapping his arms of pink flesh around the necks of two children whose complexions represent markedly darker pigments.

There is, in the pairing of spectrums, a figurative symbolization of what Çakırlar calls "diasporic double consciousness." An interpretation of the phrase would lead to apt reflections on the nature of immigration and assimilation as the transition from empires to nations has invariably demanded a social dialectic of race relations, which essentially means that nationalism's success is due in no small part to those on the margins of civilization's progress, and that Western modernization, in practice, could never have happened without the immediate and encompassing presence of former colonial subjects. 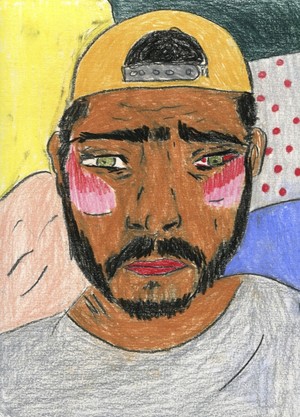 Ababri and his work reminds the international public and its global citizenry that the stories of darker pasts are still being told and that its tellers are coming to light not only to speak for themselves but to envision an inclusive order of worldly existence in which all stripes of people are seen, as integral to the jigsaw puzzle of humankind. A recurring aspect in the show, "Memories of a solitary cruise" is that of replicas of the arched and curtained entranceway in a strict outline of nontransparent blue paint. In front of these portals of color, bouquets flower out of the torso of sculptures depicting thighs in wrestling shorts. It could be that the likeness of a new man has yet to blossom to fullness, but it is sprouting with the vibrancy of life's beauty.

A new crop of voices

"What I am trying to understand with my work, and as my projects progress is the role of violence in the history of forms and the position of minorities within this so-called history of art," said Ababri, during the making of his past exhibition, "Here is a Strange and Bitter Crop" at SPACE studios in London, in which his late fall show dressed the gallery in a style akin to the current interior design at The Pill.

"How those systems of social domination come to infiltrate and contaminate systems of representation and the economy of work. It is the idea of how to have a political and engaged practice without using the vocabulary of the dominant power. I constantly review and manage the work in order to build a story and a position against the system that surrounds me."

In the same way that Americans descended of African slaves and indigenous peoples reclaim the words that once derogated them to inferiority, Ababri critiques his place in traditional Eurocentric society to see differently and defiantly, to draw aware of his alternative perspective. He is inspired by the common habit of snapping smartphone photos. But he does it with a sideways glance, stealing, as he says, the attitudes of appeal that men exude in public, at work, and in otherwise complete privacy.

"For the past 5 years, I have mainly been working with drawing. In fact, it was a conscious decision to stop what I was doing before, a sort of radical break with what I had learned in art school and in the normative and stereotypical French educational system where drawing has no important place and is often marginalized and is considered as a lower art form or something preliminary," he said, echoing the greater complexes of societal prejudice.