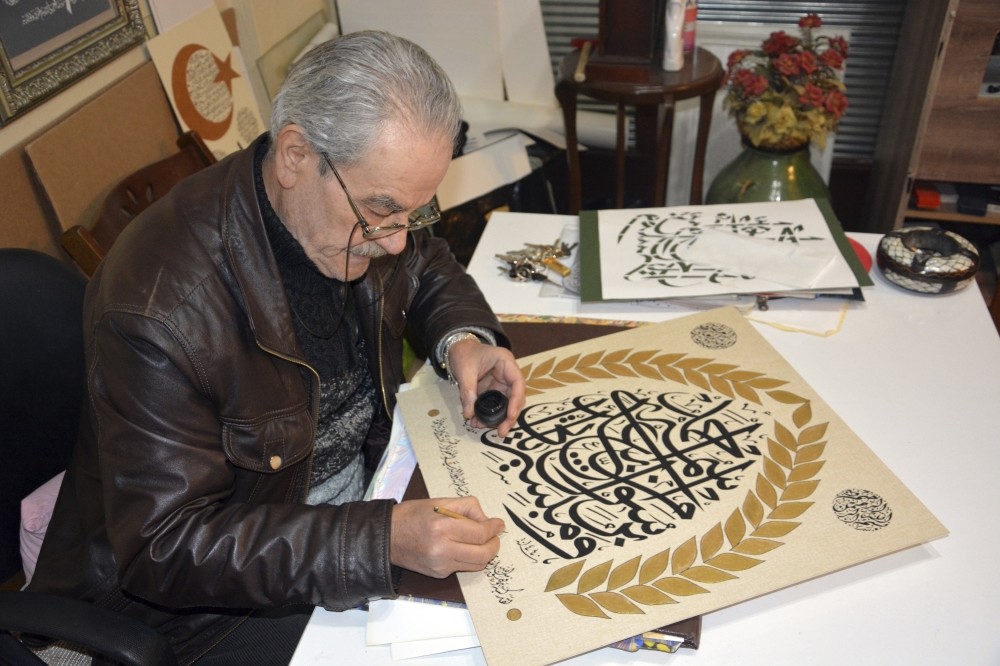 Syrian calligrapher Hasan Muslim works in a small workshop and provides free lessons to those who want to learn calligraphy in Malatya province.
by Anadolu Agency Feb 02, 2019 12:25 am

Syrian calligrapher Hasan Muslim, an academic who worked at the University of Aleppo Fine Arts Faculty as well as at universities in Saudi Arabia and Bulgaria, came to Turkey nearly six years ago and settled in Malatya. The calligrapher has continued his works there and teaches his craft for free

Calligrapher Hasan Muslim came to Turkey after escaping the Syrian civil war six years ago. He moved to Malatya and restarted his life in the city. The 67-year-old now works from a small workshop in the city center and provides free lessons to those who want to learn calligraphy. His motivation is to sustain the art of calligraphy and transfer it to the next generation. Muslim has created many beautiful works to date and has donated those with the names of God and Muhammad written on them to 20 mosques in Malatya, Gaziantep, Istanbul and Ankara. He also sent some of these works to some mosques in Germany and Libya.

Speaking to Anadolu Agency (AA), the calligrapher said he had to come to Turkey because of the civil war in Syria, where he was an academic at the University of Aleppo.

He said he moved to Malatya with his family after coming to Turkey where they then restarted their lives. Muslim thanked Turkey, which opened its doors to them. He added that he also worked as an academician in Saudi Arabia and Bulgaria and trained many calligraphers. Noting that he visited 53 countries, he said that he has held exhibitions in all of them. 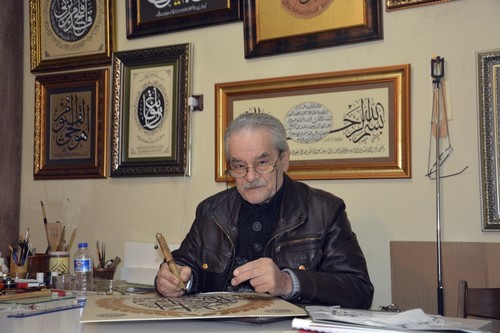 Hasan Muslim noted that he visited 53 countries, and he has held exhibitions in all of them.

Stressing that he continues to pursue the art of calligraphy, which he loves and has dedicated his life to, Muslim said: "I opened a small workshop here and have some trainees. The art of calligraphy should continue and not disappear. This art is a memory from the Ottoman Empire."

Muslim reported that he is of Turkmen origin and that he wants to remain in Turkey after the end of the civil war, selling his properties in Syria.

Implying that everybody wants to go to the West but he did not want to, even though he had many chances, "Canada accepted us as refugees six years ago but I did not go. Thank God, I am really pleased with my life. I live well here. Turkey is better than Europe for me. We produce everything by ourselves. Turkey is a big country. What else can I want? When I go to Europe, I do not know their language. When I say 'hi' in Arabic here, at least 10 people return the salutation. I thank President Recep Tayyip Erdoğan," he said.

Speaking of the art he has donated to mosques in different cities and countries he said, "Thank God, I have left a memory wherever I have gone."