A Glimpse into the Void: Artist plays with forms and colors in depth 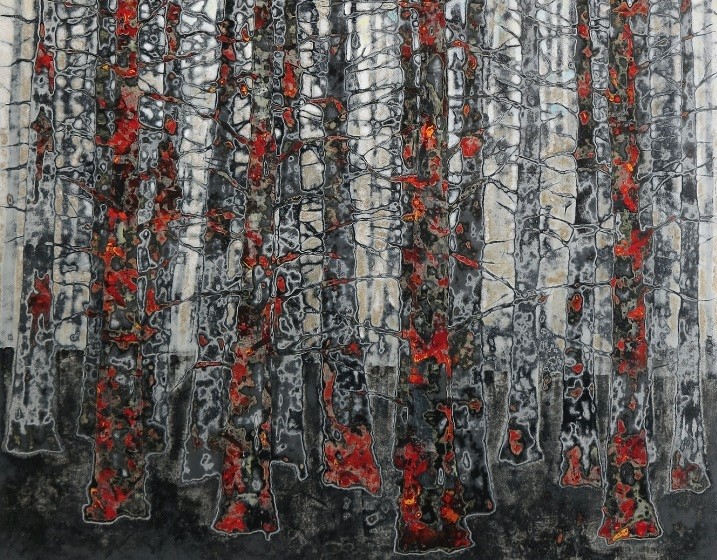 Located in Istanbul's Karaköy quarter, Galeri 77 is currently displaying Mesut Karakış's first solo show ‘A Glimpse into the Void,' where he creates an extraordinary perception of depth with forms and contrasting colors

Galeri 77 is hosting Mesut Karakış's first solo exhibition, "A Glimpse into the Void." By utilizing unequivocal patterns, the artist renders the relationship between forms, shapes and colors with unorthodox technique. Although the point of origin in his works are natural patterns, the artist desires to create multicolored and eye-pleasing aesthetic perceptions by focusing on aspects such as depth in canvas, the effect of space and fullness and transparent shifts. With abstract works each more distinctive than the other and a remarkable method of painting, the exhibition looks to bring a breath of fresh air to Turkish contemporary art and can be seen at Galeri 77's space in Karaköy until March 10.

For more than 150 years, the dispute regarding the role of representation in visual art had parted the world of painting in two groups. On the one side, a large number of artists underlined that freedom and pure originality could only be achieved through a formalist approach to painting. Only then, its psycho-visual impact could be fully released, and art would give up its ancient role of telling stories in order to illustrate matters of the world. Another large group of painters underlined the power of figuration and narration in their oeuvres. They believed in the socio-political dimension of art, where individual stories are merged with political history.

At the end of the 20th century though, abstraction and figuration made peace with each other as the postmodern condition of art exposed that formalism and narration do not necessarily have to be opposites or anti-poles. It even went so far, that both approaches could be mingled, for a more adequate reaction to the multi-layered character of today's highly complex realities. 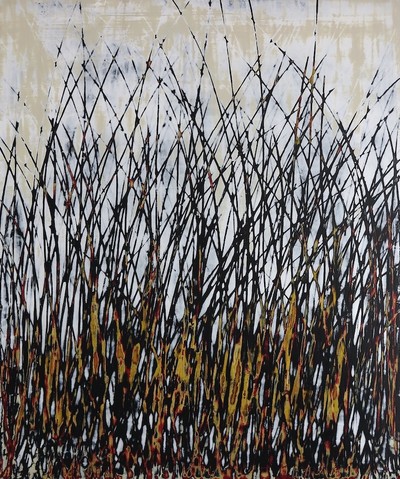 In this context, the work of Mesut Karakış is a good example of an artist who bridges between spheres of nature and abstract art. His formalist approach to painting does not hide its sources in the real world and creates an appealing aesthetic that shifts between representation and abstraction. The pieces show highly dynamic matrixes of lines, thin shapes, complex textures and appealing bride colors. The artist uses mainly warm colors, which he contrasts with black and white in order to support the aesthetic power of his paintings. Like lava streams of a volcano, in Karakış's paintings, red and orange appear frequently in a complex net of swirling stripes and multiple forms. The strong qualities of the colors find a nice counterbalance in the dynamic design of composition. Together, they form abstract images that have deepness and powerful momentum.

Mesut Karakış has developed a sophisticated and individual painting technique, which shifts between construction and destruction. In the process of creation, the artist applies the acrylic paint on the canvas in different layers and thicknesses as per the pre-planned composition and color range. He then, once again in a planned manner erases the paint by dissolving the surface, rubbing sandpaper and reducing it by patinating; thus revealing the layers of color underneath. In this act, shifts of color merge and mingle with each other and create an extraordinary psycho-visual effect. The depth and the textural value seen from far contrasts with the flat, smooth surface of the canvas when seen from a distance of touch, serving not only to creating an effect of illusion on the spectator, but also in stimulating their eyes as well as their minds.

His alternative method of painting, erasing and revealing has not only a visual quality. Indeed, observing various stages of the painting through the exposure of numerous layers of paint is a feast for the eye. Its visual impact is high and appealing. At the same time, the process of creating and destroying, as well as showing and hiding is a fascinating conceptual aspect in his works.

The painting method of Mesut Karakış not only causes a fantastic aesthetic but also discusses the existential being of painting itself. Through his archaeological-like act of digging and revealing, he exposes the nature of painting, and this is the reason why his work positively contributes to the critical regeneration of this ancient field of art.

Mesut Karakış was born in Sakarya, in 1976. He graduated from Marmara University Faculty of Fine Arts Department of Painting, at Hüsamettin Koçan Workshop. He has participated in various group exhibitions since he was a student. He currently works and resides in Istanbul.