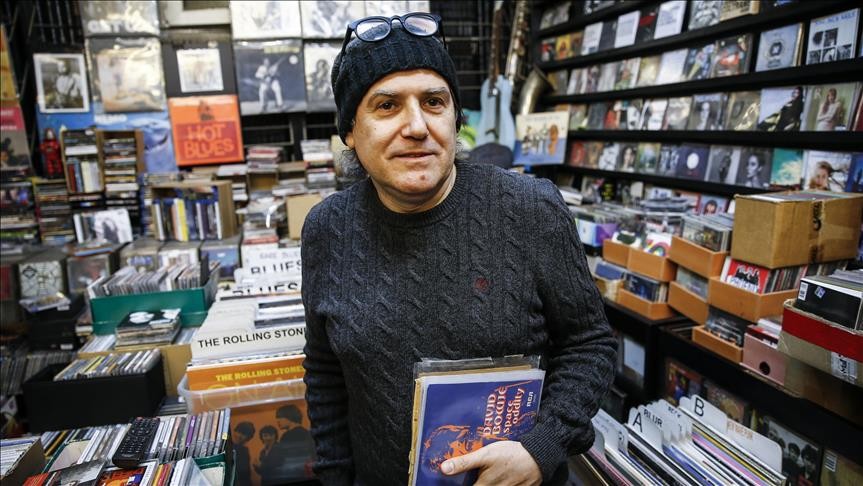 While some young people might say they have never laid eyes on a vinyl music record, many older collectors travel the world in search of rare albums.

According to record sellers in Ankara, Turkey is a treasure trove of hard-to-find 45 and 78 revolutions per minute (rpm) records, also known as LPs, from a range of musical genres.

"Because Turkey, unlike the U.S. and Europe, hasn't produced that many vinyl records, many of those that were made here are considered rare," longtime collector Süleyman Özyıldırım told Anadolu Agency (AA).

Having grown up listening to vinyl records, Özyıldırım now owns and manages "Shades," a shop in Ankara's Çankaya district that sells cassettes, CDs and vinyl LPs, many of which are relatively hard to find.

"Vinyl albums produced after the 1960s are especially coveted by collectors," said Özyıldırım, 55, whose private collection of records numbers more than 50,000.

He explained that during the energy crisis of the 1970s, oil - a primary component of vinyl became harder to obtain. Therefore, many vinyl records pressed in the 1960s and early 1970s were recycled in order to produce new albums.

"Those that survived," he said, "are now considered extremely rare."

Examples of these, according to Özyıldırım, include singles such as Pink Floyd's "Point Me at the Sky" and Johnny Hallyday's "Golden Ring," both of which were produced by record companies in Turkey. He went on to note that rare cover art also contributes to an album's relative worth.

"For example, the album sleeve on the Turkish-made version of David Bowie's 'Space Oddity' was unique," he explained. "It, therefore, commands a high price among collectors."

"The Turkish-made version of the 'Led Zeppelin II' album is also a rarity because it came with a unique album sleeve, which was actually designed by Turkish designer Betül Atlı," Özyıldırım said. He cited a number of other Turkish-produced records, including Queen's "Somebody to Love" and the Sex Pistols' "God Save the Queen," both of which, he said, "are now worth thousands of dollars."

Özyıldırım says vinyl records gradually decreased in popularity during the 1980s with the appearance and eventual ubiquity of the compact disc or CD.

"Bands continued releasing albums on vinyl," he said. "But with the appearance of CDs in the 1980s, they started producing LPs in much more limited numbers."

"Due to their relatively limited print runs, albums from this era are also quite rare," Özyıldırım added. "Records from the 1990s are therefore much more expensive now than when they were first released."

Aside from their value as collectors' items, many people searching for rare vinyl records do so because the medium affords better sound quality better than either digitally-recorded music or more recently produced vinyl LPs. According to Koray Vergili, whose Ankara shop sells both new and vintage LPs, record companies are still cranking out vinyl records, albeit in much more limited numbers.

"But many purists don't like the new generation of vinyl recordings," he said, pointing to Michael Jackson's iconic "Beat It" as an example.

"The remastered versions of the album are still being produced on vinyl," Vergili told AA. "But they don't sound as good as the original 1982 release."

"When you listen to both versions," he added, "you can easily hear the difference in quality." Vergili went on to cite Elvis Presley's first album, released in 1956, as another example. "The same album was later remastered and rereleased on vinyl, in 1960 and 1980," he said. "But there are audible differences in quality between all three, with the original version widely considered the best."

"I searched online about how to find the highest-quality audio recordings," he said. "The aficionados all seem to prefer vinyl and they're right."

Özyıldırım, too, says there is an obvious difference in quality even to the untrained ear between digitally-recorded music and that pressed on vinyl.

"Digital recordings lack something," he said. "With vinyl, you get a much broader sound."

Murat Aras, a 60-year-old retiree and vinyl record collector (and one of Özyıldırım's regular customers), was quick to agree. "There's a qualitative difference between digitally-recorded music and vinyl; the latter yields a much more satisfying experience," said Aras, who has been listening to - and collecting - vinyl records since 1970.

"The only problem with vinyl," he added, "is that the records themselves are more fragile and easily scratched, which results in irreparable damage."

Vergili agreed, stressing that serious collectors of vinyl must "properly maintain" their records. "If you don't treat them gently, they will unlike CDs wear out over time," he said. For many collectors, however, it isn't just better sound quality that drives their preference for vinyl, but the ritual of spinning a record on a phonograph. "It's more physical," Özyıldırım said. "You take the record, clean it, put it on your phonograph, and carefully place the needle on it. And if you want to hear the other side, you have to physically flip it over."

According to Özyıldırım, hardcore collectors will travel anywhere including Turkey and pay almost anything for the rare albums they seek.

For example, he said, a vinyl copy of Prince's disavowed "Black Album" recently fetched more than $20,000. "Just before its planned release in 1987, Prince ordered all copies of the album destroyed more than 500,000 of them," he explained.

"But last year, a woman found a copy among her deceased father's possessions," Özyıldırım added. "It turns out that her father was a music reviewer who had received an advance copy of the album but never opened it." He also pointed to a 2012-album by U.S. rock band the Flaming Lips, which, he said, is particularly hard to find especially in Turkey.

"The artwork on the album's cardboard sleeve was actually made from the blood of the band members," he said. "So, the government banned it here." According to Vergili, rare vinyl recordings of Turkish performers are even more difficult to find than those of their western counterparts. "Turkish-language vinyl records are produced almost exclusively in Turkey and can, therefore, be much harder to obtain," he said.

"What's more, their print-runs are generally much more limited, making them even harder to find - and that much more expensive," Vergili explained.

"For example, you can still buy an Elvis Presley record for about TL 40, but a Zeki Muren vinyl LP can cost you as much as TL 300," he said. Vergili went on to cite Fikret Kızılok's "Zaman Zaman" album as one of the rarest vinyl records by a Turkish performer. "It will cost you TL 2,000 at least," he said. "But this is nothing for a dedicated collector."