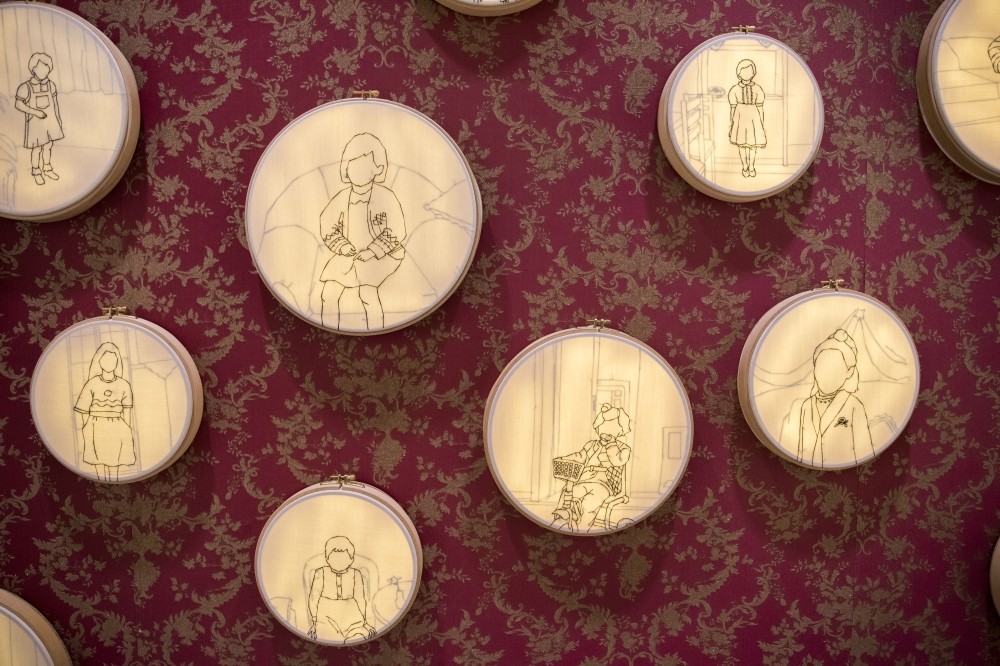 Drawing from family photos, Damla Yalçın has meticulously embroidered the domestic spaces and residential neighborhood of her childhood in Ankara. Inside the Le Meridien Hotel in Etiler, where Krank Gallery recently moved, Yalçın installed ruby red wallpaper with vegetal motifs to backdrop 21 works

To thread a needle through fabric, hooped by a band of wood, is an act charged with metaphors of relationship, both organic and personal, drawing its makers and admirers into the inner worlds of memory and imagination. It is a practice recalling traditional methods honed throughout history to appreciate the value of salable fabrics and textiles by interweaving familiar visual embellishments, enticing would-be buyers with irresistible seductions. Its rich floral harmonies have bedecked the ensembles of both the moneyed and working classes throughout the medieval to the pre-modern eras from London to Tokyo.

In the centuries of Ottoman rule, embroidery was a distinguished craft, and remains an iconic symbol shared by the many ethnicities of its multinational culture. While mostly resurrected for foreign affections, and preserved by an increasingly powerful social milieu who line the streets of Istanbul's old city donned in flamboyant clothing styles once popular in the bygone days of less audiovisual stimulation, embroidery has also assumed new adaptations of form and technique. Its skills have been taken up by the youngest generation of Turkish women, who are using its subtle craft to make social statements, and fine art.

Among them is the hardworking Damla Yalçın, who, in her early 20s, has appeared in multiple group exhibitions throughout the last year. She could be seen, among many places, with the curator Tima Jam in the cellar gallery of Adahan, steadfastly embroidering her next piece while surrounded by a conglomeration of Turkish and Iranian artworks during the Metamorphosis series, in which she showed her works alongside Laleh Memar Ardestani and Melis Buyruk for the late November sequel. She draped a canvas to fill the contours of an interior brick archway, embroidered with the likeness of a shy girl with only the outline of a face.

The trouble with simplicity

Inside the chic lobby of Le Meridien in the upland district of Etiler about midway along the Bosporus on Istanbul's sloping European banks, Krank Art Gallery is exhibiting her nostalgic minimalism. The works are deceptively simple, like a child, who, staring blankly at a stranger, is internally riveted by a kaleidoscope of emotions and thoughts, criticisms and reflections. She uses layering and light to effect a range of perceptions, enlightening her welcome seers with an entrancing invitation to accompany her back to her earliest recollections, at home, napping, playing, dressed for the mere occasion of her adorable presence.

Yalçın has a naive touch, yet is a refined practitioner of reductionist philosophy in the guise of material artistry. In fact, before delving into the exposition of her works, she almost immediately referenced Gaston Bachelard, whose book "The Poetics of Space" inspired her to conceive her self-portrait in the family house of her past and its environs through the silent voice of her chosen medium. His meditation, published in 1957, is an architectural treatise dedicated to lived experience with an advocation to build human places based on the principles of nature, and to understand just how to do that through the metaphysical devices of poetry and literature.

When someone walks through the corporate glass of the hotel lobby and into the poetic space of the compact gallery at Krank, motion sensors flick on soft lights to illuminate the backcloth of her 17 circular-framed works hung up on the sentimental wallpaper. From a safe distance beyond the field of the sensors, her portrait sits and stands alone, like she had embroidered for her piece at Adahan. In the vicinity of the backlighting, furniture, and rooms come into focus. For the sleekly-designed pages of the show's catalog, the publisher used transparent paper to evoke a similar effect. 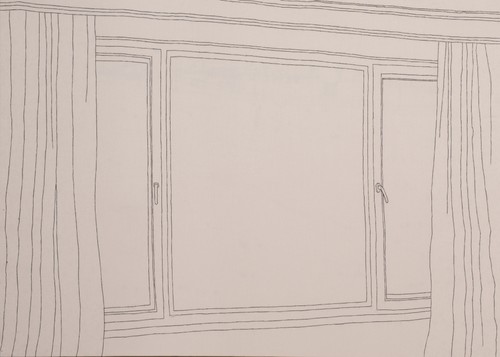 In one of her pieces, she hops onto a cushioned chair in a comfy sitting room encircled by pillows and plants. And raising her arms to keep her balance, she allows the layers of her embroidered day dress to float in the photographic air. Above her belt, the lines of thread depicting the embroidery on her childhood dress mirror a central metaphor in art history. By re-embroidering the embroidery on the clothes she has since outgrown, and also by transforming family photographs into personalized visions of her handiwork, her delicate pictures of lost time come to symbolize an intergenerational break with tradition, from the hobbyist manufacture of domesticity, towards an empowered feminist individualism in the public sphere via the art world.

The rethreading of a woman

Yalçın wanted to connect with her childhood. To create her work, she first drew onto the fabrics directly, tracing photos that represented happy, positive memories, and then embroidered over the lines, which are painstakingly rendered with perfectionist clarity through the anchoring of her black thread. In a way, her holistic reclamation of self is further emphasized by her grounding the over-atomized trends of photography back, literally, into her hands.

She admits that embroidering detailed faces would demand a different order of challenges that she was not prepared to tempt, but by conveying the untainted emptiness of the fabric from chin to forehead the works retain an innocence, while simultaneously provoking an unsettling sense of oblivion for outsiders who, strange to the family and her life, will never be able to sympathize with an emotional expression. Everyone is left to wonder how the girl might feel, always pictured alone. And it is the gift of transpersonal imagination that Yalçın offers, as to read a nighttime fairy tale and be swept away with the utterly private inventions of a half-conscious mind on the edge of dreaming.

Three years ago, Yalçın identified as a feminist painter, affirming her solidarity with other young women in Turkey through her use of colors especially. Afterwards, she saw embroidery as an apt technique to explore such social concerns in her creativity. Her mother had always embroidered on practically everything, and taught her how to do the same. More, the circular frame characteristic to the embroidery craft signified the psychological, human interior for her. For the four outdoor scenes at her show, she employed rectangular frames in contrast.

When she embroiders, she intuits her mother's frame of mind, as she had observed her during the endless hours in the outlying Yenimahalle district of Ankara. Her art practice is a way for her to remember. But she approaches it in the spirit of experimentalism, as a trained draftswoman and former painting student at Marmara University in Istanbul, and at the Academia Sztuk Pieknych in Poland, showing her art in Germany, South Korea and Moldova. Her intention is for people to see her work as a kind of drawing, as she stands firm in her founding identity as a painter. In other words, she is an artist of space, as her lines fill the void with a powerful levity, as to look through the eyes of a child and marvel at the mundane.

A needlepoint of feminism

"When we consider our past relationships, we see that this theme is more about standing side by side, intersecting separate spaces of belongings," said Gözde İlkin, explaining her work, "Inverted Home" during the 15th Istanbul Biennial in 2017. "For this piece, I once again worked with old fabrics I gathered from family members. So it might seem more home-oriented but it actually a complete opposite process of belonging because it reverses the whole information we have about belonging by taking those fabrics and objects reminiscent of homes out of context."

Led by embroiderers like Gözde İlkin and the rising Damla Yalçın, a wave of emerging artists are raising fabrics of needle and thread to the light, as they birth visual proclamations that assert the innate beauty of female and feminine forms. "21st century women's rights movements helped multidisciplinary artists to see what these so-called crafts can offer beyond conventional comprehension to become a voice in the intersectional third wave feminist movement," wrote Gizem Oktay, an aspiring poet and eco-artist inspired by the late textile artist Anni Albers as she embroidered artworks while initiating community engagements with impoverished neighborhoods in Istanbul, as in Nurtepe, from Bomontiada's collaborative Atölye collective.

"I have suffered for being a woman. I read about feminism. I am just a human and woman. I feel my wild side. I feel my ancestors, my woman's pains, my mother, my grandmother. I asked them about this pain. My mother and grandmother made embroidery too, and were also tailors," wrote Belemir Koç, an aspiring artist who dreams of selling her contemporary works of embroidery to move to a house in the mountains. "I want to make embroidery with my postmodern and wild side too. That's new generation art. I started to embroider women into the hoop first. Now, I feel very powerful."