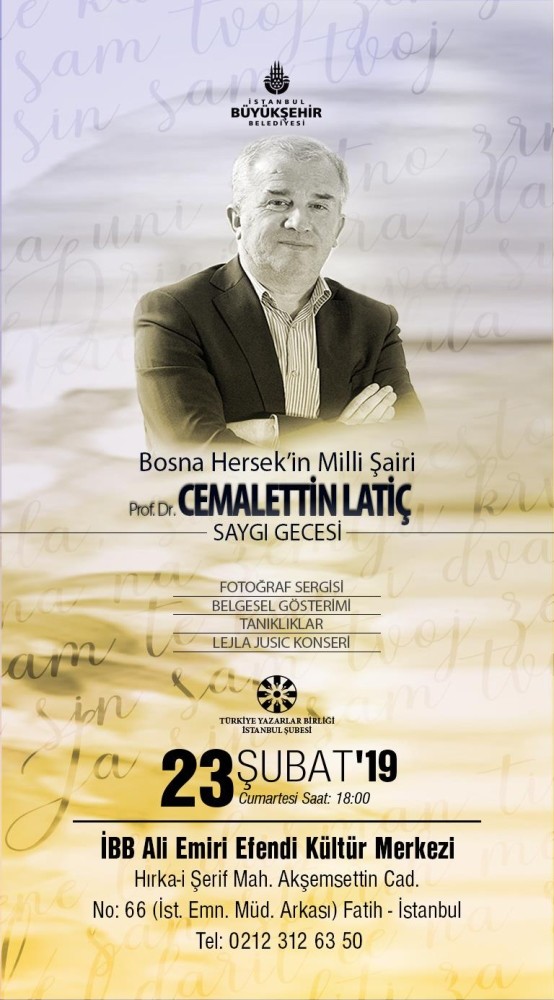 The Istanbul Metropolitan Municipality (IBB) Department of Cultural Affairs and the Writers Union of Turkey (TYB) have organized an homage to professor Cemalettin Latic, one of the leading representatives of Bosnian literature and the writer of the national anthem of Bosnia-Herzegovina. "Homage Night to Cemalettin Latic, the national poet of Bosnia," starts at the Fatih Ali Emiri Cultural Center on Feb. 23, at 06.00 p.m. Opening with a photography exhibition, the program continues with documentary display "Witnessings" and will end with aconcert by famous soprano Leyla Yusiç, a Bosnia-Herzegovina State Artist.

The homage to Cemalettin Latic, one of the closest friends of Aliya İzzetbegoviç and the national poet of Bosnia and Herzegovina, consists of four sections. The program will start with a photography exhibition presenting sections from professor Cemalettin Latic's life at 06.00 p.m. After the exhibition, a documentary on the life of Latic will be shown.

The third section of the program is "Witnessings" in which poets who know Latic very well will share their memories and thoughts on his personality and literary identity. The homage will end with a concert by Soprano Leyla Yusiç, one of the very special voices of Bosnia and Herzegovina. In the concert, Yusiç will perform poems composed by Latic in addition to some Turkish Music.

Latic is now in Turkish

Contributing to Bosnian Alhamiyado literature, which is similar to Turkish Divan literature with its hymn and ode forms, Latic's works began being translated into Turkish in February 2018. The very first books by Latic for Turkish readers are "Gel En Sevgili" (a form of address generally used for saluting Prophet Muhammad. Literally: Come! The best beloved one), "Gazi Hüsrev Bey" and "Çarın Gözleri" ("Eyes of the Tsar").

Born in Bosnia and Herzegovina in 1957, Latic was educated in Islamic studies, world literature and philosophy and received a madrasah education. He spent three years in prison with Aliya İzzetbegoviç, the former president of Bosnia-Herzegovina, took on great tasks during the Bosnian war of independence and wrote Bosnian-Herzegovina's national anthem. Latic, who serves as a tafsir (Quran interpretation) professor and chairman of the Ikbal Platform, is called the Bosnian Yunus Emre. Latic was granted the International Istanbulensis Poetry Festival's Award in 2016 and International Necip Fazıl Kısakürek Award for Literature and Research in 2017.