The human perfectionist: Murat Morova has his Cosmic Latte 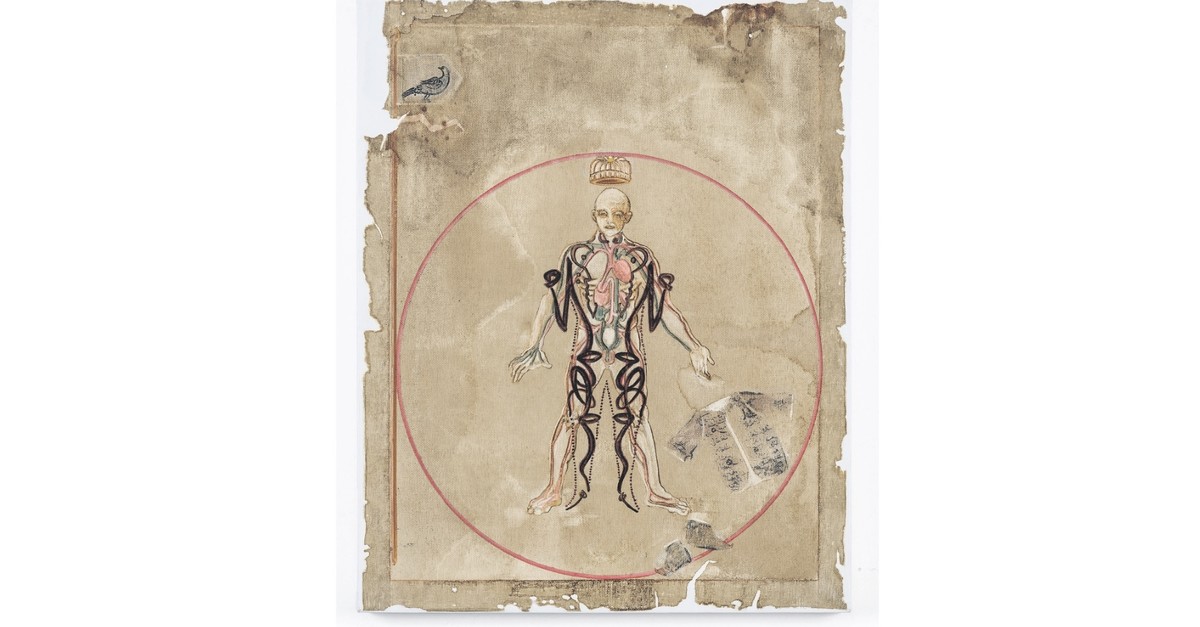 Born in 1954, Murat Morova is unique among his generation of Turkish artists. He conveys the mysticism of Islam with a secular gaze through contemporary art. To visualize the Sufi concept of holistic, transpersonal identity, he painted the average color of the universe, setting the mood for human perfection

The traditional forms of the Islamic religion do not often flower into fully embraceable visions of universality, as its aniconic culture is disinclined to naturalist depiction, too often perplexing foreigners by its mystic obscurities, its dense geometries of abstraction. And its ruling tastemakers throughout history have prohibited the representation of any approximation of divinity. Its faithful philosophers have always emphasized the limits of reason, to place a sharp accent on the absolute inability of human beings, as with any materiality, to express the truly sacred, spirituality of existence, as a part may not presume its whole.

Through the integrated wisdom of anatomical calligraphy, and the time-worn techniques of the illuminated manuscript as a vessel of eternal knowledge, Murat Morova relays the Abrahamic claim to direct relationship with the ultimate source of reality, and with ample consciousness of its superhuman power. He transforms the symbols of prophetic enlightenment with a subtle, yet firm grasp of the human soul, steeped in the sandstorm wilderness of the Arabic language, to fill the unscripted vowels of its charm with a personal voice, releasing howls of unrequited love, as in the allegorical, 7th century Bedouin fable of Leyla and Majnun.

Intoxicated by the abundant aromas of his wild bouquet of intellectual stimuli, spanning the cinematic, literary and musical imagination of cultural history since the dawn of recorded time, he relishes in the fantastical preoccupations of the 21st century, a high Renaissance man of the information age, alone with his blank slates of fresh starts, voracious for the breadth of the world and the finest treasures of humanity and nature, all within the instantaneous reach of his fingertip smudged against the glass of a touchscreen, or by the virtual entry of a key into the unfolding, infinite saga of computerized interpersonal communication.

Like a genuine Romantic of the 19th century European city incarnate in the body of a living Turkish artist, Morova dreams up his visual vocabulary, his distinct signature, under cascades of visionary, imagistic language to traverse his polymathic interests, from Sumerian mythology to medieval psychology, pre-modern cartography, and on down a byzantine cacophony of evolutionary inventions refashioned anew into his latest series of paintings. "Cosmic Latte" demands a leap of secular faith, of belief in the perceivable, as by seekers in search of novel and cathartic neuroesthetic experience.

From the cosmic to the sacred

In the spare, block hall of Galeri Nev Istanbul, wanderers with peeled eyes become confident seers with every eggshell-breaking footstep into the library hush of the fourth floor inside Mısır Apartment. Once blinded, deafened and muted by the globalized disillusionments of Istiklal Avenue's historic, philhellenic promenade, the uninitiated are doused in a baptism of symbols, consummated by the immediacy of sight.

The veil of the arcane is lifted by the exquisite gift of Morova, who details the transcendental rite of passage from the human form to the omnipotent presence, an impersonal voyage characterized by ego dissolution, which awaits the patient, good and optimistic travelers on the Sufi path. A pilgrimage of historians and lovers, convinced of the sublime beauty of art, are then compelled further into the heart of creation.

The nonlinear waterwheel of 19 cyclically curated paintings at Cosmic Latte have no beginning, and no end. As models of the various states of the human form, his work is akin to what the artist Alex Grey conceived for his "sacred mirrors" series, which he originally showed for the masses in a self-styled theosophical chapel in downtown New York City to reflect the material, psychological and spiritual orders of being through 21 life-size, full-body portraits.

When the public is subject to transparent visions and silent harmonies that suspend the elusive joy of realizing the great mystery of life, they are changed, and are able to stand strong and fast, grounded against weakness and destruction, armed with meaning, happiness, beauty and creation. People open up from within and are moved by the principle of perfection when absorbing potent art that guides them with a gentle hand.

Observant and willing, the courageous stumble and feel through the unlit, pathless way that leads to the atonement of matter and energy, toward a fusion of physicality, bound to separation, with the pure freedom of experimental chaos, to embody the essence and holism of selfhood, at one, complete, perfect. When opposites are united, even by the seemingly artificial channel of visual metaphor, or through a spiritual craft, the amalgamation of the contrast is as reverent as it is metaphysical, similar to how masculine and feminine bodies produce an androgynous embryo.

Morova frequently depicts the final polarity between life and death, resurrecting an attention to the botanical details of flowers that recalls the bygone aesthetics of Islam's golden ages of learning, when scientific process integrated a mystical affirmation of the natural world, when the planet was understood as a hidden trove of philosophical truths. His eye for color and its absence is especially vivid in his vegetal stills. Violet and coral petals grow from a pot of skeletons. A circular frame has a calligraphic body with a haloed skull pointing upward with a red rose and downward with a dead flower the color of the yellowed backdrop. 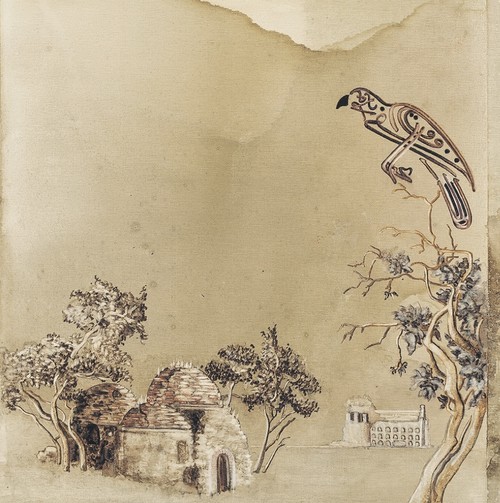 Another is a diptych of post-Romantic landscapes that reflect the geographical dichotomy of east and west. The calligraphic human form dances throughout with the muscular heroism of a demigod, like an unfettered spiritual being, extra-dimensional against the un-peopled environment, lost to history while also maintaining an otherworldly design reminiscent of the film, "Melancholia" by Lars von Trier. Its contrasts balance the Italian and Turkish countryside with stone structures retaining oriental and neoclassical features.

Morova works like an alchemist of the contemporary, filling whatever gaps continue to divide the omnipresent phenomena of opposition in all fields of knowledge. From the religious to the naturalist, his art asserts that the universe is greater than the sum of its parts. He activates the opaque emptiness of its invisible space with the enchanting light of the "cosmic latte" shade that astronomers from John Hopkins University found to be the color of the universe in 2001 after researching the spectrums of some 200,000 galaxies.

The methodical madness of Morova

Up through the stale, chalky air of a pale, concrete stairwell, Galeri Nev Istanbul welcomes with a sleek aura, imbued with the paranormal atmosphere that exudes from the paintings of Morova, held up inside the inner chamber like the holiest of the holies in one of Istanbul's proudest residential complexes, Mısır Apartment, named by an Ottoman khedive of Egypt whose 1910 commission signified the twilight of imperial glory, its facade exemplifying the ornate decor of an architectural triumph unsurpassed along the storied pedestrian thoroughfare.

The works appear as out of time, like a fictive Borgesian codex transmitted from another dimension, as in the internationalist Argentine's story, "The Book of Sand." The antiquated visage of his paintings evoke the illustrated leaves of an ancient manuscript, vitalized with contemporary immediacy. Each painting pulses with his impassioned attempts to assimilate the Sufi understanding of "insan-ı kâmil," from the Turkish for the perfect human, into approachable art visible to Western eyes. To express the internalization of totality, he expanded the notion of personal space, and growth, to intergalactic proportions, bridging cosmic divergences and cultural paradigms.

To attain perfection as a human being, Sufi teachings demand transcendence of the worldly realms, of clothing, the body, culture, Earth, even the mind. Morova mirrored traditional thought with the increasingly dispersed human form. With the outline of the body as a symbol, mere language turns it into a figment as sheer as see-through silk, and as fragile, with its aspects labeled in Arabic terms for self-knowledge. Every last strand of familiarity is shed for undivided, spatial independence from any source, center, or origin point, from any sense of self.

His brushstrokes evidence the rhythms and techniques of an honest and humble working man as the ideal ascetic. Bent over delicate, stained canvases, he is not afraid to impress its surface with the points of his lifelong vocation, to merge his individual art practice with the inborn will to human perfection. Years of hours pass, and, weightless, he falls, trusting the universe, free in his abiding meditation through art.