Art and refreshment in the heart of Istanbul 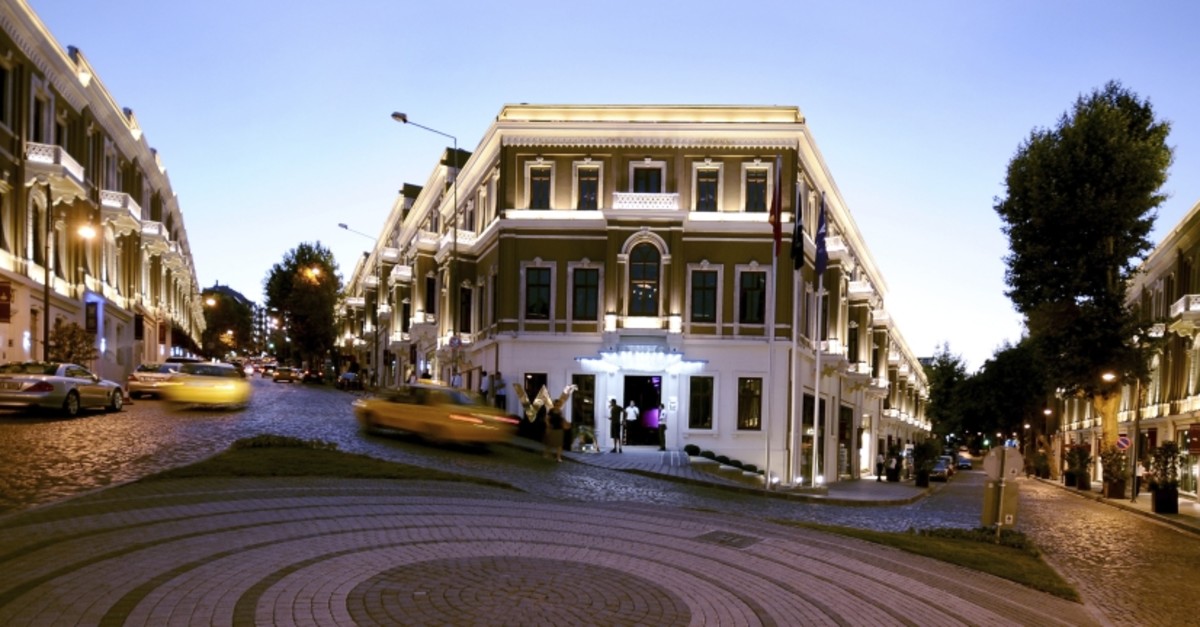 The Akaretler Street is currently hosting the Artweeks event with shows at various buildings.
by Zeynep Esra İstanbullu Mar 06, 2019 12:14 am

Located on the fanciest street of Beşiktaş, Artweeks@Akaretler brings together a large community of art lovers, collectors and artists in a number of buildings on Akaretler Street, where visitors can also enjoy food and drinks

Organized for the first time last September, Artweeks@Akaretler drew great attention and aims to bring together more works and collections with a different, dynamic and extraordinary perspective in the new art season. The event hosts artist-collector meetings, workshops, art conversations and exhibition tours.

Daily Sabah conducted an interview with Sabiha Kurtulmuş, the organizer of the event, who is a gallery owner herself, about the event and her journey in the art circle.

The first Artweeks@Akaretler was organized in September 2018. Having started on Monday, this is the second edition of Artweeks, which is set to run until March 17. Kurtulmuş told the story of how the idea came into being. 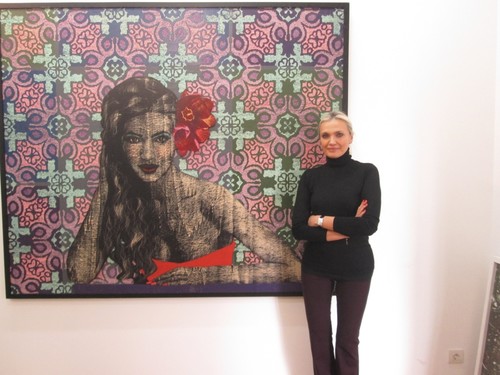 Sabiha Kurtulmuş poses beside a work by Arzu Akgün at Merkur Gallery.

"I'm an art dealer and a gallerist. While thinking of ways to connect collectors and serve to the popularization of art with our friends in Bodrum, we decided to organize an art weekend. We held workshops and talks for a weekend. Beforehand, I had organized four art-talk series. The participation was quite satisfying. The participants mostly consisted of collectors. I tried to offer spaces where people cozily talk art and share their experiences on art. The aim was to increase the interest for art. We proposed to Turkish businessman Serdar Bilgili to organize the project at his hotel in Bodrum. However, he suggested holding the organization in Istanbul saying that Akaretler Street is vacant and suitable," he said.

"The venues are fantastic with their high ceilings and historical structures. We completed preparations in a month. Getting organized was not a problem for my close friends who are artists and collectors. Although our first event overlapped with the fair of Contemporary Istanbul, it attracted a great deal of attention. We accepted over 10,000 visitors. Also we, representing our galleries Merkur, which is mine, Artsümer and Arya Gallery, exhibited our pieces. With the exhibitions, we also attracted collectors who don't visit galleries much," he continued.

The second run in the event

Artweeks@Akaretler is not bound on a set schedule. "We don't follow a specific schedule or plan. It was an advantage for us to come across vacant venues. Six months after the first organization, we attempted to hold the event again. However, we didn't make any plan on how often to organize Artweeks. There weren't artwork sale options at the first Artweeks. This time, visitors can purchase the works exhibited as part of the organization. We are offering this option so that the artists will also be supported. This is a means of living for them. This time, we, as Merkur, won't attend the event under the name of the gallery as I'm also the organizer of the event. Besides, independent artists who don't work with any galleries and most of which are my old friends will attend the event. The exhibition will be realized at six venues. Anyone who visits Akaretler Street can visit the entire exhibition by following the specified buildings step-by-step. The buildings are decorated so that visitors can easily detect them. There, gallerists, collectors and artists have the chance of coming together. Also the street is suitable for socializing. There are so many different dining locations on it. People can both visit the exhibition and hang out at the cafes. This is a delightful art activity rather than being exhausting and restrictive," Kurtulmuş explained.

There is not a restriction for any specific theme or discipline in the event. "We accept works produced in various disciplines such as painting, sculpture, video and installation. What's more, I have to say that women artists are in majority. I appreciate the representation of women artists. As a woman gallerist, I'm up for positive discrimination. This is a global approach after all. Art faced male domination for years but it has changed in the recent period. For now, women are so powerful in art world.

In addition to the exhibitions, Artweeks@Akaretler offers daily talk series. Sabiha Kurtulmuş gave brief information about the series: "We talk about some difficulties we

faced on such a sliding and inconstant market. We face problems of communication and survival. Our aim is to develop solutions on how to overcome some specific obstacles and how to change the situations. As it will be useless to think on its own on such issues, we want to come together and exchange opinions. We invite collectors to such talks on purpose. Hence, talks turn into interactive conversations full of the art journey and the difficulties the artists face throughout that path. This way, we work to heat the market up. I organized such an organization as I think that art circles need it in addition to my personal needs as a gallerist. I think that it will make a great contribution to the revival of culture and arts and promotion of Turkey. The dynamism in art life will also contribute to Turkey in addition to tourism."

Merkur Gallery is a kind of one which mostly presents works by young artists. "In 2010, I founded it with an aim to support and cooperate with the young. It is very exciting for me to explore young artists. What's more, it is a part of our work to look for new figures. When old artists leave galleries, young artists step into their shoes. You have to keep up with the pace. That's why it is difficult and dynamic to be a gallerist. I always wished to be an artist rather than a gallerist. All the risk is undertaken by gallerists. No matter how art critics approach works from the perspective of the artist, gallerists make great efforts behind the scenes. Some galleries close down as they cannot defray the expanses. In addition, there is a false notion that gallerists work with quite high commission. In fact, we make discounts often. When we could sell a work with high-commission, we make investment for a future project. This is an investment market in a way. On the other hand, I want to work as a gallerist till the end of my life. As a gallerist, one is in an absolute contact with creative people, in a constant state of exploration. There is not a bigger kind of richness than getting to know people from all around the world."

Art commissioning as a career

"I started my art career as a self-educated art assistant. I was not educated in the area I mean. I developed so many art projects. I'm a project person. Maybe, this is the explanation of why I'm busy with projects now. I have been in the sector for 25 years. I also serve as an art consultant. I make artistic support at the architecture phase of hotels and institutions. When a good architecture project meets good art, we get beautiful results. Sometimes, projects conducted with a high budget may seem deficient and infertile. As a gallery, we also intermediate for the art orders of architecture projects. Working custom-made is an old tradition in art. In the past, the artists had mentors and they made custom-made pieces for the palaces. Also today's artists do that, however they do that without sacrificing their own style. That constrains the artist at first, however it makes them visible. Let's call it developing space-based solutions."

It is a matter of curiosity for art lovers how artists contact the galleries. "In fact, young artists don't know how to connect with galleries or present a portfolio sometimes. Instinctively, they want to explore the world like a shot. However, art takes years. It is a quite difficult one as a choice. You cannot have a regular income as an artist. Art is a kind of lifestyle and you have to accept living like that to be an artist. It is not a sustainable one as a profession," Kurtulmuş highlighted. 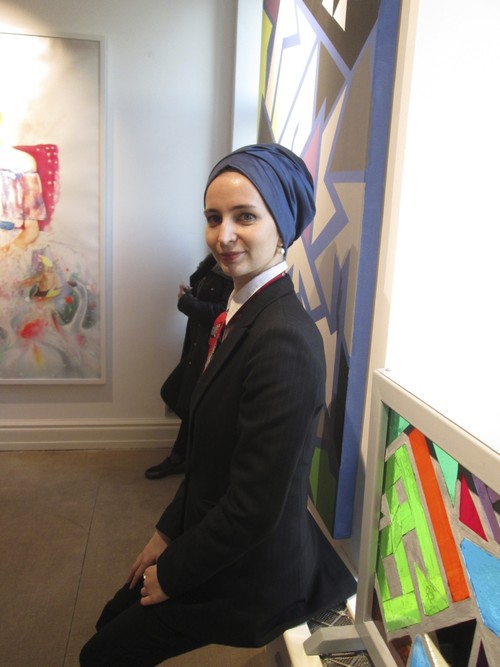 As a rising young talent in the art scene, Zeynep Çilek is also exhibiting two works as part of the event. One of them is an acrylic painting on canvas, while the other is stained glass, characterized by the use of vivid, neon colors, which disseminates the sunlight. Çilek participated in the previous Artweeks event with her abstract geometry works. "I usually redefine traditional motifs with contemporary materials. There is Rumi in my works here. I reinterpreted the pattern of 'eli belinde' ['arms-akimbo'] in Anatolian rugs. ıt is the symbol of femininity. Not only it refers to motherhood and fertility, but also good luck, wealth, happiness and joy. I'm trying to build bridges between tradition and the future. I use contemporary techniques. Unlike traditional tones, I use neon colors. That is my comment. These works are being exhibited here for the first time. Although the first Artsweek coincided with the Contemporary Istanbul fair, it attracted a lot of attention. Such events are very important for artists like me. They are like a stage for us. We have a chance to contact more collectors thanks to them. Young people are more interested now. While some of them are interested in sharing artwork on social media, others are really into art. However, it is clear that such activities increase our visibility very much," she said.