A voice in color: The portraiture of Semiha Berksoy 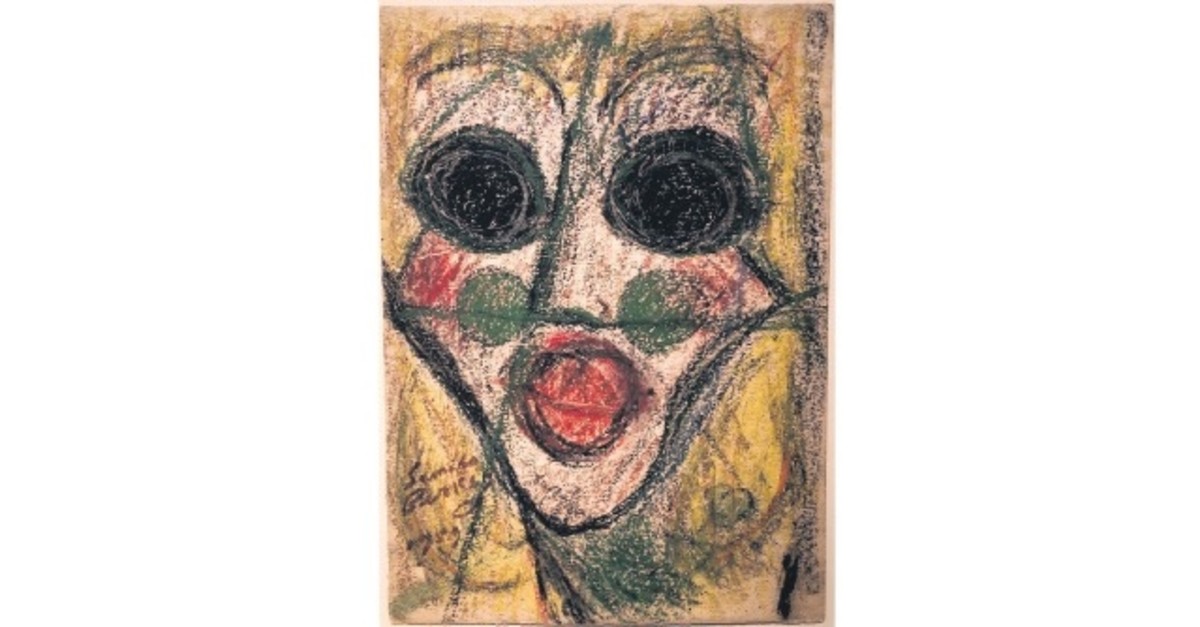 28 portraits by Turkey's beloved, postwar belle Semiha Berksoy, are on display at Galerist until March 23. Born in Istanbul as the daughter of a painter and a poet in 1910, Berksoy was raised in a multilingual, musical family and grew into an opera singer, actress, poet and playwright whose naive art immortalizes her place on the world stage

In 1918, Semiha Berksoy was 8 years old when her mother, the painter Fatma Saime, passed away, a victim of the Spanish Flu. The late Ottoman woman wears an emerald green top in the roughly sketched pastel that hangs within a spectrum of portraits at Galerist, spotlighting how Semiha Berksoy transfigured her loved ones. Swathed in a rapid of cobalt with rivulets of etchings into paper, the imaginary portrait is staggering for its sharpness. The eye of her mother is tightened with a viridescent incision, her nose and lips streaked with verdant hues.Surrounding her mother, poised with dash and class, the textural wash of marine blue recalls the aquatic landscape around the shorefront mansions of Çengelköy where the artist staged her first dramas as a precocious girl ripe for the stage. Along its sloping districts on the Anatolian side of the Bosporus, locals still savor yogurt drinks and strong tea on balmy days under ancient plane trees.

She would rush home after primary school with her latest illustrated poems to show her mother who believed in the spirituality of art. Her mother embroidered and tailored haute couture beside painting. She taught Semiha to sing. When practicing Mozart at home in the Moralı Mehmet Bey mansion, she demonstrated how dancing accompanies singing.

Three years before the death of her mother, her father the poet Ziya Cenap balanced his fez on his head and his daughter in his arms as his wife stood beside him for a photo. She was wrapped from head to toe in a black shawl, worlds different from the bejeweled, secular woman ready for an aristocratic party as in her portrait, "My Mother The Painter Fatma Saime" (1966). At 16, already a performer at Kuşdili Theatre in Kadıköy, her room became a studio where she made watercolor portraits.

"Maybe losing her mother meant being even more liberated, because when you don't have a parental figure, like a mother, you try to bring her back in your memory, and imagination and this can bring out much more," said Senem Özgören, the artist liaison at Galerist, who sees Berksoy as one of the greatest examples of contemporary Turkish art.

The face of memory

The posthumous retrospective of portraits at Galerist remains authentic to the naive, childlike soul of Berksoy the visual artist. Her transcendent hand sketched and painted on both sides of whatever surface she could find. She would douse and refashion her room, furniture, carpets and herself in extravagant, lavish extensions of her palette, her uncanny grasp of form. For her show at the 2005 Venice Biennial, curator Rosa Martinez transplanted her entire bedroom, as Berksoy had transformed it into one seamless work of art.

Despite her prestige, her mixed materials could very well be salvaged from under the bed of any curious teen. Eccentric to a tee, she even used cardboard. With spontaneous affinities to Art Brut, she intuited the abstract expressionism that would galvanize European art as the postwar boom stirred American and global artists to the fore of an aesthetic revolution that continues to advance. With time, she stands firmer on the front line, as her works grace the limelight of exhibitions around the world, from her recent show at Frieze Masters, London to the upcoming Sharjah Biennial, where her larger-scale, double-sided works will appear. 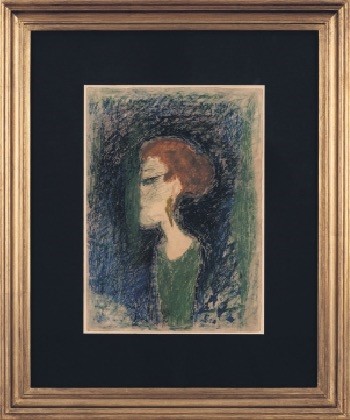 "For years we were against the selling of her art, including myself because we wanted to open a museum. The museum project still exists, as there are so many things left of her, many memorabilia, paintings, drawings, personal belongings that document the early republic period, its music and theater history," wrote her daughter, Zeliha Berksoy, also a public figure in Turkey as a prominent actress and opera singer.

Semiha Berksoy earned distinction onstage after appearing in the first Turkish opera in music history, "Özsoy." After the premier on June 19, 1934, Ataturk invited the artists to enjoy an evening together in the center of Ankara. They played billiards and reveled till dawn. He asked her to sing. As a high-dramatic soprano, she made an impression. He encouraged her formal training in Berlin. She later led the 1939 production of "Ariadne auf Naxos" at the Berlin Academy.

The Hitler Youth protested against a Turkish woman leading such a grand performance in Nazi Germany. The conductor, tasked to celebrate the 75th birthday of Richard Strauss, defended her as the best artist for the role. Titled after the opera, the cloth she painted with oil in 1998 is now strung up in a moodily lit space of its own, evoking her mythical stage presence. While her artworks reach the apex of the global art world, early recordings of her singing are only rarely found on vintage vinyls buried and scattered in the dusty used bookshops of Istanbul.

"She saw herself as Ariadne of Ariadne auf Naxos. That painting on cloth shows her in the age she played Ariadne in Berlin. Of course she would mention her experience of Germany of the period: Turkey was rather powerful in 1938-39," wrote Zeliha Berksoy. "Semiha's life was formed as what we may call gesamtkunstwerk. Her career in opera, theater and drama, and her artistic creations all accompanied one another. They were equally important mediums for her artistic outlet. When art was the subject, to medium or form was secondary to her. She was all three of them."

A play of masks

Traveling between Istanbul and Berlin as an opera singer, she penned a surrealist play, "The Letter from the Grave." It was an adaptation of her five-year love affair with Nazım Hikmet, the poet laureate of Turkish literature, but it was only produced underground. His imprisonment wrenched her heart, and compelled her to write volumes of letters, some of which are published. Although there are no portraits of Hikmet at Galerist, she depicted him in her paintings with an almost obsessive frequency likened to her keeping his personal effects, such as his bow tie, quoting his features in about one out of every thirty of her paintings.

Around 1972, she retired from the opera after a lifetime onstage, which often stifled, and focused more on painting. Nazım went to jail, and she performed in Ankara theater. Her debut as a visual artist was in 1965 at the Ministry of Culture in Paris. It was an exclusive, non-commercial show. "Ariadne auf Naxos" is displayed closest to the Galerist entrance. It is not the first time her sheet drawings are appearing at Galerist, though it is the only figurative piece of its kind at Portraits. As with the American art prodigy Jean-Michel Basquiat, the paintings of Berksoy are at times scrawled with arcane texts, that, like her play, have a hallucinatory style.

Her distance from mainstream Turkish culture is apparent immediately at Portraits, as the entrance hallway is furnished with her piece, "Crying (Self-Portrait)". Painted when the artist was 86 years old, it is also indicative of her place in the prevailing cultural milieu in Turkey, while the names of her fellow creatives fade from relevance in the national arts canon.

Even her portraits of better-known figures are generally lost to the public imagination. Muhsin Ertuğrul, an actor and director for the stage and cinema also mentored Berksoy, and Ekrem Reşit Rey, brother of the famous composer Cemal Reşit Rey, wrote books and was among a circle of intellectuals so highbrow that a joke went around saying his cat spoke French. But with a communistic bent sympathetic to Hikmet, she did not merely paint, or host, artists, writers, philosophers and historians. She studied the facial expressions of her sister Fatima with a minimalist intensity, honing in on the spark in her eyes, as she did with everyone.

The ultimate curation of Portraits is a pastel self-portrait from 1959. The artist assimilated the features of her contemporaries, young and old, chronicling a culture on the rise, as its golden age culminated with the promise that the path they forged for future generations of artists in Turkey would not be in vain. The thick, black circles around her eyes contrast with the sweetness of her cherry red lips. Behind her ageless visage of ash and fire, she is a weary prophetess who sees the future of her country, and her figurative vision is hardened by its unsightly reality.

"When I decided to become an actress, she did not teach me. Rather than providing me with her experience, she wanted me to learn for myself, which in the end made me stronger," wrote Zeliha Berksoy, with respect for her mother who suffered as a Turkish woman in the arts. "I would always tell her not to portray me funny like others but to portray me properly in a classical manner. She brings forth the personality of her subject."