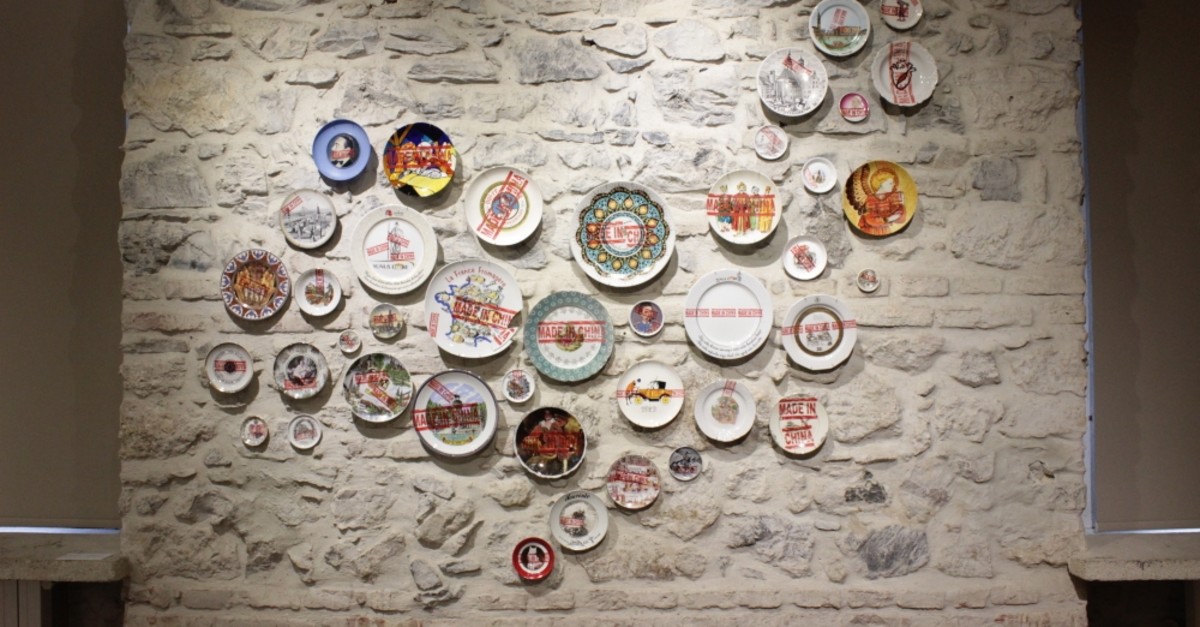 Until the end of March, The Circle will host an exhibition titled ‘Chinatown,' which features Aslı Aydemir's works that contribute to discussions on the new horizons of ceramics

Located on street ornamented with old buildings in Beyoğlu, The Circle is currently hosting the impressive "Chinatown" exhibition by ceramic artist Aslı Aydemir. Although her main field of work is ceramics, visitors will see multidisciplinary works that blend cement, epoxy and bronze in a striking combination.

Aslı Aydemir is a successful artist who tries new possibilities out of the better-known traditional patterns. She is in search of new aesthetic and cultural possibilities with an eye to political critics. She draws on the accidental and flexible qualities of ceramics, creates new meanings through her interventions on ready-made objects.

There several series and works displayed as part of the exhibition that are all centered around a specific theme.

When you enter the square hall, walls of which are decorated with the astounding works of Aydemir, the series titled "Re-Respect" welcomes you. Those who grew up in Turkey of the 1980s and 1990s would remember the white-and-blue tiny figurines that imitate a Victorian look in a clumsy way. They were so ugly and so popular that they become an unpleasant nostalgia in today's adults' minds. The artist has intervened in these "non-respectable" and almost "kitsch" ceramic dolls with materials such as copper and epoxy, in an attempt to retain them in the collective memory. In this prospect, the artist makes a restoration of honor to those figurines. 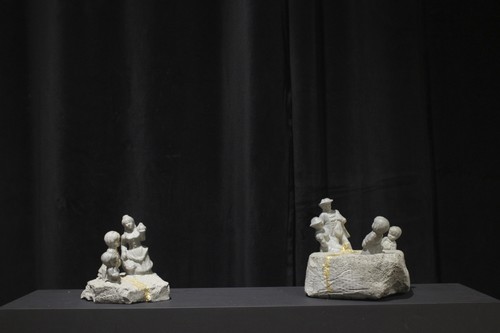 Aydemir explained how she found them and reinterpreted them. "I found these figurines from flea markets and antique dealers and junk dealers. They are cheap replicas once found in middle-class houses in my childhood. Though not bearing material value, they were untouchable, displayed in buffets at homes. They were precious to our grandmothers and aunts as they served to compensate the lack of valuable art pieces at households. The figurines disappeared in time as many other accessible art pieces were available in markets. I now reproduce them in my interpretation for them to be remembered and regain their presence. I tried modern art practices on them in an ironical way. A part of these series consists of figurines locked in cylindrical epoxy forms, in an attempt to capture them in time. I have remade some of them in bronze material, after making molds out of them. As bronze is one of the most valuable sculpture materials, it makes a meaningful reference to my idea of restoration of honor."

When it comes to why the figurine frenzy did not survive the millennium, the artist refers to the widespread use of the internet. "The bar of visual satisfaction and taste rose due to the internet, plus multiple channels on Turkish TV, with the ending of the one-channel period. People found the opportunity to watch more diversified objects and their tastes become more refined," Aydemir noted.

IN THE NAME OF PEACE

Just beside the "Re-Respect" series, a single yet equally impressive work salutes you. Titled "In the Name of Peace," the piece features guns embedded in cement, dealing with another fatal problem in the world: Militarism and arms.

As part of a series the artist has been involved with since 2013, the work has been inspired by the frequently-imposed term "disarmament." "I am the child of an eccentric generation. I witnessed the demolition of the Berlin Wall, as well as the collapse of Yugoslavia and the Soviets. The map I was thought as a child does not exist now. I was inevitable affected by those conflicts and I heard the word 'disarmament' so much that it started to become funny, because what matters is not producing arms at all. So, I decided to bury them in the cement in the name of peace. This is what the series is named after. The reason why I preferred to imprint stardust on them is that wars are raged for gold, oil and money," Aydemir explained. 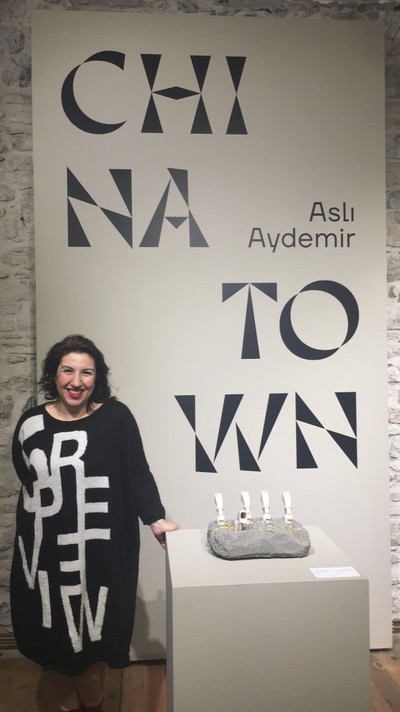 Aslı Aydemir talked about the art of ceramic and her personal journey.

The most eye-catching installation is the one equipped with colorful plates of various sizes, with "Made-in-China" stamped on them. The artist does that on old, found plates, thus calling the viewer to ponder upon the problems of serial production. She criticizes uniform production model that eradicate handmade patterns and local cultures.

"Once I wanted to collect plates from all over the world. Plates that feature the local culture and motifs of various countries. What I wanted to find was the ordinary white plates that were not souvenir pieces. However, I ended up with only three authentic pieces. Whenever you travel, you always end up finding plates with a 'Made-in-China' stamp on them. So, I started to collect plates and stamp them this way. I was angry that I could not find original china. Here I present the irony of de-culturation. I want to be able find British porcelain, for instance, which bears the soul of British culture, produced by craftsman raised in that culture." 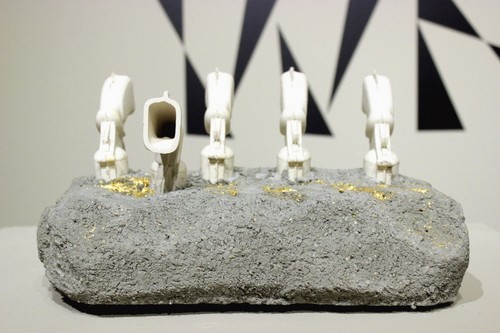 Aydemir collected the souvenir plates from junk dealers. "Some of them are authentic while others are replicas. In the future, every plate you will buy will be carrying the stamp 'Made-in-China.' 'Bladerunner,' made in the early 80s, portrayed the Chinese seizing the trade and business world. It apparently had an amazing futuristic forecast."

FROM CENTRAL ASIA TO OTTOMANS

A brave attempt to shatter the sacredness of a motif, attributed to Ottoman culture, Aydemir created the "After a Few Tries" series, which produces variations on the traditional "çintemani" motif and thus reinterprets the traditional medium to produce contemporary connotations.

"I technically played a game in this series. We encounter a mess of motifs, inherited from the Ottoman times. One of them is the tulip motif, another is the clove and yet another is the çintemani. It literally means Chinese dots. It has existed in China since before Christ. Emperor Timur also used the motif, which was transferred from the Central Asia. Originating from Buddhism, the motif symbolizes power and wealth. Ottomans used it embroidered on the undergarments of the Sultan's sons. My interpretation here is completely technical. I wrote on them technical information like how many degrees they were cooked in. Some pieces' forms have been spoiled, and I display them as they are. Next to the series stands another intervention to çintemani motif, named 'Lets Throw a Dice.' It brings together traditional motifs and a modern sense of playfulness and creativity.

"The dice on the ground are made of ceramic refractors that became useless after my students' tries. The five refractors bear tissue deformations. I preferred them to show my sovereignty over my art. They seem to reflect the phases of thrown dices. They get more and more deformed in every phase. It was like a play for me. Sometimes I create such fun stuff to meditate myself. Art meditates me."

Aslı Aydemir finds ceramic a practical material that gives her the space to try new possibilities, namely freedom. "It makes me feel free. Although it is a powerful material that has its own characteristics, which also creates a challenge for the artist. You can fight with it as much as you want. It depends on how brave you are."

She graduated from Mimar Sinan Fine Arts University with a second degree after her French Literature education at Istanbul University, Aydemir highlights ceramic was a conscious choice for her. "It was my first choice as it was a plastic material with which I could work both industrially and artistically. Plus, I worked as a trainer at the ceramic workshop at Boğaziçi University."

Getting her inspiration from her observations and surrounding issues, Aydemir thinks politics is an essential part of her art and personality as a women. "I worked on the issue of femicide in my last show before this. I am the result of positive and negative tides in the region. I can express my ideas for certain incidents through my art. I make art to stay sane. The women issue, peace and religion are main themes that inspire me. There is a psychological wearing process while creating art. But it is also my meditation as I get rid of my inner pains through art," she concluded.

The exhibition will be open to visitors until March 31 at The Circle.