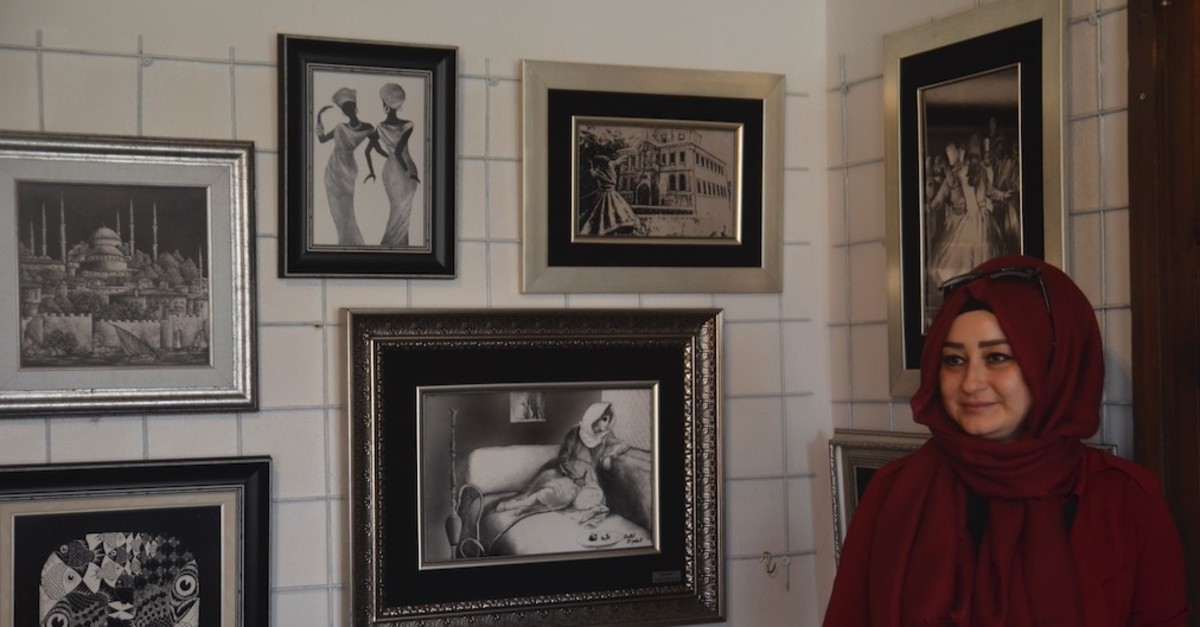 Artist Betu00fcl Erpolat standing beside the paintings she made with sgrafitto technique.
by Anadolu Agency Mar 21, 2019 12:01 am

Artist Betül Erpolat from Kütahya province has been keeping the traditional handicraft of the sgraffito technique alive. The technique was described as "digging wells with a needle" during the Seljuk period. Erpolat, 42, heard of the sgraffito technique, which is known as the art of painting-shaping ceramics, tiles or granite by scratching them with a needle after glazing and covering them with ceramic paints, at Dumlupınar University Ceramics Department where she studied. She has been creating paintings with this technique for nearly 25 years.

In the Seljuk period, this technique was applied to kitchen utensils such as plates and bowls. Today, paintings can be prepared by scratching portraits, views or various shapes with a needle on ceramics, tiles or granite thanks to this technique.

Speaking to Anadolu Agency (AA), Erpolat said that she was one of the first students who received an education in sgraffito at the ceramics department in 1992.

She noted that she has focused on this art in her work over time and began trying different techniques and improving herself. "Sgraffito was a living art in the Seljuk period. A lot of work was created in those times. This art was not widespread during the Ottoman and Republican periods, and the Italians adopted and protected this art. Its name comes from here, as well. The name sgraffito is actually 'kaşıtıraş' in old Turkish. Ever since I started working in this field, I have been trying to make this art known by its Turkish name. This art is generally applied on the glaze of ceramics. As a result of my struggle for innovation in this field of art for six years, I have been able to make colorful paintings for the first time with a new technique applied under this glaze. I am proud of bringing a fresh take to this art. It is a source of pride for me," she said.

Erpolat describes sgraffito as an art of patience. Stating that you need to be patient in order to deal with this art, she stressed, "Creating a shape can take weeks or even months. Shapes are formed with millions of strokes. This art is made by needling ceramics. While working, I almost dig wells with a needle. The work I do is mistaken for black and white paintings and sketching at first. However, each one is shaped with millions of needle strokes when they are examined closely."

She sometimes offers training and workshops in order to spread this technique. The artist stated that she has opened many solo exhibitions at home and abroad and attended various group exhibitions. Erpolat said, "I opened solo exhibitions in Istanbul, Ankara, İzmir, Bursa, Eskişehir and Kütahya provinces. I had a solo exhibition in Lithuania abroad. I hold three or four exhibitions a year generally. Moreover, I try to transfer this art by attending training, workshops and fairs that are held in different cities."