Joy establishes bridge between past and present in art show 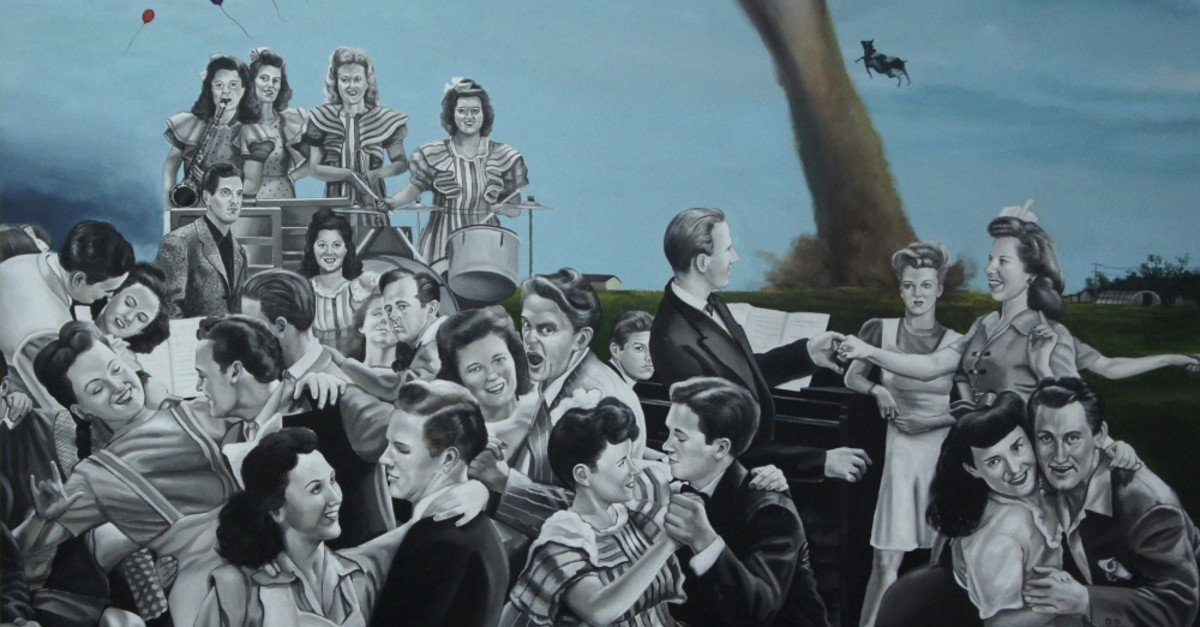 Composing artwork in figurative, utopian, surreal frames within the context of time, extent and space, Sayat Uşaklıgil seeks to create ironic integrities in his body of work on display for art lovers at Galeri 77

Located in Istanbul's Karaköy district, Galeri 77 is currently hosting an exhibition by Sayat Uşaklıgil, titled "Merry Crowds" until April 20. Depicting entertaining, merry loops and moments, the artist's work includes the alternative and minimal codes of a plastic parlance, rather than a more classic influence of painting. Uşaklıgil's individual orientation and the various cultural topics he is influenced by are reflected in his work. He is inspired by some of these cultural topics as well as personal interests, vintage movie posters, book covers, images and illustrations of the past; all the while making these inspirations apparent in his body of work. With an approach toward painting in a minimal and illustrative manner, the artist utilizes acrylic paint in his compositions, which is basically a material that dries fast and is hard to work with but altogether works toward creating impressive visual quality.

Made with acrylic paint, his paintings showcase alternative and multidimensional realities in a figurative density and a spatial depth. His works, in which he utilizes an approach that is illustrative and cinematographic, often include male and female figures compositely juxtaposed. Portraying innocent, merry figures and laughing, smiling, often fun moments, the artist creates a synthesis based on absolute reality with its surroundings, but also nostalgia with figures in a collocation of the past and today. 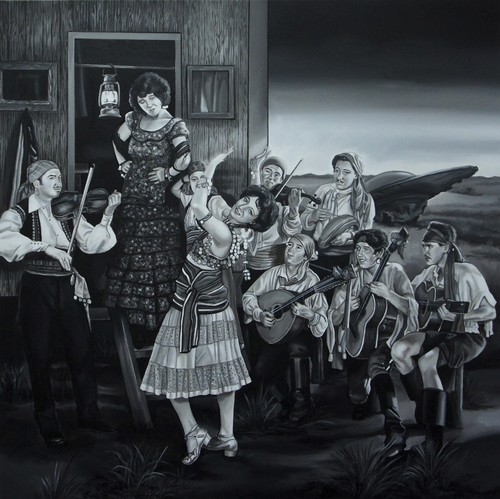 Born in 1975, in Istanbul, Uşaklıgil graduated in the first rank in his class from the Painting Department at Mimar Sinan University of Fine Arts, from where he also obtained his master's degree. He has participated in group expositions with art initiatives "Arkhe" and "216" along with several exhibitions and art fairs both at home and abroad. He continues to work in his workshop in Istanbul.

Uşaklıgil employs black and white vintage photographs from the '40s and '50s when creating his paintings and compositions. These photographs, which he utilizes not in a direct and literal way but as a rendition, create tips and clues in a microscale about fashion, technology, literary or cultural approaches and modus vivendi changing and transforming between the past and today. The figures can be seen on the works in a state of perpetual dynamism and happiness. Being within the moment, living the moment and appraising it are what is being presented as an important indicator for the figures, depicted with absurd compositions.

Comprised of overlapping frames and images reflecting formally on canvas in a spectacle that almost resembles science-fiction, the artworks create independent and striking contrasts in an equation of space and figure. His compositions are created by a natural effect of nostalgia that the artist draws out from the archives of his individual memory regarding those who are in the past and those who are stuck in the moment, referring to times once filled with laughter and joy.

The artist creates striking harmonies utilizing monochrome and an array of bright colors. The works, in which more often than not the background is colorful and the figures themselves are black and white, present several references taken by the artist from the basis of art history. He opts for Baroque in its dynamism and vivid colors and shapes in motion with flashy and flamboyant colors of his own. In this way the joyous states and active movements of the images on the canvas are further invigorated and blended in a coherence of color and form. He presents pastel and flashy colors besides cold and warm ones, all within the contrast of a massive plastic collage. The absolute figurative and spatial eclecticism in contrast further supports the conceptual formalism inherent in the paintings.

The artist presents an illustrative delusion of reality with absurd choices of places between the past and the future and the gestures of the figures within. The contrasting subject is inter-temporality and the dimension of reality. The figures transformed from the frames of the past are relayed in a state of happiness and joy. What's more interesting is that these figures on the collages created by drawings from photographs are not even alive anymore. Whether in space or a ballroom of a hotel, these people come from the past to the present in an absurd integrity, remind us of living in the moment, being mortals, a state of transience and worldly variation. The figurative approach in which the artist also focuses on "Memento Mori" (remember death) is a token of the imagery of happiness, joy, indifference toward terrifying facts and living and experiencing the moment itself.

In these collage paintings which he creates using an illustrative and plain manner, Sayat Uşaklıgil highlights the fleeting states of joy, the ephemerality of time and the value of moments in a pluralist way, utilizing figures in the center with minimal colors or a bizarre atmosphere in the background.