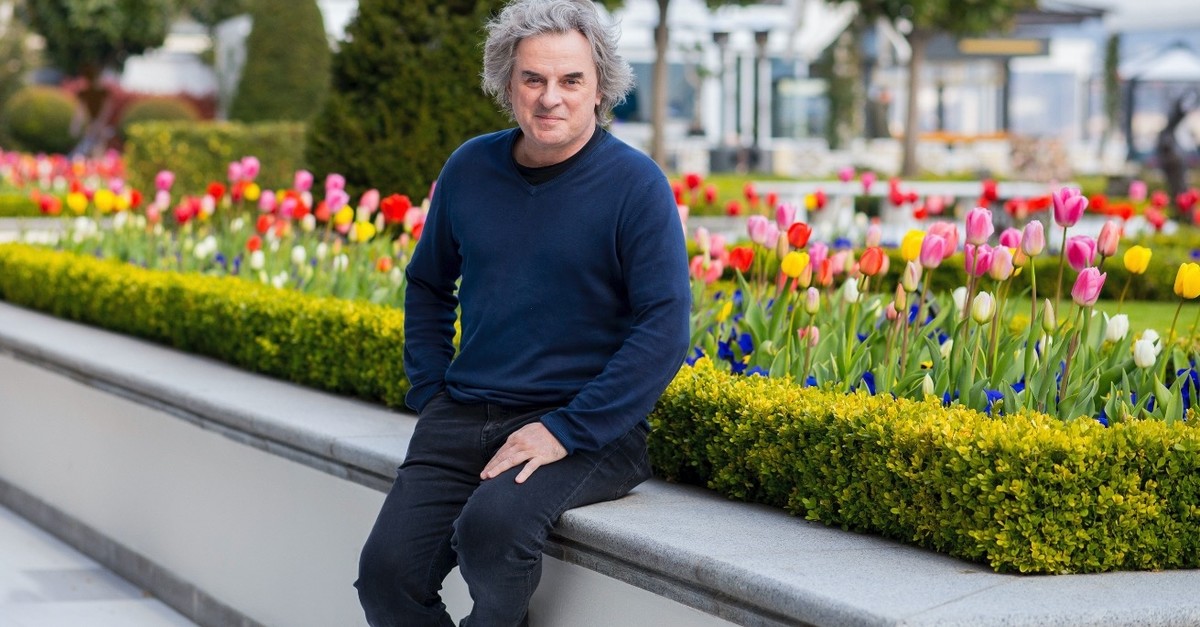 Jean-Christophe Grange gave insight about migration, the yellow vest protests and Turkey, as well as literature and art.
by Burak Erdem Çelik Apr 10, 2019 12:12 am

World-famous mystery writer Jean-Christophe Grange met with fans in the capital Ankara to promote his latest thriller "La Terre Des Morts," now being published in Turkish. During his visit to the city, the writer gave an interview to Sabah daily at his autograph session at a local D&R bookstore. Noting that he always describes Istanbul as the city where adventures abound and agents chase each other, Grange said, "In Turkey, everyone has freedom of religion. The Republic gave this freedom to the people."

He said: "I am happy about my success in Turkey and also very surprised. Turkey, after France, is the second one I've been so successful in. I find Turkish people sympathetic. Turkey's geographical location makes it attractive. There is an opinion that the country is the gate of the East in Asia. I used Istanbul in one of my previous books. I think Mount Nemrut is a perfect place. Cappadocia also drew my attention. We spent a few days in Cappadocia with my children. My daughter skipped school in order to see this place. There is a perfect landscape, incredible structure and magical potential in Cappadocia. However, too few people know about it."

The writer talked about migrants, as well. He remarked that their hearts want to invite victimized people into their country, while their mind says it is not possible. "Europeans should admire the migrant policy of Turkey. Indeed, we also have this philanthropic manner, like Turkey," he said.

Grange explained his perspective on a more current issue, the "yellow vest" protests. "It is a movement that people like me cannot understand. There is democracy in France, and the founding principle of this republic is to choose your own president. After the president is chosen in line with the democratic rulers, it is necessary to let them do their job. The problem in France is that they chose one, but when this person makes a decision, they take to the streets to object it. Apart from the yellow vest protesters, the French public has made a mistake. They are never satisfied. The yellow vest protesters judge by saying they are becoming poor; however, they actually have no idea about poverty in Africa and Sudan, as they do not travel. They cannot appreciate the value of social aid and precautions that are taken in France. Maybe I am being a little harsh, but the French always oppose reality. In life, you need to accept who you are. If you are a small business owner and cannot expand your job, it is not the fault of anyone, like it is not [President Emmanuel] Macron's fault."

Grange also spoke about Mustafa Kemal Atatürk, Turkey's founder, first president and the leader of the Independence War, stressing that he established a modern, secular republic that is seen as liberal by Europeans. He highlighted, "We love Atatürk. He created a republic that gives freedom of belief to Turkish people."

The writer stated that he read classic books until the end of his academic career. He thinks that new writers make people sleepy. He also likes reading French writers who wrote at the end of the 19th century. Emile Zola, Guy de Maupassant and Gustave Flaubert are among his favorite writers in this century. "Writers can emit sparks in the world. Novels always convey the feelings, conflicts and inspirations of people. All these artistic souls reflect what is inside us. They express it in the best way," he said.

Grange said the turning point in his life was when he started doing interviews. He noted: "I was an intellectual who traveled and wandered. I wanted to be both a writer and an artist. Then, I met the occupation of journalism. It turned my life upside down and opened my mind totally. I recognized that big journeys are in books. I was always asking artistic questions to myself. I forgot that these materials are in the outside world while doing the artworks. With journalism, I opened up to the world. I recognized how it enriched me and my own world."

The writer indicated that another turning point in his life was his children. He reported that he totally broke his egocentric structure of being an artist for his children. "The most precious things are my children for me at the end of the day," he added.

Mentioning that he always wanted to paint when he was young, Grange said he wanted to offer other people the pleasure he feels whenever he sees a comic book. "You make art because you want to create the same feelings for other people again. People think that we write because we want to tell something. It is true to some extent, but the most important aim is to reflect emotions for others."