The first of three completed operas by romantic-period Russian composer and piano virtuoso Sergei Rachmaninoff, "Aleko" will be performed for a Turkish audience on Friday, April 19.

While the first performance of the opera, the libretto of which was written by Vladimir Nemirovich-Danchenko inspired by A. Pushkin's dramatic poem "The Gypsies," was held in Moscow in 1892, its Bolshoi Theater premiere was in 1983. 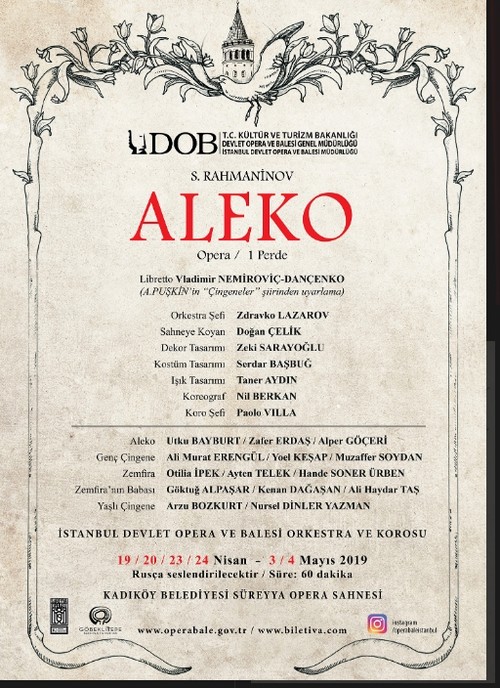 Aleko portrays the love of young Russian man, Aleko, for the gypsy girl, Zemfira. To be acted in Russian, the work's story is as follows: A group of gypsies set up a tent on a riverbank for the night. They light a campfire under the moonlight and sing songs about the freedom of nomadic life. An old gypsy starts to tell a story. A long time ago, he had an affair with a woman named Mariula; however, she abandoned him and their daughter Zemfira for another man. Zemfira now is an adult and lives with Aleko, a Russian man leading a gypsy life with Zemfira. Listening to the story, Aleko gets extremely angry thinking about why Zemfira's father didn't take revenge on Mariula. However, Zemfira doesn't think the same. Stating that she acknowledges her mother was right, she says, "Love is a liberty." Already fed up with Aleko's overly possessive attitude, Zemfira falls in love with a young man among the gypsies.

Staged by Doğan Çelik, the opera will be conducted by Zdravko Lazarov. Likewise, the setting was arranged by Zeki Sarayoğlu, the costumes designed by Serdar Başbuğ, the choreography is by Nil Berkan and the lightning designed by Taner Aydın. The choirmaster for the production is Paolo Villa.