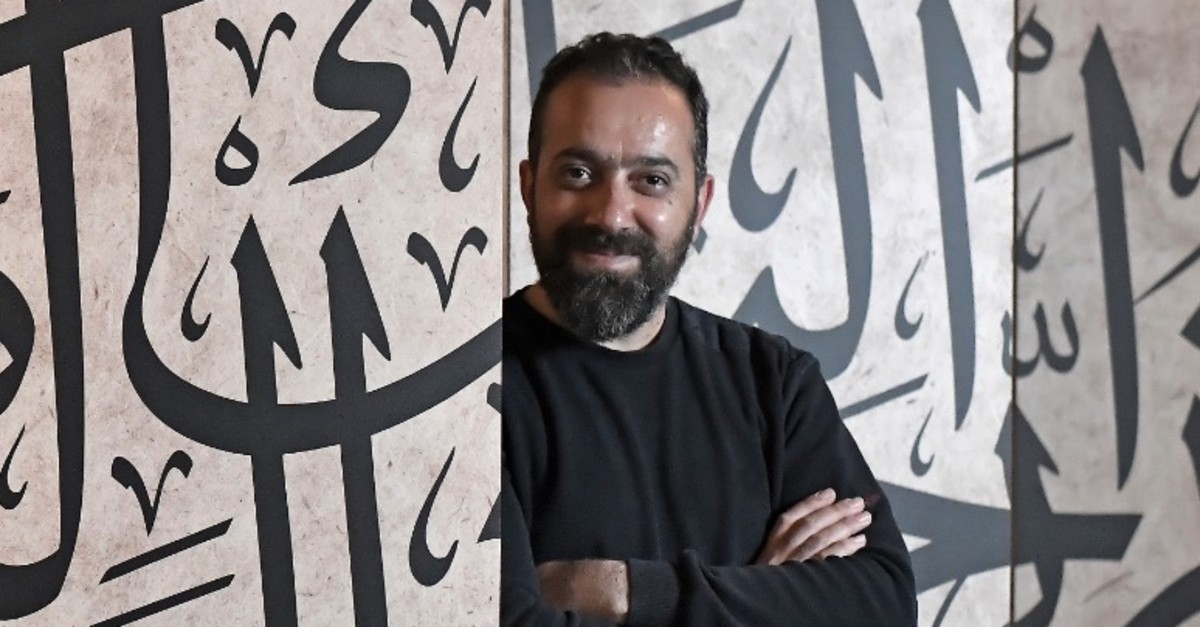 Mustafa Cemil Efe's pieces take their origin from the divine inspiration.
by Daily Sabah Apr 22, 2019 12:07 am

Located in Istanbul's Sultanahmet neighborhood, The Museum of Turkish and Islamic Arts hosts a brand new exhibition, "The Oldest New," by calligrapher Mustafa Cemil Efe. Introducing Hüsn-i Hat (the Art of Turkish Calligraphy) to new generations and various cultures with more than 100 exhibitions he has held or contributed to, Mustafa Cemil Efe is among the shining artists in recent times in Turkey. With his latest exhibition, which opened yesterday, Efe adds a new dimension to the art of calligraphy.

The exhibition has calligraphy at its center and opens the door for many breakthroughs. Faithfully produced in the very old Hüsn-i Hat tradition, the pieces can be labeled modern and extraordinary. The exhibition is the fruit of the artist's work four years ago. Mustafa Cemil Efe, who fits 103 pieces into more than 60 old frames he got from antique markets and private collections in various countries, subtitles the exhibition "Lucky Frames." Coming from the very depth of the artist's soul, all the pieces originate from divine inspiration.

With his latest exhibition, the artist offers a new identity to the frames by coupling the oldest and the newest. The history of the frames, which vary in age from 50 to 400 years, is the point of origin for Efe's project.

Speaking about the project, Efe said: "The Tabula Rasa (blank slate) paradigm is one of the inspirational points for the exhibition. A person is like a blank slate at first and then the slate takes form over time. A frame that is not filled with truth stands like a soulless body with nonsense in it. The reason behind the luck of my frames is that they are adorned with meaning and spirit, taking their origin from divine inspiration. For example, a hand glass made by a master artisan transforms into a frame for my project. The frame, which previously had a mirror in it, now contains the name of our Prophet Muhammad, and the Muslim who is looking at the mirror, first sees the prophet. The idea of placing the name of our prophet, who taught us all the fundamentals of Islam, in a frame is just one of the approaches of our exhibition. Taking the frames as an inner soul that serves calligraphy excites me. I say inner as I think the artist promoting the piece is nothing but a cover and then comes the frame and lastly the letters An artist from Turkey buys an old frame from an antique shop with dirty shop windows in the backstreets of Paris. A beautiful, gilded, engraved frame. Taking the frame to his workshop afterwards, he writes 'Sufficient for me is Allah' and with that statement, the frame sets outs on a journey that might last for a 1,000 years at least. That is the fate of the frame. This fate forms an exhibition and makes people, who see the beautiful, smile. That is exactly what I aimed for with this exhibition. Making people smile and contributing to the birth of a story written by them."

Educated by the late professor Fevzi Gümüş and practicing the art for almost 20 years, Efe will also display a piece by his master at the exhibition out of respect. As a requirement of the practice, the fate and the path of the master and the student fall apart even after death. The art of calligraphy, which blurs with much beauty, is an art that serves the spirit. As was once famously said, "Reading Hüsn-i Hat is like smelling a tulip."

The exhibition will be open for eight days at The Museum of Turkish and Islamic Arts.

Born in Ankara in 1979, Efe completed his primary and secondary education in Ankara and moved to Konya in 1993. In 2010, he started his M.A. at Mimar Sinan Fine Arts University, Traditional Turkish Arts, Department of Calligraphy. He took part in more than 100 national and international exhibitions in many countries, including Turkey, Japan, Nigeria, the Vatican, Iran, Syria, Iraq, Serbia and the U.S. The artist also wrote for the collections of the presidents of various countries. Obama, Putin and the president of China are prominent among them.

Serving as a professional graphic designer and cinematographer, Mustafa Cemil Efe also edits and writes for literary journals. At his workshop in Istanbul's Üsküdar district, Efe teaches new artists while sustaining his work.