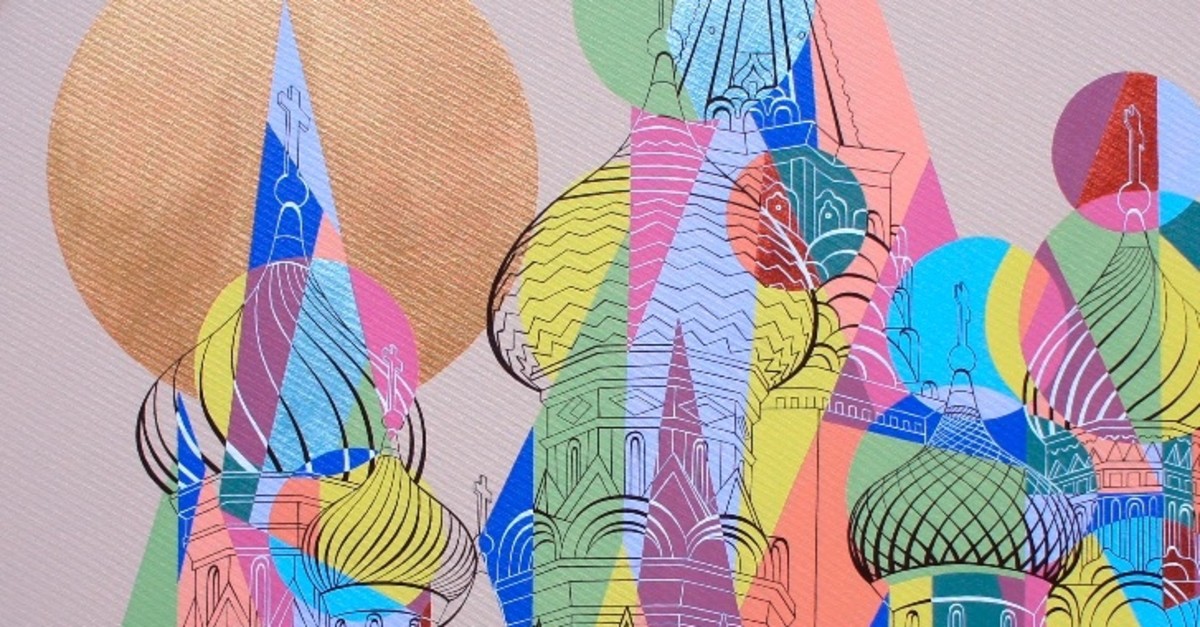 Yalnu0131zcu0131k uses colors so artistically with her own perspective in life that it creates an alternative realm.
by İREM YAŞAR Apr 22, 2019 12:07 am

Born into art thanks to her artist father, young artist Perincan Yalnızcık takes her inspiration from love and uses colors to establish a vivid ambience in her unique realm

A colorful base and some architectural structures similar to domes were first things that caught my eye when I saw some of Perincan Yalnızcık's works at her exhibition "Yüzleşme" ("Confrontation"). While the colors were so catchy, the artist's lines were offering a different aura to the paintings that I cannot properly describe. It was like the more I looked at them, the more I get confused and dizzy from pleasure.

Hosting Yalnızcık's exhibition, Doku Art Gallery also had an appropriate environment in harmony with the atmosphere these works created. The lightening and spacious area of the gallery were the very things that I was looking for. They helped me mingle in the ambiance and get lost in this combination. When I met Yalnızcık to have a talk on her latest exhibition, I recognized that the liveliness of the exhibition exactly reflects the character of its creator. Yalnızcık is such an excited, enthusiastic, willing and hardworking lady that I became integrated with the exhibition and her art as we talked more. 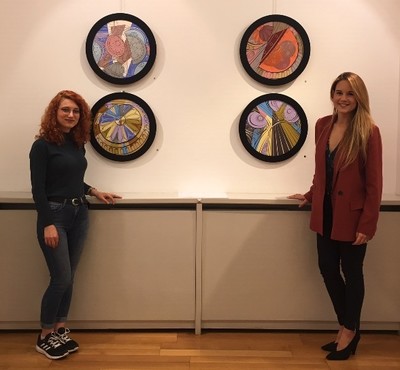 Perincan Yalnızcık was actually born into art because of her father Reha Yalnızcık. He is also a painting artist. While mentioning her journey in the art world, she said that she was highly affected by father. In an environment where brushes, paints and canvases were always together at the ready, it was inevitable for her to have an admiration for the art world.

However, she was not interested in painting. When she was studying at Kalamış College, one of her teachers discovered her talent for singing. As her teacher said that she has a nice voice and fine ear for music, she attended exams to receive an education at a conservatory. While she was thinking that she would do the job that she likes and be in the front if she becomes a soloist, she succeeded at the exams and began to study at the conservatory. However, she was younger than the necessary age to receive opera training. This situation bothered her and her journey in music lasted only a short time.

Yalnızcık was not content with this. She said that she was always a dissatisfied person and tried to do more and better in every job she did. In one period of her life, she wanted to deal with textiles. Her father warned her that it will be really tiring and hard for her to make an effort to succeed in the textile department with her busy daily schedule. Finding her father right, Yalnızcık chose the department of handicrafts at university. Her father remarked that she will both learn textiles and motif in this department, from which he graduated as well. The department was comprised of two branches - textiles and illuminated manuscripts. As you all can guess, she chose the textiles department. She thinks the education that she received there still affects her art. Yalnızcık, then, did not want to continue her career in textiles as she realized that she had a deeper interest in painting. She was even taking extra lessons from the painting department during her university years.

This talented artist works as a visual arts coordinator at a school now. While working in the weekdays, she also sustains her painting work after school and on weekends. When I asked about her creative process, she said that she did not wait for inspiration. "I am a disciplined person. I am at my work table at certain hours. I discovered my style by improving my works. For example, I do not like my first paintings when I see them now. In my paintings, there is serious mathematics. I first measure and draw in a concentrated way, then transfer them on canvas," she continued.

Yalnızcık is also a travel lover. At her young age, she has already visited 30 countries. Noting that one of the reasons why she chose to become an artist was also to have a chance to travel, she stressed, "I feed on the places that I visit. I can say that they are my inspiration source. I use religious structures like mosques and churches. I take them to pieces and combine them with lines. I try to imply that no matter how people separate in line with religion, they should always come together in a way."

After learning the religious buildings and their parts, such as domes, are especially important for her, I wondered about the effect of the traditional in her art. As she has a background in handicrafts and learned conventional motifs there, she stated that she is an artist inspired by the traditional. She likes traditional works but thinks that they should be modernized in some places and become integrated with European art. "I know the traditional styles and want to turn them into some new inspirational form."

Yalnızcık's "Yüzleşme" can be a good example of her perspective on the traditional and the modern. While you can find some familiar motifs in her works, you will be mesmerized by the artist's new view on them. This was the feeling that I could not describe in my first meeting with her works actually. In the exhibition, Yalnızcık describes the concept of love again. Even if some people can understand her paintings as only based on religious themes, Yalnızcık said that this is not true. The message that she wants to emphasize is totally different. As mentioned above, she tries to make people come together regardless of their religious beliefs by using details from different sacred places. Even if the message is mistaken sometimes, the artist advocates that writing a manifesto that explains the message of an artwork is not the right action for artists. She wants to leave the interpretation part up to her visitors.

In "Yüzleşme," she tries to reflect that we all love everything conditionally. She said, "As I grew up, I recognized this reality. I confronted it. This exhibition reflects my confrontations in terms of love."

Continuing her creative process relentlessly, the artist aims to open a group exhibition with her father in May, after this exhibition. However, this is not her only plan. She wants to create her own brand to let all people reach art. She sustains her work in this way and also plans to continue her academic career. She wants to open her other exhibitions abroad as well.