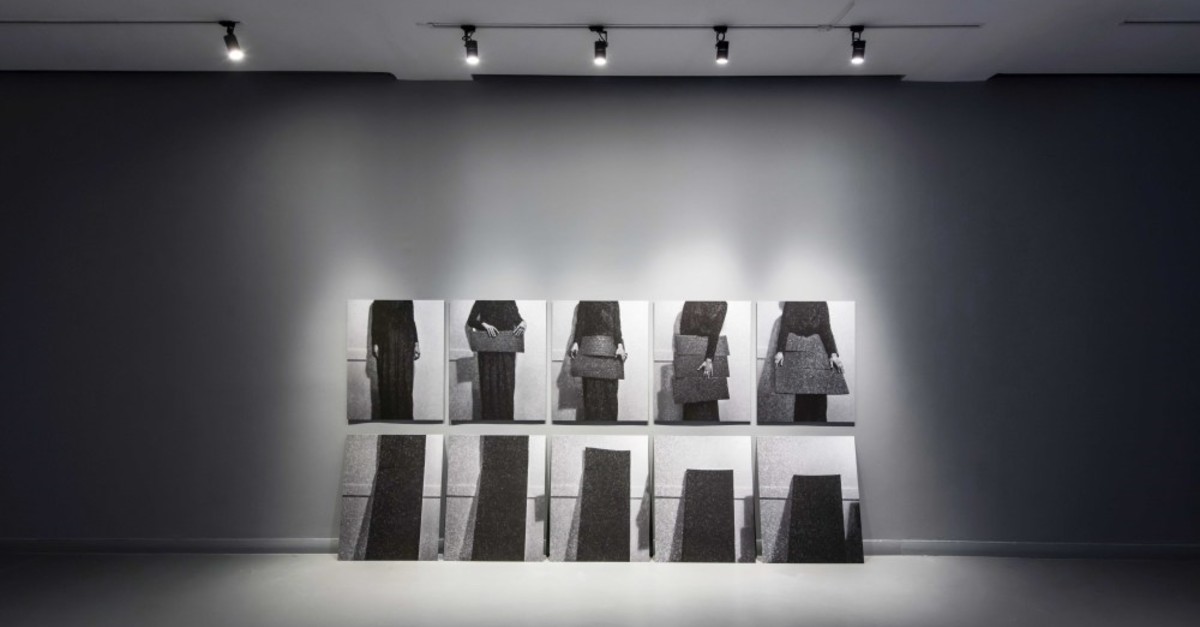 A view from the installation ,Temporary Sameness,, photographed by Kayhan Kaygusuz.
by Matt Hanson Apr 27, 2019 12:03 am

‘Temporary Sameness' is the third solo show by Zeynep Kayan. Its eight videos and 10 stills will be exhibited at Zilberman Gallery until May 4. To say her work is a study in minimalism is to overlook the subtlety of her approach to video and the still photography that results from her eccentric focus

A funny thing happened at Zilberman Gallery on the evening of April 5. A tight-knit crowd of viewers and ears stood in the presence of Kayan and Clotilde Scordia, who wrote the erudite text of the exhibition catalog that was launched that evening. Scordia had flown to Istanbul from Paris to speak to the small gathering. She exuded the intuitive grace of youth that is not unlike beginner's luck, and with a precocious attitude guided a chorus of thinkers to approach the intangible material, its visual motifs and transformative concepts. Through a variety of moving and still images, Kayan conjured a puzzling, cerebral tonic. At one point, a representative from the gallery stepped forward and asked Scordia a number of questions that directly referenced her text. Scordia had integrated a term from French art history that does not translate into English, "mise en abyme," meaning to place a copy of an image within itself, a self-referencing technique known to metafiction.

The audience orbited about the impromptu conversation between Scordia and Kayan in the main gallery. Questions floated from one piece to the next. A woman held up her chin with a fist of knotted fingers, deliberating with a refined air. A younger man shifted his weight, crossing his legs as he threw back one end of his fashionable scarf. The demographic range was broad.

What was not entirely clear was whether the conversation had changed its focus from the art to the text. In the guise of a catalog essay, it appeared that the piece of writing initially tasked to respond to the work of the artist took on a life of its own. Its apt reflections snuck past the author even, and the curators, before leaping into the collective consciousness, exemplifying an unprecedented degree of literary merit and critical breadth spanning not only the subject that inspired its publication, but towards a reinvention of language. 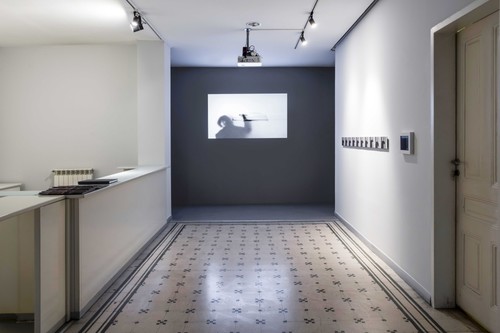 A view from the installation "Temporary Sameness," photographed by Kayhan Kaygusuz.

It was a typical Friday night in Istanbul, energetic as the weekend hubbub spiked along İstiklal Avenue where the prominent gallerist Moiz Zilberman is celebrating the 10th anniversary of his two exhibition spaces at Mısır Apartment, an elegant, multi-venue Ottoman-era building named after the Arabic word for Egypt. In 2016, he opened an annex in Berlin's Charlottenburg district, where the show, "Habituation" by Selçuk Artut recently closed, though highlights will be on display in Istanbul until May 4 as well.

From text to art and back

"Equally mixed, white and black give birth to grey, which is the color we see when we close our eyes and also the first color human beings perceive when they are born. Apart from the grayness that appeared in Renaissance painting, grey only appears in an efficient and long-term way in art history with the advent of photography at the end of the 19th century," wrote Scordia. "From the auto-chromes that appeared in the first days of the 20th century to the 1950s and 1960s, color photography was considered unfaithful to reality, colors being deemed as imprecise and fake."

The art writer Jarret Earnest introduced his book of interviews with the most seasoned hands in the trade, titled "What It Means To Write About Art" (2016), with the proclamation that "writing criticism is a craft that contributes palpably to our shared world... that critics have more in common with artists themselves than with the reactionary hacks of popular imagination." In his intrepid research with famous poets, novelists, essayists, and historians who wrote about art for an average of three decades to subsist and mature, he affirms: "Every critic is in some essential way self-made."

While the majority of readers may insist that a critic, or even an art writer or historian merely responds to creative work after the fact, Earnest defends of a more complex analysis. Writing, regardless of its topic, has the capacity to assume a greater profile than that afforded by the traditional compartmentalization of subject matters and academic or artistic disciplines. Enter contemporary literature. Equally, art is oftentimes thoroughly immersed and responsive to the critical milieu. In a like-minded spirit, Kayan is inspired not by text, but performance, specially "Accumulation" (1971) by Trisha Brown. The artistic genealogy is clear in her self-directed one-woman shows. That a vision spirals out from a single movement yet constantly returns to its essential points is common to the choreography of Brown and the performative video art of Kayan, who executes her vision through curated screenshots drawn from the timed looping of her videos. She cuts a sheet of paper in half, hangs a coat and catches it before it falls, and balances a flat board above her head while placing a second one between her and the camera. "Temporary Sameness" has a similar edge to the action images she created from a temporary studio in Berlin for the winter group show at Zilberman, titled, "An Exile on Earth," where Kayan captured emotional metaphors of the refugee experience with startling relevance.

It's not all black and white

For art lovers and instant gratifiers out for a surface-level experience to please the senses, "Temporary Sameness" is not ideal. The exhibition features her latest series. Most works have a grainy, low-quality that might be typecast in the vein of abstract art appreciation. The show is not an exercise in aesthetics. Its black-and-white spectrums are mute and ambiguous. Frequently, people who see the art of Kayan confuse her with the generation of early video artists from the 1970s for example. Kayan was born in 1986. She represents a generation who came of age before rampant social media addiction hijacked adolescence.

"Temporary Sameness" strikes a chord of sincerity, innocent and searching. Kayan is personable too, with her quirks of perception, repetition, how she handles props and obscures her identity. The equivalent in music galvanized popular recording with lo-fi returning mainstream perfectionism back to the scratchy instrumental hip-hop of the 1990s. One looping video shown immediately across from the gallery entrance has Kayan reaching through her frame out of a softer focus, into to a rectangular area at its center which is sharper. She is grasping for an object in the post-real void.

The trans-media work of Kayan dialogues with space and its opposite, revealing the emptiness of barriers and the constructs of vacancy. She animates, tests and merges the limits of both virtual and physical manifestation. She has an uncanny sense for penetrating the invisible and flickering lines where the expanding and contracting digital world pervades into the palpable impasses of earthly existence. These distinctions are blurring with the advent of hyper-realistic liquid crystal displays (LCD), face and voice recognition, artificial intelligence, fingerprint touch, deep learning, and the list continues far beyond authorized public knowledge. Out of sight, out of mind, the proverb goes. It is an apt metaphor for "Temporary Sameness."