Through the lens, from Mardin to Mardin 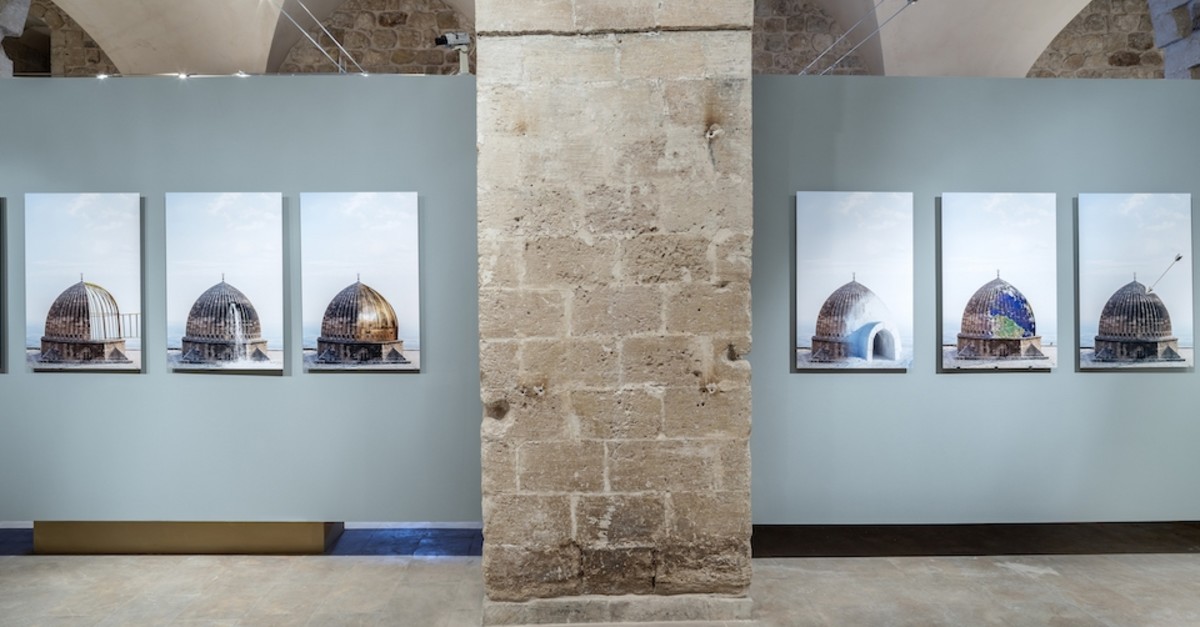 In the mesmerizing texture of the southeastern Anatolian city of Mardin, Sakıp Sabancı Museum is exhibiting photos taken by the local Mardin people, who took part at a workshop at the museum, witnessing the city's amazing architecture and urban culture

The exhibition offers a selection of photographs taken by 17 young talents who took part in the workshop, coordinated by Ahmet Elhan and under the leadership of contemporary photographer Murat Germen. The workshop was held within the context of Germen's solo exhibition titled "Photography's Diverse States - Murat Germen Sectional Retrospective," which concluded on March 31.

The photographs taken by the participants concentrated on the dynamic between the notions of "time /space" and the contradiction of "representation of the building, building of the representation." After five months of work, participants at the workshop were ready to exhibit their work.

The workshop had 17 participants in total, including a 12-year-old child and adults from various professions. Mardin, the city where various ethnic and religious identities live in peace together, grabs attention with its unique and rich architecture. The participants who took part in the workshop bestow their city an important visual memory while presenting pictures of the city with a professional perspective at the same time.

On Monday, photography artist Murat Germen spoke at a press conference on the influences of the workshop both on the lives of the participants and him and the art life of Mardin: "Although the previous exhibition was my solo exhibition, I'm more excited now. This one was an unforgettable experience. My exhibition lasted for six months and was seen by 52,000 visitors. That's why I sincerely thank the people of Mardin. The fruits of the workshop we organized within the context of this exhibition stand as a model study for other museums. It is normal work for museums to hold exhibitions, however, exhibiting the resulting works is quite rare. In such terms, we witnessed a unique process. Photography historian Engin Özendes, who is one of the prominent photography curators in Turkey, also participated in the workshop with her presentations. I conducted the workshop with my precious friend, Ahmet Erhan. We visited the city three times for the workshops and for the fourth time, we came to hang the works at the exhibition site." 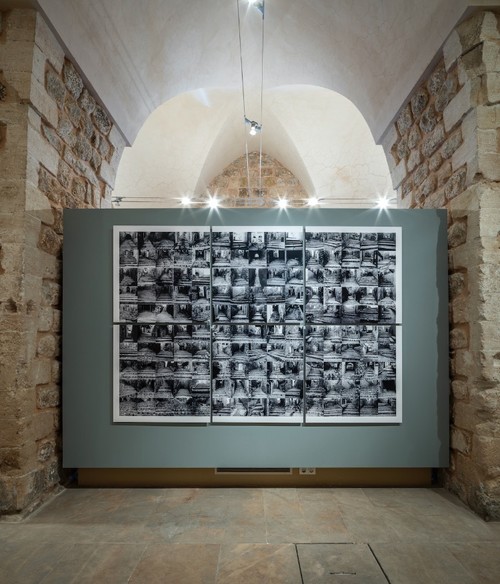 "At our first visit, Ahmet and I spoke about ourselves and our work. We tried to show that photography is not just a pure picture but also an image and it's been used to convince humankind since its invention. We also said that it can to be decorated and that decoration may change over time in accordance with given conditions. We stated that every image is ultimately an encoding and then we focused on the ways of decorating it. We thought together over the relationship between the time and space throughout the workshop," Germen explained how the conceptual frame was formed.

Shooting is not always enough

"We shared with the participants that just shooting a picture may not be enough and the work needs more steps in the following process. We went on by creating an exchange of ideas with Ahmet, in the presence of the participators, rather than focusing on how and why to do the job. We offered a new perspective for the participants informing them about reproducing techniques like Photoshop and extra encoding. Beforehand, they thought any extra practice on the first draft was wrong. Thanks to the workshop, they all learned that they can recreate works in accordance with their own feelings and desires. At the end, we are presented with splendid work that crown all the workshop process and we wanted to exhibit them all. Teaming up with the people of Mardin, we enjoyed the pleasure of creating together." 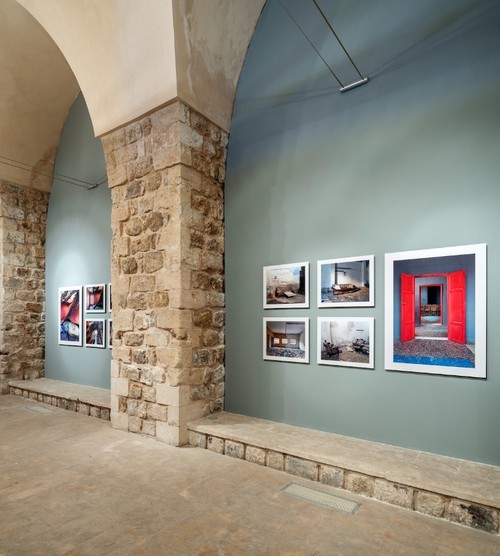 The manager of Sabancı University Sakıp Sabancı Museum (SSM), Dr. Nazan Ölçer also contributed to the project a lot. "Since the foundation of SSM Mardin City Museum, we held various exhibitions in the city. Inviting the exhibitions in Istanbul to Mardin, we offered them to the

taste of the city people. This time, I exultingly witness that we exhibit the work by Mardin people and maybe we will take their work to other cities," Ölçer expressed her enthusiasm about the project.

Engin Özendes, who contributed to the workshop with her presentations and seminars, noted, "In general, shooting a photograph is de facto an ordinary act. What makes a difference starts when the eye and the brain behind the machine get involved in the action. Holding an exhibition is undoubtedly a precious act, however, holding it at a museum is extraordinary as those institutions embrace them with a special approach."

Stairs and abbaras, stone arched passageways between houses, play an important role in Mardin's unique urban architecture. As the city is located on an old hill, the only way to the houses located over the hill consists of narrow streets and stone stairs. At the intersection points between the houses and the streets, you come across abbaras, which are among the prominent forms in Mardin architecture, standing as the beginning points for the stairs. Workshop participant Ayhan Arslan, who is also a fresh graduate of architecture, created a collection that portrays Mardin stairs in an ascending form. The title of her collection is "Merdivenler" ("Stairs.")

"I brought together the pictures, all of which I shot from the same perspective with my mobile. As I used a certain filter shooting the pics, I didn't make many arrangements for them. Our mentors Ahmet and Murat advised some interventions on the light. This is my first exhibition. While taking these pictures, I didn't even think about that they will be a part of an exhibition," she said, expressing her excitement.

In the city of Mardin, which consists of many old structures, destruction leaves a traumatic memory. While some of the structures failed to stand the test of time, some others were demolished for the sake of new projects. 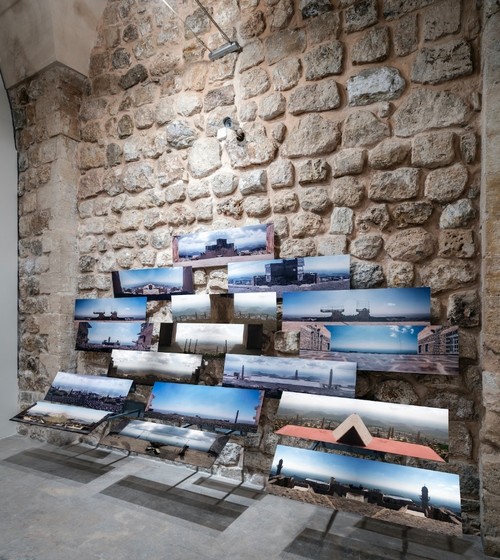 Another participant, Nurullah Değer, took the picture of the Melek Coffee House just before its destruction and saved its image as a present for history. "I wasn't interested in photography that much before the workshop. I loved traveling and sightseeing, but I was against taking photographs to sustain the joy of seeing. Then, I thought about why I did not record the beauties I witnessed. At first, I used my mobile phone for shooting. Over time I developed my skills and perspective and I started to use a small machine. My work here shows the Melek Coffee House at the Republic Square. That structure does not stand there anymore. That was the only cinema hall in the city once. It was home to so many memories of Mardin. It was a meeting point for most people. The ground floor was a coffee house and the upstairs was a cinema. It was dominating the panoramic view of Mardin. Thinking of all the people who spent time in it, I concentrated on the time/space relation revolving around the building. I tried to create a composition with old furniture and the light beam inside." He participated in the show with his work titled ""Şehrin Hafızası" ("Memory of the City").

Graphic designer Ceylan Amak offers recreation by inserting some objects on the dome of the Great Mosque of Mardin via Photoshop in her work titled ""Obje Kaynaştırması" ("Merging Objects"). "At university, I was busy with studio photography for four years. I was working on portraits. A great part of graphic design, which is my own profession, requires creativity. Here, I reinterpret the dome of the Great Mosque with some technical interventions. All the photos emerged as a result of merging an object with other objects, and all of them reflect my inner world. I made use of the similarity between the forms. I picked objects aligning with the round form and fixed them on the first draft."

Young photographer Yusuf Baran Değer started shooting the tops of houses of Mardin, characterized by flat surfaces, on which he spent his childhood, much before the workshop. "I was shooting as an amateur. I took a few photographs taken with a focus on the rooftops. After the workshop, I decided to go on with the same series. The integrity is portrayed via the plain. Roofs have a great place in the urban culture of Mardin. Mardin roofs offer the scenery of the Mesopotamia plain. Those who came to visit and those who live in Mardin see this panorama. However, it is not caught by everyone, they take it for granted. The locals eat, drink and sleep on roofs. They are the intersection points for us, the city people. Children play games on each other's roofs. With some small interventions, I tried to create an awareness of this architectural culture." His micro collection in the show is titled "O Anlar" ("Those Moments").

For those who visit Mardin, the city that comes first among the "must-see" places of the region with its splendid urban architecture, sophisticated handicrafts and people living in great harmony, they must definitely visit this exhibition to have a better perspective on city life and architecture.