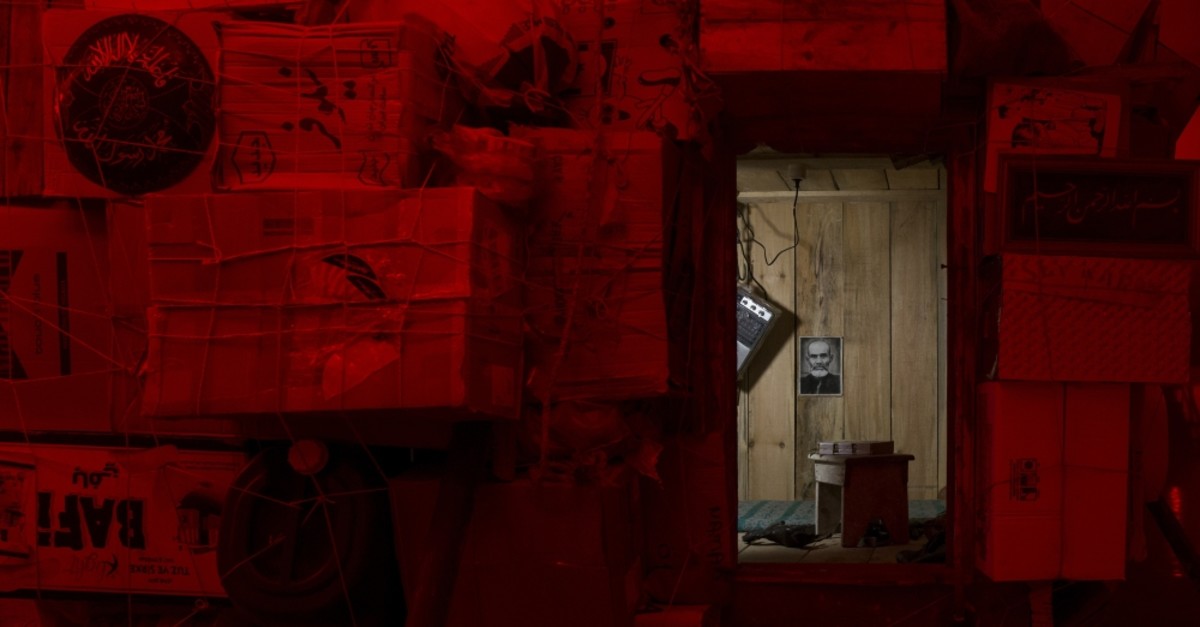 Among competing businesses in Sirkeci, a peculiar installation emerged in the name of contemporary art. Protocinema, an organization offering ‘site-aware' commissions, is presenting PROJECTÖR at Gürün Han until June 1. The artist is Mike Nelson, a two-time Turner Prize nominee who has frequented Istanbul for 30 years

The map is not true. After every sharpshooting tech advance delivered via satellite from Silicon Valley, an information fallout prevails behind the ancient walls of Constantine, in the heart of Istanbul's old castle fortress. Once inside the lost Roman city, time and space work in mysterious ways. Gürün Han, built in 1954, is a relic of a forgotten era. Its textile workers still hang by a thread and live on a shoestring. Its faded, pale concrete exterior is neighbored by an unexceptional minaret. A bit more of the chipped, discolored paint falls off five times a day.

The familiar workaday must of the Han opens into a commercial factory, a mall of workshops where wholesalers make, package and repair the damaged national product. Up an antiquated elevator to floor 7, Mike Nelson has reconvened his past lives in the megalopolis where people disappear in its polluted haze and return half-human, half-artist. His installation, PROJEKTÖR fleshes out the ongoing, narrative experiment of modernity across 16 rooms.

The audiovisual multimedia at PROJEKTÖR gives a weary first impression, with its sideways taxi cams stereotyping the foreign, outsider perspective that weighs heavily on Istanbul and its cultural self-determination. What was once New Rome is now in the middle of a sprawling, global capital struggling to carry a multiplex of historical burdens, including an extractive tourism industry and other tropes that disassociate workers, the religious and the intelligentsia from the expatriates, immigrants and refugees of the international community.

PROJEKTÖR seeks to unite haberdashers and cobblers with cineastes and intellectuals, in the process pouring salt on the wounds that divide them. A man walked into one of the rooms where the videos of Nelson festered in the spider web light. He wondered aloud to his entourage of fellow laborers why the frame had not been righted. On the glass wall, black lettering remained to advertise quality shirts. Nelson designed to leave the rooms he occupied unaltered, dust and all. Many had not been cracked open for decades.

Nelson, in his unmistakable denim, exudes a carpenter's aesthetic. Arguably, his videos are keen for messaging the medium in the spirit of Marshall McLuhan, who once said: "First we build the tools, then they build us."

Representation aside, the feat of having resuscitated a most wacky outfit of early projectors is notable. But for anyone not running a vintage shop or obsessing over outmoded videography, the point is blindingly out of focus.

PROJEKTÖR relays the puzzling temptations of biennial adventurism. Nelson participated in Istanbul's in 2003 and on behalf of Britain in Venice's in 2011, so he is used to treading that daring line, the pariah concept in modernism, asking what is art, and what is not art. In the context of art's modernization, Gürün Han poses a melange of challenges and opportunities to both merge and distend these concepts into a seamless, "site-aware" experience. 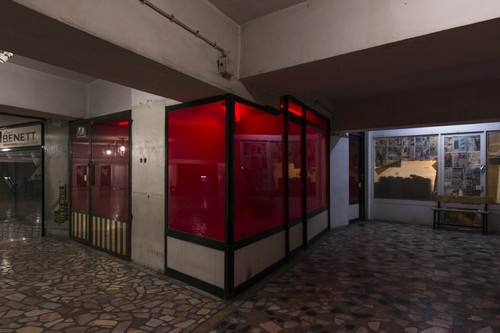 There are rooms at Gürün Han open for the run of Protocinema's commission that, to the naked eye, are entirely devoid of any resemblance to artwork. Bathed in demonic, red light, construction materials are strewn about for a derelict ambiance out of a horror film, recalling the torture scenes of political thrillers. Not a word identifies the inclusion or exclusion of these sites. The train wreck facade of modernity has run its course, returned to its source disillusion in the hands of a workforce without work, as art without purpose.

Across the Golden Horn in the shamelessly gentrified district of Karaköy, the classic essay, "Against Interpretation" (1966) by Susan Sontag, is perched at FiLBooks, a literary cafe specializing in publishers of photography. "From now to the end of consciousness, we are stuck with the task of defending art," she wrote to the lasting echo of her voice as a luminary of modern thought. "To interpret is to impoverish, to deplete the world – in order to set up a shadow world of 'meanings.'"

The discord of holy text and polytheistic myth from rational interpretation is lucidly explained by Sontag, whose argument has matured with age in the context of an installation like PROJEKTÖR. It requires an obscure, connoisseur's knowledge of contemporary art not just to enjoy the rough content and hard-earned concepts, but also just to be what it is. Such mental preparations are a tall order for the tired, hunched man wearing what he sells, out to straighten his back on his tea break with a crumpled, glossy press release in one hand, scratching his scalp with the other before sauntering off, nothing gained, nothing lost, except for a few minutes. His presence locates an enduring wisdom, namely that the art of interpretation is not visual art. Its essence is more like literary criticism, the meaning gleaned from a cerebrally abstract, post-visual anti-art.

The worker entered early modern art history as an image through which to express realism with a social import. The empiricism was a persuasive rallying cry to human unity despite the barriers of national histories, languages and territories. The task of contemporary modern artists like Nelson in cahoots with Protocinema is to invite the worker to become a spectator, even critic. As a result, art will further its capacity to dialogue with manufacture, towards a reciprocity of invention and industry. An installation like PROJEKTÖR begs the question of whether art is really the ideal way to achieve this.

Gloomy rooms surround the centerpiece of PROJEKTÖR, a kind of post-consumerist hut. Its interior is designed like the hideout of a Muslim ascetic or political refugee. As the nucleus of the installation, it is lit from within, constructed of boxes on metal stilts. Together with faceless taxicab drivers, Nelson's central work comes off as Orientalist at worst and politically muddled at best with its Arabic calligraphy, political cartoons, and advertising imprints.

Inside the fort of boxes, a book with Atatürk on the cover has been left closed, its spine taped from wear. There is a portrait on the wall of a bald, bearded man. A transistor radio spouts white noise dangling from the ceiling. Next to it, a birdcage hangs above a horse figurine, evidence of a new generation born in isolation. The piece relays a sense of remoteness and abandonment from the world.

The contrasts from dark red to spotlight white are eerie, conjuring the unsettling specter of an outcast at the edge of modernity. The rebel, the other, the worker, the opposition strikes fear into the heart of civilization, a conflict of paradigms that defines the classist elitism of contemporary art. But the only place light enough to read at PROJEKTÖR is inside the fort of decommissioned boxes. It is only there where education is possible, the most potent catalyst for social change. Much of the rest of the seventh floor at Gürün Han is abandoned, but until June 1 it will feel like someone previously unseen had been there for a long time.