'Game of Thrones' finale: The Wildlings have won 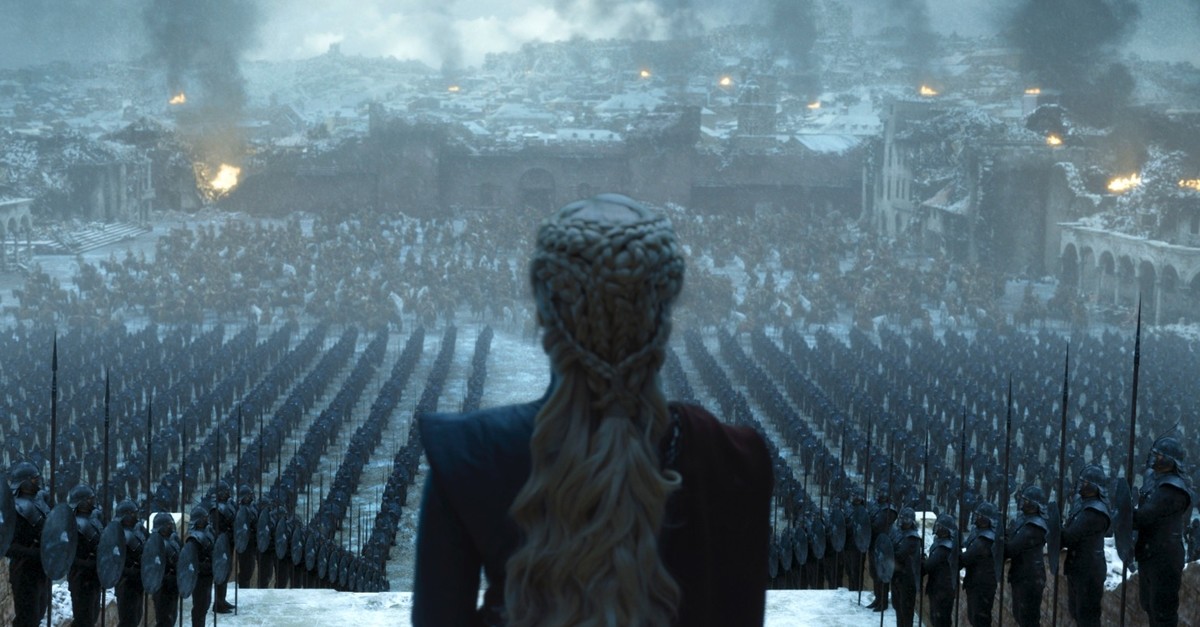 This image released by HBO shows Emilia Clarke, acting as Daenerys Targaryen, in a scene from the series finale of u201cGame of Thrones.u201d
by Nagihan Haliloğlu May 23, 2019 12:13 am

After hooking millions of viewers around the world on their screens for seven years, the HBO series 'Game of Thrones' ended last week. Having abandoned the G.R.R. Martin books it is based on some time ago, the series managed to disappoint almost all fans who may have been expecting too much from a narrative that seems to have intimidated and thwarted even its original maker

The one thing that has given me a jolt - the kind of old school jolt we got in the earlier seasons - in this final season of "Game of Thrones" has been seeing the breach in the wall in the opening credits. I have never, in all the seven years of watching the show, fast forwarded the opening credits, and have continued to marvel at its addictive music and jaunt around the map of Westeros (I have recently discovered a beautiful explanation of why the theme music is so mesmerizing by Tristan Kane; google it!) I had not realized how central the wall was in my understanding of the" Game of Thrones" universe. To see it cracked open like that felt like a taboo being broken. If the wall could break, surely anything was possible now?

In an attempt to understand why the wall was so central to me I went back to the very first episode of the very first season, to see that indeed, that's where the story in the series begins. Three men go through the wall into Wildling territory, and one of them sees a ritual placement of body parts "that cannot have been made by free folk." Seeing this scene, one feels that like all other characters, White Walkers have degenerated throughout the series - from body part artists to an inarticulate hoard that follows the Night King.

The Night's Watch who sees the handiwork of the White Walkers escapes and enters the territory of the Starks. The first Stark we see wielding a weapon is Bran, and naturally on this second viewing everything takes on much more meaning. Then we have the scene in which the Starks rescue dire wolf cubs. We are told that dire wolves are not supposed to be on this side of the wall. We are given to understand that even the wolves have been running away from the new menace that has appeared in the (real) north. This is important for the narrative arc. But also it is a beautiful metaphor for how species had to relocate because of "climate" change.

Actually, the closer I read the scenes in this first episode, the clearer the finale becomes, although it probably should have taken a longer, more sensible route to get there. And it is not only me who's saying it, but also my supervisee who, like G.R.R. Martin, has been postponing finishing her thesis on "Game of Thrones" and eco-criticism for three years. Further on in the scene, the then rather uncomplicatedly malicious Theon suggests that they kill the cubs who have lost their mother but Jon intervenes, and tells Ned Stark that the Stark children should look after them. Now those cubs and I have a history. In 2016 quite by chance I found myself going on not one but two "Game of Thrones" tours, one in Malta and one in Northern Ireland. And in Northern Ireland we were taken to see one of the body doubles for those wolves, and I am not exaggerating when I say that I couldn't have been happier if I'd met another member of the cast.

In this foundational scene, to appease Ned Stark Jon adds that the dire wolves are House Stark's sigil. Indeed, we have been admiring them around Jon's upper chest as season eight kept giving us close ups of his tormented face. So how do animals that are supposed to live north of the wall appear on the sigil of House Stark? Did the Starks live north of the Wall once upon a time? Are the Starks related to the free folk? Did the series already make a reference to it in its seven-year history and did I forget it? Will I have to read the books now to quench my curiosity? In any case it is clear to the audience that culturally the Starks are closer to the Wildlings than to any other culture living in the sunny south. The Starks, with the wolf as sigil, are the obviously a cognate culture to the Turkish one. There are several hero praise poems for Jon Snow written in the traditional Turkish style if you care to google.

Among the Stark children it is Jon who has to go and mingle with the free folk to learn their ways, not unlike city Arabs sending their children to the desert with the Bedouin to learn a purer Arabic. Always the butt of jokes told by the "civilized" southerners, the Wildlings keep to their way of life, and manage, throughout the series, to make the larger world of Westeros understand that the immediate threat that they face is actually the threat faced by the whole human race (how can one not see the environmental metaphor here?).

They are shown as a rag tag bunch when they team up with the Stark and the Unsullied armies but they do their bit to ward off the White Walkers when the confrontation happens in Winterfell. I love the irony of it, the Wildlings basically bring the war down to the south, to the homestead of a people who were trying so hard to distance themselves from the Wildlings. Winterfell is ravaged once again and then the Wildlings traipse back up north. Having made the southern armies take care of the terror threat north of the wall, they return to their now safe homeland. Right before returning north of the Wall Tormund does beckon Jon, telling him he belongs in the "real north." The whole series has been telling us that Jon Snow is too good, too "real" for the likes of intriguing Little Fingers and Varyses of the south. Like the dire wolves on his collar, he belongs up there with "real" people. So although the dialogue in this last season has been cringe worthy, worst of all was Tyrion explaining why Bran would make the best king, I think the series took Jon where he needed to be; a fun fact to remember is of course that in real life Kit Harrington is married to Rose Leslie who played Ygritte.

Although the finale was met with almost universal disapproval there were saving graces, like the emotional parting scene of the Stark children; oh how many times have we seen them lose and then find one another, and seeing someone from Dorne in the council - ah, those were the days when we were treated to beautiful people, dresses, gardens and palaces of the Mediterranean. I kept my eyes firmly on the Dorne guy as the script writers tried, embarrassingly, to inscribe the invention of democracy into the "Game of Thrones" universe. However cringe-worthy that moment was, it also made me realize how we have all taken "Game of Thrones" as some kind of foundational text within which we try to find the roots of the taboos, institutions and other forms of behavior that define the human race now.