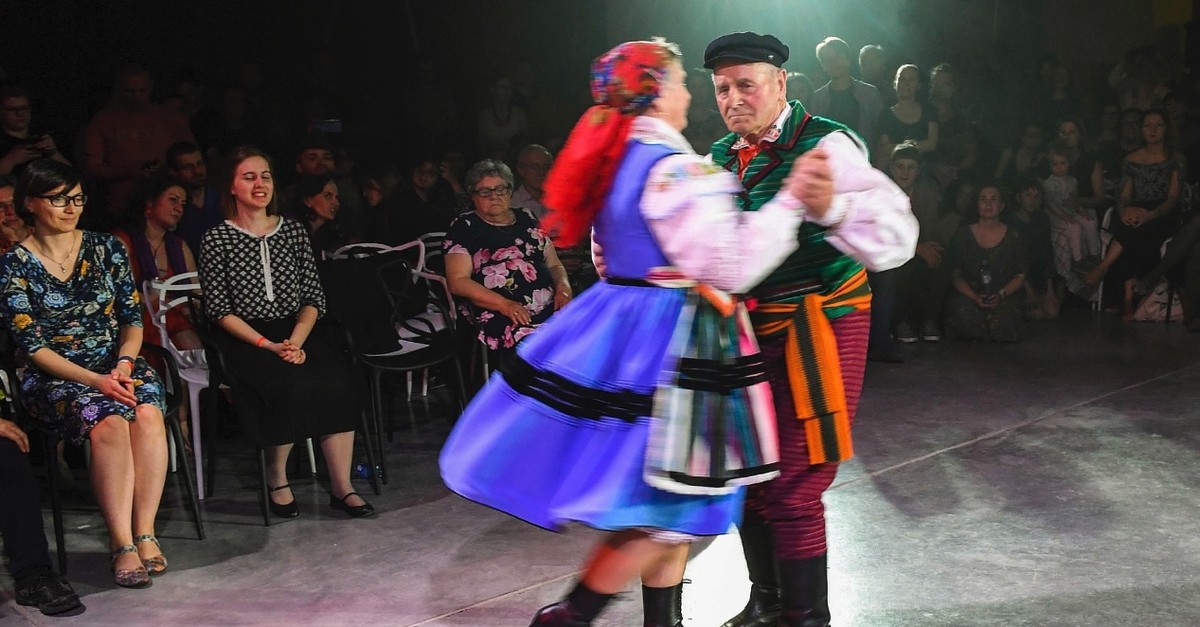 A Polish couple dressed in traditional costumes perform the countryu2019s mazurka folk dance in Warsaw.
by May 23, 2019 12:13 am

Couples spin to the lively tempo of Poland's mazurka folk dance in scenes reminiscent of peasant life from centuries past. To rhythmic violin and accordion, they could almost be back in the simple cottages of Mazovia, the region around the Polish capital, Warsaw, for which the dance and music were named.

Taken across Europe and beyond by Polish soldiers and migrants some 200 years ago, the traditional mazurka evolved, before later almost vanishing.

But now it is making a comeback and not only in Poland, putting a spring in the step of urban youngsters and getting pulses racing and hearts pumping.

"It was forgotten, but when I see all these young people who come to learn from me, I forget I'm old," says fiddle player Jan Kmita, 83, one of the last surviving masters of the mazurka.

He has spent hours teaching youngsters the up-tempo rhythms and steps at workshops in Warsaw.

The Polish mazurka, also known as the mazur, mazurek or oberek, "doesn't really have much to do with the ones we know in France," says Nicolas Roche, a French violinist keen to learn from Kmita.

"It has a very specific sound, rhythmic subtleties and a manner of conveying rhythm that is completely different, with slowdowns, accelerations, a whole swing, a feeling that's very different," Roche told Agence France-Presse (AFP).

Choreographer Piotr Zgorzelski, who specialises in Polish folk dances, describes the dance steps of Polish mazurka as "minimalist, with no jumps."

Couples stay very close, twirling "like a whirling dervish, but they do it together... a good dancer can even spin with a full glass on their head without spilling a drop," he says.

Zgorzelski also said that he had seen interest in mazurkas burgeon among young urbanites keen to reconnect with the rural origins of their ancestors.

Among the mazurka's ardent new fans, Agata Kotlicka, a 27-year-old professional speech therapist, says: "We enter a trance, we can forget ourselves, we don't need alcohol to feel it."

Self-taught Kmita received his first violin at age six and played his first wedding when he was 12.

Forgotten about over the years, his talent was rediscovered by a group of folk enthusiasts, who have spent 30 years crisscrossing Poland in a quest to find and preserve traditional music.

Janusz Prusinowski, a 50-year-old singer and multi-instrumentalist, is one of those who stumbled across Kmita nearly three decades ago.

"We came across these old musicians, it was like discovering Atlantis, a Poland doomed to disappear," he told AFP, of his first encounters with elderly mazurka masters. It turned out that "Poland wasn't a land of musical illiterates but a people able to speak with an original musical language that (Frederic) Chopin himself drew on," says Prusinowski.

He co-founded Warsaw's annual Mazurkas of the World festival that has been leading the mazurka revival for 10 years, now also in evidence in dance halls and other organised events.

Mazurkas are dynamic and bold, with accents often placed on the second or third beat and tempo changes that can take dancers by surprise.

Some experts believe that their earliest traces can be found in transcriptions of religious music dating to the 15th century.

According to Warsaw University musicologist Tomasz Nowak, the term itself first appears in 1708 in a musical notation at a Bernardine cloister in Lowicz, central Poland, where a Catholic nun suggests interpreting a passage like "a real mazur."

Around the beginning of the 19th century, Polish soldiers fighting for French emperor Napoleon Bonaparte took their music wherever they were deployed, even to the Caribbean.

Similarly, a couple of decades later, Polish insurgents who lost the struggle against the army of the Russian tsar fled to France, taking the mazurka.

In France, the dance became fashionable, changing and evolving as it was adapted to local tastes.

Meanwhile, back in the Polish countryside, the mazurka could be heard at wedding parties until the 1950s.

But it was all but forgotten with the advent of radio and the new music it broadcast into villages.

From shame to pride

Poland's communist authorities tried to transform folk dances like the mazurka into "national dances," making them elaborate stage shows to tour at home and abroad.

The 2018 film, "Cold War" by the Polish-born Oscar-nominated director Pawel Pawlikowski, focuses in part on how these stage shows were developed.

The last vestiges of the mazurka survived until the 1980s in the depths of the Mazovian region, despite the indifference and even contempt of locals.

After the 1989 collapse of communism, Poles embraced synthesizer-based pop music, turning their backs on some of the music of the past. "We started to be ashamed to play these old tunes," Kmita told AFP.

But shame has turned to pride, as young mazurka enthusiasts have begun flocking to dance halls giving a new lease of life to the music and dances of their heritage.

"It's only just beginning, the mazurkas are going to survive, they were nearly dead and now they're coming back," Kmita says.

"They must like it, I think," he adds, modestly.