Afterlife of the epitaph: Istanbul's lost art in Ioannina 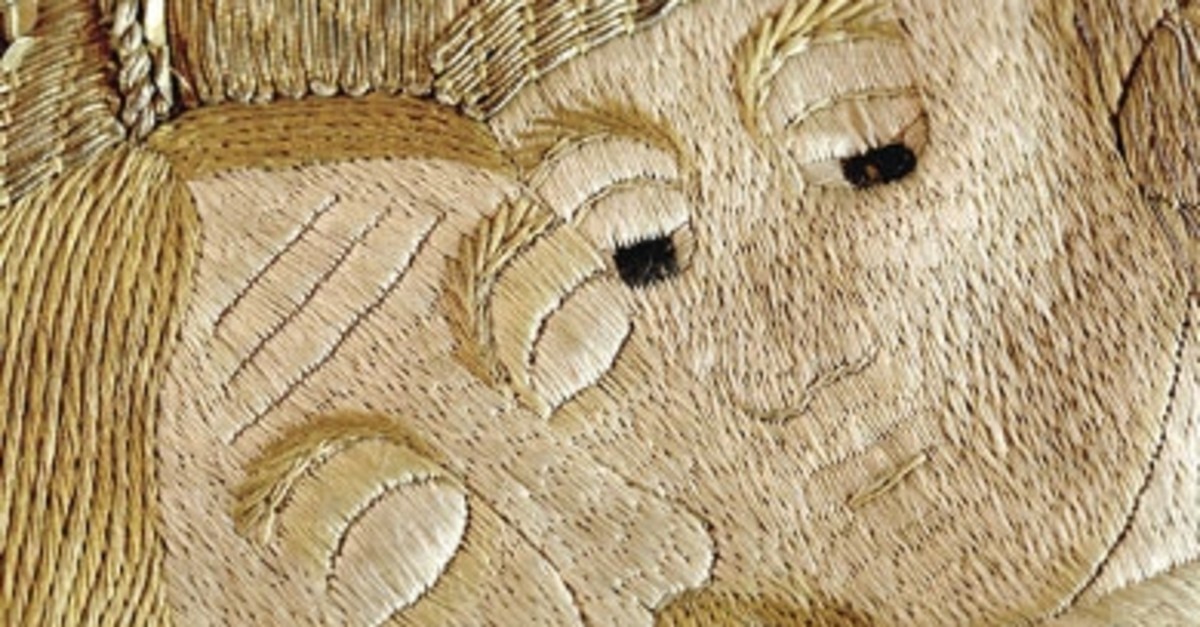 Detail from the epitaph cover from the Church of the Dormition of Mary Archimandreiou, silk, silver and gold-plated metal, attributed to a workshop in Vienna, 1733.
by Matt Hanson Jun 08, 2019 12:17 am

Oral legend follows a rare piece of silver-embroidered silk. Its figurative stitch is decorated with gold-plated metal to depict, "Lamentation upon the Grave," where Jesus rests in peace under his family of saints. It is an epitaph cover from Agios Athanasios Cathedral, the backbone of religious observance in the landlocked, lakeside mountain town in northwestern Greece.

The solemn faces and exposed skin of the icon are painted in high relief techniques on cutouts of canvas. The golden embroidery portrays the heavy folds of ancient, ceremonial clothing with striking luminosity. Vegetal motifs embellished the Greek calligraphy of the "dismissal hymn" (apolytkion), which praises Joseph for taking down the body of his prophetic son from the cross for a proper burial, and not without a liberal use of perfume.

It is said that the mythical funerary veil was a donation, gifted by believers when the Zosimas brothers financed the rebuilding of the Ioannina cathedral in 1830. By that time, Ioannina was the undisputed regional heart of secular education in Greece, cultivating a literary renaissance. In fact, in her book, "The Muslim Bonaparte," historian K.E. Fleming wrote of one gymnasium in Ioannina established by the Zosimas brothers as early as 1769 which educated not only Greeks, but also Muslims and Orthodox Albanians.

In the mid-1700s, the local Ioanniote merchant Panagis Zosimas had six sons who went on to earn a fortune trading between Italy and Russia. The septet of philanthropists advanced Ioannina as the intellectual source of the Greek Enlightenment (1647-1830) during Ottoman rule, particularly with the opening of the Zosimaia school in 1820.

In the 19th century, Istanbul still bustled with perfectionists skilled in the textile crafts of the church. They managed workshops that stimulated the international economy, forming guilds whose proud apprentices strolled affluently along the Golden Horn speaking the Phanariot dialect of Greek on the inlet shorefront neighborhood now called Fener.

The currency of the day was prestige for Christian workers glorifying the church. A single embroidered piece of silk was interwoven with velvet, satin, silver, gold, foil, sequin, semiprecious stones and pearls. The finest work demanded around fifteen months. The price of epitaph covers was measured by its weight in gold. One was worth enough to buy a home in a fancy urban district on the Ionian coast of Greece.

Inside the Patriarchal Church of St. George, the central institution of Orthodox Christianity outside of Russia, there is an embroidered epitaph cover displayed in a glass case above the relic of St. Euphemia the Great Martyr. She was mauled by a lion in an arena in Chalcedon, present-day Kadıköy, for not sacrificing to Ares, the pagan Greek god of war. Her memory is linked with a miracle that clarified the singular Orthodox belief in the dual nature of Christ during the Fourth Ecumenical Council, preceding the Great Schism.

Beside the memorial tomb to St. Euphemia, close to a portioned column rumored to have been taken from the site where Christ was flagellated, is one of the most prized possessions of Istanbul's sacred art heritage, an 11th century mosaic of St. John the Baptist. The reverent ambiance is tread by pilgrims from across the planet, who come to kiss the gleaming icons that are also woven artfully into ritual fabrics. Made with living fibers, examples from the 19th century represent some of the oldest extant textiles in the tradition. 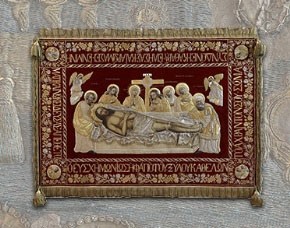 The epitaph cover at the Patriarchal Church of St. George is markedly different from that which is exhibited in Ioannina, although they depict the same scene of the "Lamentation upon the Grave," where Jesus has the air of a reclining buddha, his adorers crowding his bare body, shrouded in his serene passage from life. The piece in Istanbul is dyed along its bordering edge in royal Byzantine purple. Instead of the cross, Hagia Sophia beams upward on the glittering, gold horizon in its original form before it was festooned with Ottoman minarets.

There are three other epitaph covers displayed in Ioannina at the Silversmithing Museum, which opened in the newly renovated medieval castle walls of the Greek city in 2016. They were all made in workshops in Vienna. The oldest is dated to 1733. The minutest aspect of every baroque detail is breathtakingly restored to full vision. Beside each centerpiece, well-lit and flattened out behind plates of glass, is an interpretive touchscreen with points extrapolating on the technical details of the artwork.

Spiral wire is wound and twisted and metallic threads fastened in pairs to create the images and textures of belts, sleeves, halos, shrouds, loincloths, ointment jars and other features set with almond-shaped inlaid discs and a variety of foils and sequins to animate the look and feel, and also sacred symbolism of garments. The religious personages come to life on painted canvas, relaying facial inflections only communicable by a liquid medium. The result altogether is a pre-modern multimedia art form in the guise of a ritual object.

To provide greater cultural context, with a special appreciation for the divine taste of Ioannina's old business class and monastic orders, the exhibition includes a double-sided icon from the Church of the Dormition of Mary on the island of Ioannina, where the remote asceticism of the Orthodox practice has long taken root. The half with Jesus as the Man of Sorrows is ravaged by wear almost beyond recognition. Dating from 1794, the human likeness is visible due to a painstaking conservation process. But the imperfections have a lofty allure.

Yet another example of the endangered art of the embroidered epitaph cover exists in Istanbul. Not far from the Patriarchal Church of St. George, the Bulgarian St. Stephen Church, known as the "Iron Church," stands. Its prefabricated neo-Gothic metal structure was transported by ship from Vienna along the Danube River and Black Sea. In the early 20th century, before the construction of a two-way highway along the Golden Horn, rowboats could moor in view of the stained glass facade that would reflect the turquoise sheen of the fish-filled waters below. There are only 450 Orthodox Bulgarians left in Istanbul, most having resided in Turkey for two generations since unrest in the Ottoman Balkans led to WWI, according to a 2017 study by Magdalena Elchinova of the New Bulgarian University. The waning community mirrors the twilight of traditions like the embroidered epitaph covers. One young Bulgarian Istanbul native named Alex oversees St. Stephen Church as part of a generation witnessing the loss of history.

Under a wooden framework at St. Stephen, an embroidered epitaph cover is lain on the metaphorical tomb of Christ. Its royal purple background dye is touched with a distinctive red for the gold-fringed raiments of Mary, but her face, like the others, is artificial, even photocopied. It was made in Greece, gifted by a woman from Kastoria in the 1960s.