An excavation of sights: The curation of Amira Akbıyıkoğlu 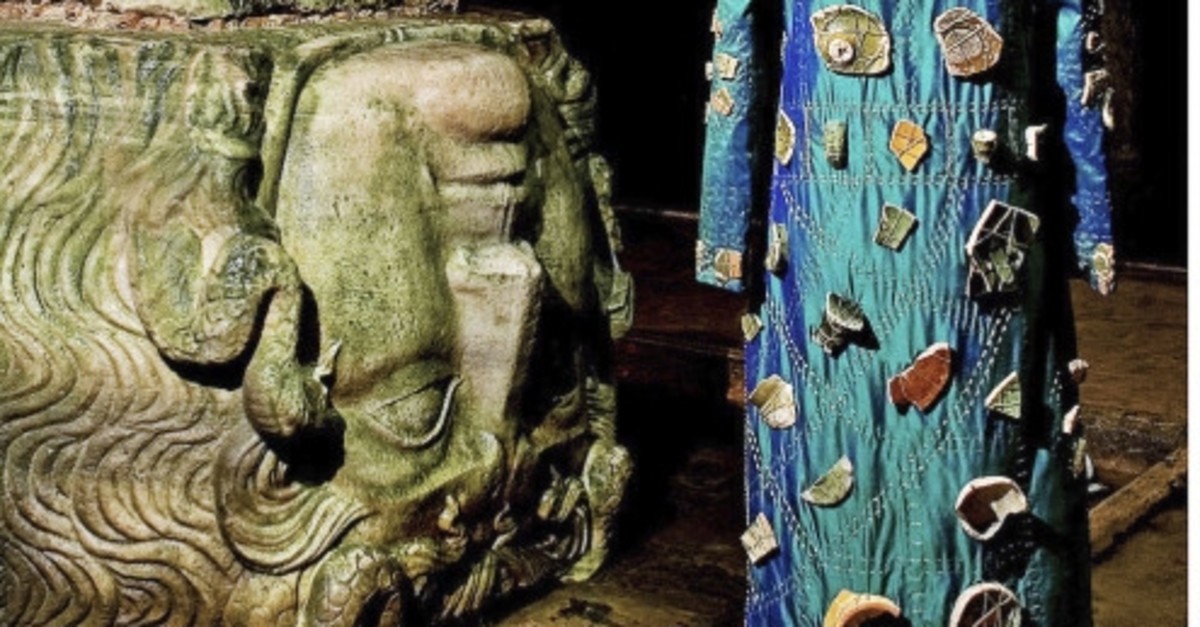 At Istanbul's premier arts complex, SALT Beyoğlu on Istiklal Avenue, 11 international artists are behind ‘Replica of the Original,' until Aug. 18. Amira Akbıyıkoğlu curated the diverse works with subtle aesthetic beauty, exquisitely conveying the fine line between concept and vision in contemporary art

There is a point when history becomes myth and storytelling poetry. In a similar light, national borders exist along territorial spaces that are at once artificial, and yet point to the ungraspable nature of land, beyond anthropocentrism. Laws are meant to be broken, and borders crossed. Natural partitions reconcile the demands of human life with the interdependent spring of biodiversity. It is a consciousness that the ancients knew and expressed in song.

"You lie there beneath Aphrodite's golden ceiling, / Grapes, full with Dionysus' drink," wrote Moero, the first known female poet of Byzantium, active from the 4th to 3rd centuries B.C., whose eternal verses inspired artist Handan Börüteçene to retrace her muses from Istanbul to Venice.

Since the 7th century B.C., up until 1453, Istanbul was dominantly Greek. Approaching the storied sound where Hagia Sophia stands beside Topkapı Palace, reams of orange terra-cotta roofs and classical facades spread outward toward the Thracian horizon west, leaning back to a time when polytheists reveled in the remembrance of epics. They slaked their thirst for battle and feared the underworld in Bosporus taverns.

The timelessness of woman

But there were more feminine graces to the civilization whose might stamped world history with literature, theater, philosophy and the birth of Western art. Moero is said to have been famous in her day, drawing comparisons to Sappho. Her hand brewed a potent potion of passion for the merriment of the everyday, slipping carefree into the magic presence of deities. Börüteçene photographed traces of her legacy from 1999 to 2014. 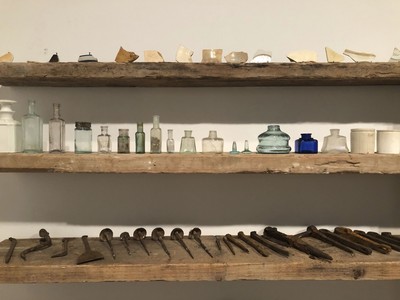 "I Remained Within Myself" vitalizes the well-trod floors of Hagia Sophia. Moero lived about six centuries before it was built, though its spiritual architecture returns a kind of innocence to the original intent of industry as a superfluous, human beautification of the world. In her photos, the white columns are elaborated with motifs as fine and ornate as lace. The gold mosaics reflect an otherworldly sheen surrounded by medieval seraphim and Arabic calligraphy.

In each of the 12 images displayed at the best lit section of the second floor exhibition in SALT Beyoğlu, the centerpiece is a dress, dyed in a fluorescent aquamarine hue, with its white stitches showing simple, crisscrossed patterns. Within each shape of sewn textile, there are fragments of what look like antique ceramics. It is the garment of a ghostly wanderer whose voice speaks in the silence of stone.

She hovers, casting a shadow. The most important Byzantine structure is empty of people. And the lone adornments of a lost human figure is all the more haunting in the context of individualized, historical revisitation. In one photo, where her head might have proudly gazed into the lens of modernity, she is radiantly backlit by streams of white light filling a room of murals depicting saints below the prophet mired in an earthly struggle.

"I Remained Within Myself" dialogues with apparitions of female human form that emerge from the stone and its cold, timeworn environs. The likeness of a woman from the prophet's family begs upward, her face barely surviving the mosaic of her vanished body. And the spectral dress stands straight, as Moero might in solidarity with her bygone society. Her presence alone is a poem, written in the interventionist, disappearing ink of Börüteçene's artistic whims.

An interior ecology of novel sights

Surmounting the clean steps of SALT Beyoğlu to the second floor exhibition to see "Replica of the Original" begins with a meeting of eyes. A piece by Egyptian artist Iman Issa is lengthily titled, "Material for a sculpture proposed as an alternative to a monument that has become an embarrassment to its people" (2010). Its soft, welcoming presence mirrors the animation of lidless eyes going in and out of focus.

The neo-minimalism of Issa is further pronounced around the corner by Hong Kong artist Pak Sheung Chuen, whose series of photocopied paper sheets, "White Library / A Mind Reaching for Emptiness #9" (2009) tastefully depict the frontal shape and form of a book, or of reading material in frontal view. In perspective, and directness, it is not unlike the photographs of Börüteçene, or the post-materialist paper art of local artist Ezgi Tok from her show in the small Karaköy gallery Pasaj last year.

"Replica of the Original" is foremost a delightful, decorative affair, a feast for the eyes, and as light on the mind as anyone might wish, despite the ideas behind what is seen. It is not at all shallow, but by being firstly visual, compliments the conceptual background. At the same time it is possible to plumb its depths, ideal for the urban geography of SALT Beyoğlu on a drag where lowbrow entertainments are increasingly the order of the day.

Akbıyıkoğlu achieves a profound balance between emptiness in the expansive hall and the displays of art. The works together do not force cerebral or superficial impressions. The show sources a treasury of conceptual practices and research projects, intertwining new multimedia with long-established disciplines. The artworks of Börüteçene are the focal point of the exhibition along with Mark Dion, whose "Dig Culture" (2011) was shown at SALT Galata's inauguration. 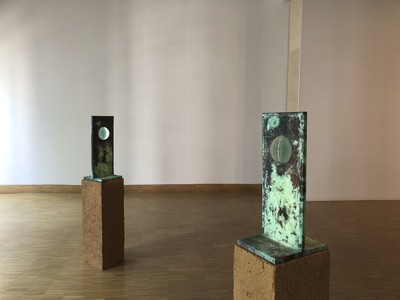 The exhaustive excavation of wares and tools on rustic wooden planks conveys the air of a scientific outdoorsman after a good day in the field. Dion, who is from Massachusetts, is a peculiar transplant, training his intellectual spheres of influence from the Algonquin shore to the Ottoman city. Tin pots and copper spoons are neatly lined beside the familiar glass bottles and gas lamps of a bygone, rustier era.Initially commissioned for the 2011 show, "Scramble for the Past: A Story of Archaeology in the Ottoman Empire, 1753-1914," Dion meticulously resurrects outmoded material culture for his "Dig Culture," which is accompanied by a drawing outlining his visualization. He clearly ordered the presentation of archaeological findings by size, also demonstrating how types of objects are related not only to dimensions, but to the ground, as the lowest rung of objects sits in piled sand.

The sculptural series by Börüteçene, "For Every Sea" is a culmination of the luring wonder that entrances toward the eye of the exhibition. Her work is further supported by the metaphor come to fruition in the found wooden pieces of Nancy Atakan. The transcendental globe of Börüteçene's sculptures recurs suffused with natural light at the end of SALT Beyoğlu where the sun pours in from the broad avenue outside.

There are special discoveries to be had at "Replica of the Original," not unlike that which continues to mystify archaeologists in Turkey, as with the artists of the world who have seen these bewildering, enchanting lands.