The woman on the moon: Semiha Berksoy at the Grand Palais 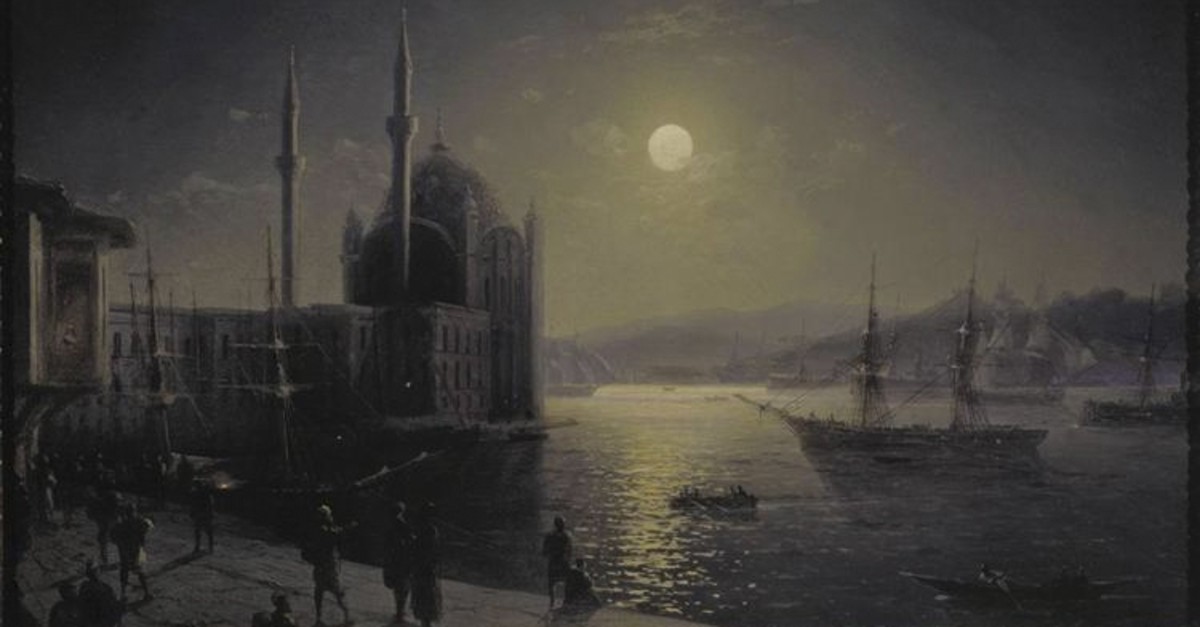 Posthumously, the high dramatic soprano, prima donna, painter, poet, actress and performance artist Semiha Berksoy struts her stuff in Paris as elegantly as she did in the 1930s, as her oil painting, ‘Love under the Moonlight' (1971) will be exhibited at the Grand Palais for ‘The Moon' exhibition until July 22

Semiha Berksoy first went to Paris to play a night club singer in the movie, "In the Streets of Istanbul" (1931), Turkey's first sound film, directed by Muhsin Ertuğrul. At the Paris Opera, the city fired her creative imagination. She saw Richard Wagner's "The Valkyrie", and watched with tears misting her eyes as Frida Leider sang the role of Brünnhilde, crooning the "Magic Fire Music" scene in high soprano around a stage literally ablaze with theatrics carried by music that touched a nerve for it was led in the register of her training.

Berksoy would later perform the lead role in Turkey's first professional opera production, "Tosca" (1941). Atatürk found her an exceptional talent, to be primed for a European education. She enlightened "the Father of the Turks" with the ascent of her voice and the whimsies of her persona during a backstage republican soiree. She studied at the Music Academy of Berlin, graduating in 1939 after an encounter with Hitler Youth protesting her as prima donna in a performance honoring Richard Strauss. The local conductor defended her artistry, and won.

As her art suggests, she was moved by profound moral compunction, leading her to confront the traditional mores of her beloved Turkish nation, both aesthetically and thematically, throughout her long and mythical path from stage performer to visual artist. In 1910, Berksoy was born on the shores of the Bosporus in Istanbul's bucolic Asian side where ancient plane trees shaded storytellers, among them her poet of a father, and painter of a mother. She lived well into her 90s, prolific as she was infinite.

The lunar romance of Berksoy

The boundlessness of her unframed art motivated her return to a sweeping exhibition at the Grand Palais, in the mammoth baroque building of steel, stone and glass in the heart of the City of Lights. Built in 1900 on the occasion of the Universal Exhibition, its halls of iron scrolls and columns of green porphyry launched the wild Fauvism movement five years after opening, when the likes of Henri Matisse and Georges Braque stunned conservative society with audacious palettes. The voluptuous architecture was made to house art, both monumental and decorative.

The art of Berksoy enjoys a carte blanche welcome for eternity in Paris, like a perennial flower that, planted once, blooms every spring. In 1971, she painted "Love under the Moonlight" with oil on an artificial isorel masonite wood, giving her post-cubistic figures a curvilinear backdrop of cascading metallic green. Manatee-like, the finned beings are swathed in currents of liquid dyed as with the living hues of waving sea vegetables. Speckled with erasures of white in its corners, oxygen breaks through the submerged paradise, centered by a pair of enigmas. 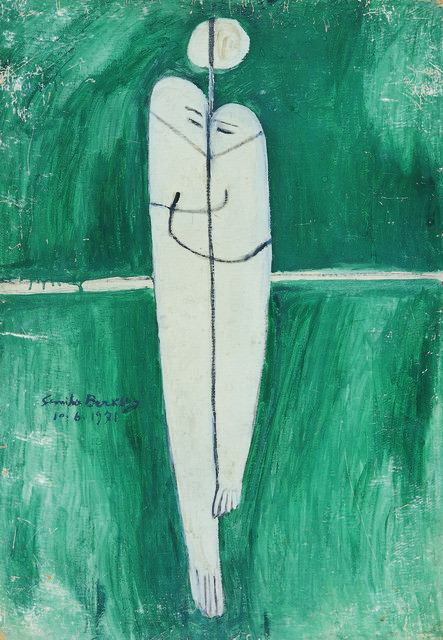 "Love under the Moonlight" (1971) by Semiha Berksoy, oil on isorel wood panel, courtesy of Galerist in Istanbul, and Vigo Gallery in London.

The vertical geometry of the piece touches on the nature of bodily portrayal, of paint inhabiting singular forms that find symmetrical union with their opposites. A shorter and taller frame are locked in an embrace as otherworldly as it is tender. There is something consistently moving to recognizable human expression in creatures that are familiar only by shared emotion, advancing universal humanism throughout the untold variations of creation. With delicate traces of line, she captures the beauty of an embrace, a kiss.

The alien lovers of Berksoy's imagination are extraterrestrials of a lunar order, cocooned to the lips, exposing anthropoid heads slit with eyes that seem somehow magically sleepy, adrift in the fog of a flowing expanse, as earth tones stream below them. Yet, themselves void of color, as with the split disk of white above them, they are of a celestial ilk. Descending halfway below a pale line of smudged paint, they are lowered as by a line cast from the dark side of the moon, radiantly enfolded in their intimacy over the darkening ocean green under which they surface.

"Love under the Moonlight" hangs on a wall nearly halfway through the stunning collections that mark the 50th anniversary since NASA orchestrated the inaugural lunar landing in 1969. The personal effects of the men who pioneered the Apollo 11 mission are lit behind glass, introducing the show beside iconic documentary space photos before revealing a smorgasbord of historic and contemporary artistic and scientific interpretations that wind back the clock from the space race to earlier preconceptions of the moon and its significance for earthlings.

With its dedication to transcultural epiphanies, the prestigious duo Philippe Malgouyres, chief curator at the Louvre, and Alexia Fabre, of the MAC VAL, represented a range of geographies and civilizations that have set their sights on the moon since the dawn of humanity. Not far from the Berksoy is an Ottoman lunar calendar from the 18th century, with a description clarifying how, for Muslims, there are, on paper, ten less days a year. Two lengths of scrolled gilt parchment show the meticulous, calligraphic observations of the moon in kaleidoscopic detail.

In 1910, the orientalist painter Etienne Dinet steered his ethnographic gaze, from which he gleaned his famously exotic subjects across the desert mountains of North Africa, on a chorus of turbaned men squinting into the gaining light for a sign of Ramadan. A lone boy is splayed out over the rocks, fasting alongside his elders whose eyes peer hard into the darkening sky. The curators failed to identify Dinet in full. In Algeria, he converted to Islam, changed his name to Nasr'Eddine, taking the pilgrimage to the Hajj in his final year.

The last of seven galleries at the Grand Palais furnished for "The Moon" exhibition is subtitled, "An Invitation to Beauty." It features paintings and sculptures that romanticize the charm of the moon as its light lands on earth every night, sparking a mirrored mysticism that is, in the eyes of artists, no less miraculous and extraordinary than the lunar landing itself. The idea of another world has its parallel when retracing lines of sight that once prevailed between continents, when to look east was to pierce a veil of darkness as absolute as the night sky.

Known for his mastery of seascapes, Ivan Aivazovsky, the 19th century Russian-American painter in the Romantic tradition, heard his muse in the 10th canto of "Les Orientales" (1829) by Victor Hugo. His painting, "Clair de lune sur le Bosphore, 1894," is almost directly adapted from the language of Hugo, whose poetry sings liltingly of a sultana leaning into breezes wafting over the lapping shores of the strait, as she listens to the silent mosque of Ortaköy, and plays her guitar. But in his oils, the moon is an astronomical inferno that beats down like time on a busy port city.

Fifty years on, humanity's intimate brush with its natural satellite has not dashed supernal visions of the moon as that ungraspable entity, like the unearthly love of Berksoy's painting. And in the attempt to make its magic visible, its luminosity enraptures, causing those under its sway to invent, create and finally fall for the undying passion that its mysteries possess.