The collagist of time: Metehan Özcan at Versus Art Project 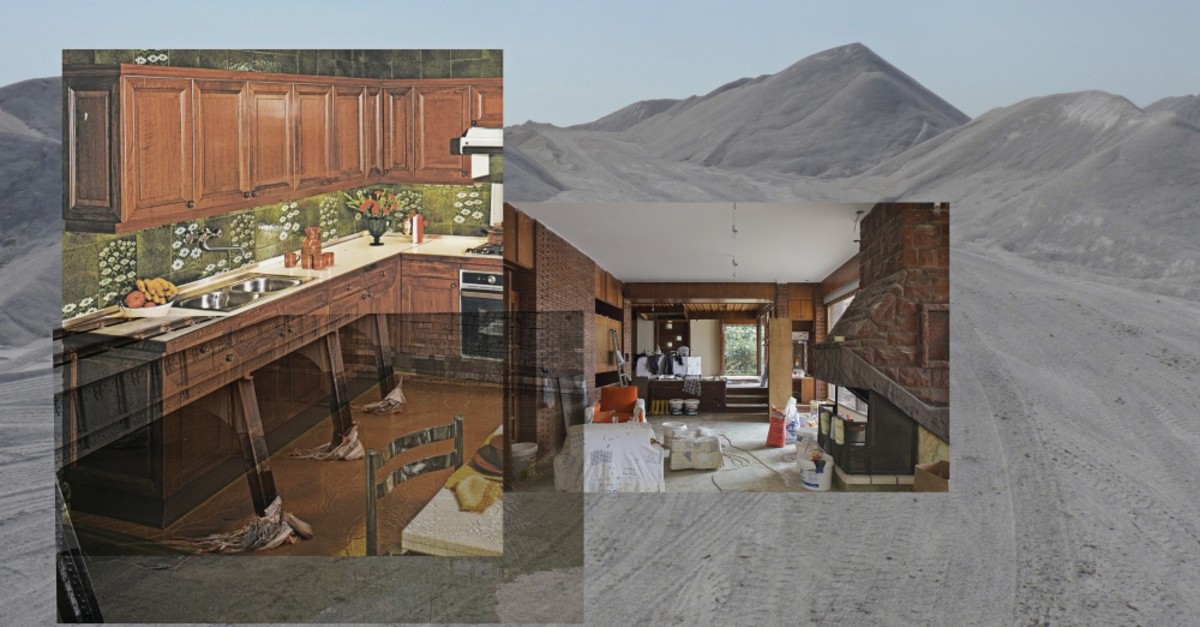 Hosting the artist's simple, direct style of architectural lines, Versus Art Project presents ‘Dekor,' the third solo exhibition of İzmir-based art photographer Metehan Özcan, encompassing practices he has developed throughout his career, from the exploration of abandoned spaces to the overlapping of found photographs

As his formal education is not in fine arts but communication and interior design, Metehan Özcan is a refreshing figure in Turkey's cultural landscape. His artwork does not engage through a dense, and ideological front of concepts cloaked in references to philosophy, criticism and aesthetics. Nonetheless, the technical grace and spatial harmony of his works exemplify a suite of visual dialogues on the relationship between form and time.

With photography as his main medium, Özcan consciously interprets the reproductive precedence of its saturation in contemporary life. In that respect, his curatorial eye wanders back to the architectural and communal history of his country. His collages, mostly gleaned from his previous show at the disbanded Tophane gallery Elipsis are interlaced with people, rooms and buildings, toward a kind of silent noir storyboard of a plastic imagination.

Before his first solo show in 2010, at Operation Room, a gallery of the American Hospital in Istanbul, he was photographing houses on the Asian side of the Bosporus built between the 1930s and the '80s, Turkey's modernist era, without architectural knowledge, to document real estate. He began posting his photos on a modest website, sharing them with university colleagues and soon enjoyed a market in architectural publications, which initiated him in the art world. 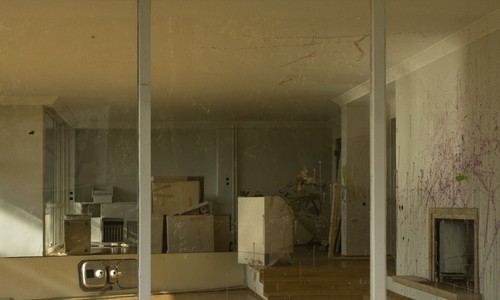 With a promising art career since participating in the Venice Architecture Biennial in 2014, the works at "Dekor" are almost like a retrospective. His encyclopedic foray, "Recipes 24" (2014), which appeared in the Turkish pavilion in Venice, explore an intriguing, counterintuitive espionage of interiorized perspectives. But for "Dekor," he is still exhibiting his favorite photograph, "Untitled 20" (2008) from his first show.

"Untitled 20" (2008) is framed within itself by two white window panes. From the outside looking in, Özcan delved into his training as an interior designer to perfect an eye on an otherwise derelict domestic environment, complete with an upturned kitchen sink and other fixtures of transition. Part of the glass is stained with streaks of purple, contrasting the rectangular lines of the boxed and walled former home with an affirming splash of movement.

A still eye in motion

Born in 1975 in Istanbul, later studying in Ankara and now living in İzmir, Özcan has a broad understanding of the art field, not only from the last 10 years, pursuing his career as a leading photographer, but by virtue of his profession he is a keen observer. He is also among a generation of workers in Turkey's cultural sector who has seen groundswells of social change. His art exhibitions testify to the inbuilt amnesia of local historiography and the challenges of remembering.

The perceptive fieldwork of Özcan is also a visual comment on the contrast between instantaneous photographic renderings of artificial space and the long drawn-out passage of culturally defined time, which simultaneously manifests in the kind of fixed images that Özcan produces.

"In 2010, the gallery system was different. There were more gallery openings and more exhibitions. Now, there are lots of independent groups and spaces," said Özcan. "With the increase of social media, photography is huge. In the early 2000s, before Facebook, I opened an account on Flickr. Urban decay is a major focus for the U.S. and Eastern Europe. I thought the stories of the buildings and the tenants would add something other than the image itself."

In terms of media, "Dekor" uniquely differs from Metehan's former exhibitions in its use of text. While he displays photos from "Vacuum" (2010), his show at Operation Room, and collages from "Illustrated Information" (2013), the introduction of text into his oeuvre has the effect of reopening the historical space he portrays through the lenses of his various cameras, and which he also fishes out of vintage collections of unappreciated negatives, postcards and other ephemera.

"Since we became image-based readers, our attention is full of billions of images," said Özcan. "We consume them in seconds and look at another. It is hard for me to share something that I'm also fed up with already. I decided to find unrelated photos to tell a story, or photos of the same building from a different era, or a version pictured by tenants who have an actual memory of the place, to make a broader conversation"

His piece "City Guide" (2019) is essentially eight strips of paper inked with the names of professions from an old directory in İzmir, long before the internet changed the way public information is shared and known. It includes some occupations, like a hay farmer, which are all but lost to İzmir's history of urbanization as Turkey's third-largest city of over 4 million inhabitants on the Aegean coast.

In a three-minute video titled "Dekor 6" that Özcan calls the "clue of the exhibition," he explores recurring motifs that run through his show at Versus Art Project. The key image, moving in the video, and later still in his altered Dekor series of photographs, is that of a bridge over a watercourse in which the refuse of the city's material overburden are caught on the legs of the metal structure.

"1.2.3. Dekor" (2019) presents a triad of upholstered wooden chairs reminiscent of late 20th century Turkish domesticity, only he juxtaposes waterlogged cuts of cardboard and broken furniture pressed helplessly by a rushing stream against the structure's vertical beams onto the legs of the chairs with a seamless ingenuity. The subtle quality of his digital double exposures collocate interiors with exteriors.

His is an artful interrogation of residential psychology as an ecology of human habitation in which agricultural-based civilizations visibly separate homes from the land. The eyesore skyscraper condominium escalates the modernist rift from nature with spectacular flagrance. Özcan curated a found photograph of an early high-rise in Turkey for his wall-panel of 18 visuals also titled, "City Guide" (2019), with text from the alphabetical pagination of his archaic directory.

"Dekor" invites further investigation into one of the most enduring questions in art history, namely the function of art. Based on the title of the show alone, "Dekor" connotes the argument that art is best purposed for mere decoration, or more exactly, that it expresses its Latin root "decorum," meaning good taste. "Dekor 4" (2019) reexamines these distinctions with its exterior of an open-pit mine backgrounding a catalogue advert of a kitchen that Özcan flooded.

"'Dekor' comes from the idea of the realness of the city. It is always designed by someone, all of the landscape, buildings, trees. We think and consume that as a reality of our time, or the reality of that geography, but mostly they are not," said Özcan. "It is a kind of decoration by the municipality for the sake of the public. In the Aegean coast, there are palm trees. But those trees are from somewhere else. In İzmir, that's the case. Now, it is how the city is remembered."