Turkish designer opens up to world with painting exhibition in Germany 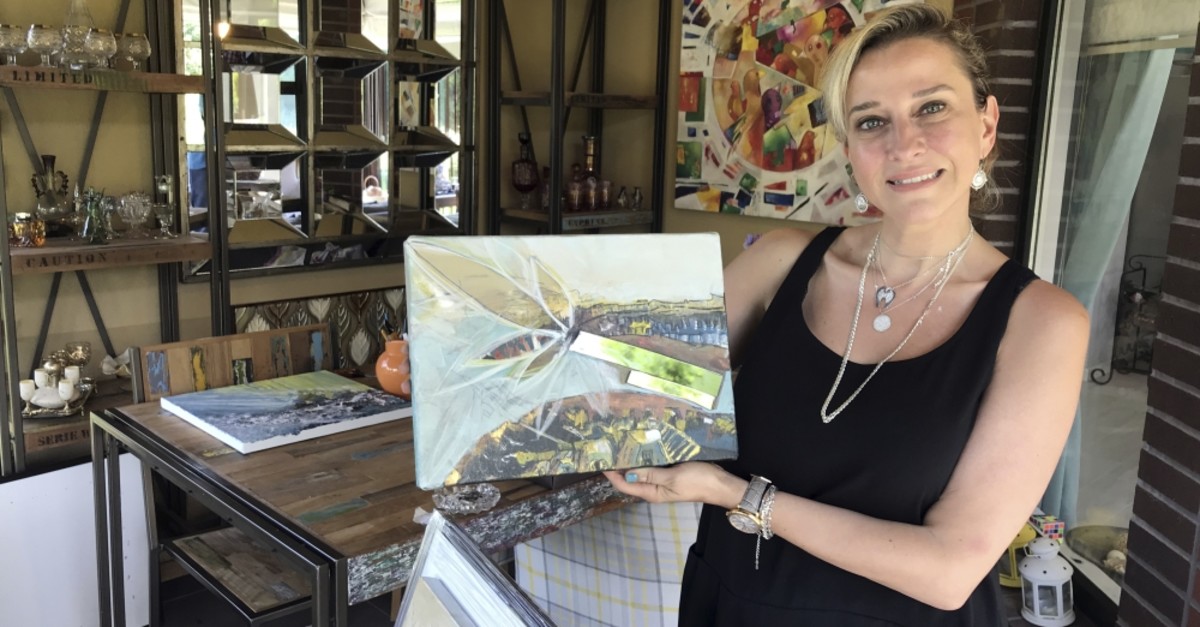 Fashion designer Sanem Atalay started to paint as a hobby a year and a half ago to cope with her stress during the treatment her husband received after suffering a stroke in Kocaeli province. Recently, her art therapy turned into fame, and her artwork will be featured in a four-day exhibition in Germany.

Atalay left her job at an Italian company to care for her husband. Married with two children, she began to paint in a small workshop set up in her house. She has been selling her abstract paintings for for up to 600 euros (around $670) via the internet abroad.

Granted with an honorary award at a competition held by an art magazine in Berlin, Atalay received an invitation from the Living Gallery Berlin in Germany to exhibit her works. Atalay is very excited about the opening of her first solo exhibition, scheduled to run between Aug. 9 and 12.

A degree holder of English language and literature, Atalay, 43, told Anadolu Agency (AA) that she has two sons aged 10 and 20 and worked as a fashion and design representative at an Italian company for 22 years; therefore, she is familiar with color and design.

Noting that her husband, Serdar Atalay, 50, got a job offer from Germany nearly 1.5 years ago, and their family moved to Berlin, Sanem Atalay said: "My husband had hemiplegia because of a cerebral hemorrhage six months later. He stayed in the hospital for 18 days, the first five of which were in intensive care. Then, intense physical therapy started. Our families could not come as they could not get visas immediately. Loneliness was a problem for me. I thought I could overcome this period because I have my sons. Sometimes, the patient's relatives get more worn out than the patients. Because of these feelings, I bought paints and brushes for my own therapy. The materials were the wrong ones as I was so far from this field. I began painting in our kitchen. Then, I established a workshop in our house. People started to like my paintings. It was so encouraging for me. I exhibited my paintings at art bazaars. People were buying my paintings there. It was not something material but spiritual. It stimulated me."

'Storms inside me in paint'

Atalay stated that she did not receive formal education for painting but loves abstract art. "I felt close to abstract painting more than descriptive and figurative paintings. In hard times, my husband needed support and care for a while. He recovered so fast, miraculously. I reflected the storms inside me in my paintings," she added.

Reiterating that Vasiliy Wassilyevich Kandinsky, the father of abstract painting, believes that colors provoke emotions, Atalay said painting is like rehabilitation for her. She had never considered painting as an occupation in the beginning. It was just an activity to feel better. Highlighting that colors are good for her soul, she continued: "I felt happy when I sold my first painting. I put my paintings on tables in an art bazaar in Berlin. An Italian couple came and admired a small painting of mine. It was their daughter's birthday, and they bought my painting as a birthday gift for her. I cannot describe my pleasure and happiness. I sold it but then wished I had gifted it to them."

Mentioning that she sold eight paintings at the art bazaars in Berlin, Atalay said that her 12 works have sold for between 500 euros and 600 euros in the last three months.

Stating she will open her first exhibition in Berlin, Atalay expressed that not everyone can open an exhibition in a gallery. She explained: "If they believe you are successful and will not damage their prestige, they open their doors to you. I received an invitation from the Living Gallery Berlin to open an exhibition. They liked my paintings a lot and found them interesting. It will open on Aug. 9. The exhibition, which I will open with painter Cenan Özkan, will continue for four days. My 35 works will be on display covering three different themes at the exhibition. When they started calling me 'a newly discovered talent,' the Russian press also wanted to have an interview with me."

Atalay emphasized that she entered a competition for an art magazine in Berlin and received an honorary award for fourth place. She says she will continue to paint and improve herself. She also extended invitations to the Turkish ambassador to Berlin and all art lovers to visit her exhibition.