Joys and pleasures of art revisited in group exhibition 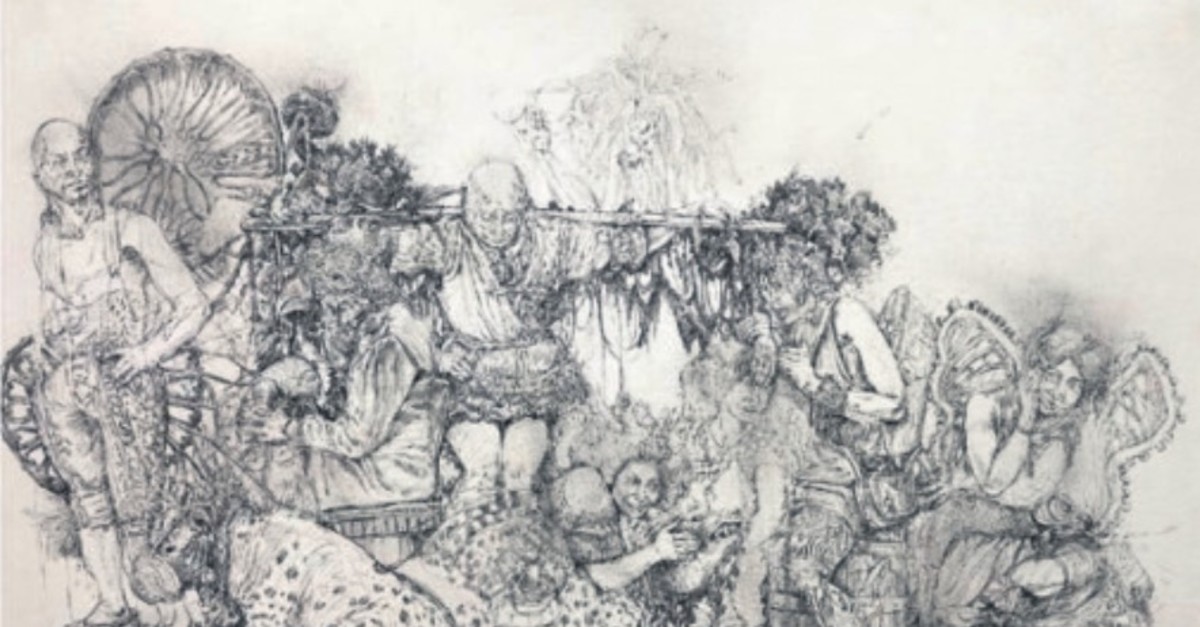 Galeri 77 invites culture enthusiasts to experience the familiar joy of art once again with its colorful selection of the previous season's highlighted exhibitions, including never-before-seen works from some of the artists

Galeri 77 is hosting as latest group exhibition, titled "Down Memory Lane..." that looks to recreate the memorable moments of the near-past and focuses on rediscovering the highlights of its previous season's shows.

The exhibition is made up of two main sections; the first section in which oil on canvas and acrylic works are placed, and a second part comprising of works that are medium or small format, mixed media on paper and various limited edition works. "Down Memory Lane..." can be visited until Aug. 24 at the gallery's space in Istanbul's Karaköy district.

At first sight, the audience is greeted by Zeynep Akgün's female-centered works, in which women are depicted in a realistic style, sometimes in a state of melancholy and vulnerability and at other times self-confident and brave. Sedat Girgin's two previously displayed limited edition works, "Civan" and "Spring" are being accompanied by brand new works coming straight from artist's trademark vivacious universe, filled with characters that are unique, playful and at the same time seemingly stuck in a bitter reality. With an equally unique approach of bending every basic rule and principle of art theory, neo-pop artist Vav Hakobyan's unique works of mixed media on paper, including many-colored objects and bizarre, hybrid crossbreeds, invites visitors to rediscover the rich imagination of the artist. With natural patterns in places and abstract geometric themes reminiscent of the very beginning of time, Mesut Karakış shows us new illusions with his unique works comprised of depth, the effect of space-fullness, transparent transitions and multi-colorfulness, in his own method of "erasure".

Drawing much interest and continuing to surprise the audience with absurd characters and a fantastic color palette, Daron Mouradian once again sets us on an epic journey, this time with a selection from his previous artworks an elaborate collection of artistic reproduction prints, autographed on paper by the artist himself. Focusing on relaying different states of mind with colors and forms in his artworks that are mainly inspired by his personal life, Cem Mumcu allows the viewer to confront and stand face to face with feelings that are common to every one of us. Arshak Sarkissian's esoteric stories deriving from his observations upon the relationship between animals, nature and humans that he relays with amazing depictions by ink on paper, crack open the gates of equally amazing worlds. Sayat Uşaklıgil continues to surprise the audience, with his timeless and bizarre compositions inspired by photos from the '30s and '50s, when the idea of "happy people" was first imposed on the earth, inviting us to indulge in the laughter-filled, happy-go-lucky moments of a merry crowd.

Various topics, styles and inspirations in one show

Zeynep Akgün often puts the female in focus of the human condition. In Akgün's paintings, the female figure is encircled with enormous sized knots, ribbons and all sorts of shiny ornaments, alluring us with their cheap luster. These flashy items are there as elements that restrict the freedom of movement for the women, and are highly disturbing with their menacing existence. The woman seems like almost awakening from this semiconscious condition, to make her intuitions into action. Artist's forms in her compositions are situated in an empty space on the canvas per tradition dictates all the while leaving the more real proportions behind them, benefiting thus from the limitless flexibility of contemporary sense of art. 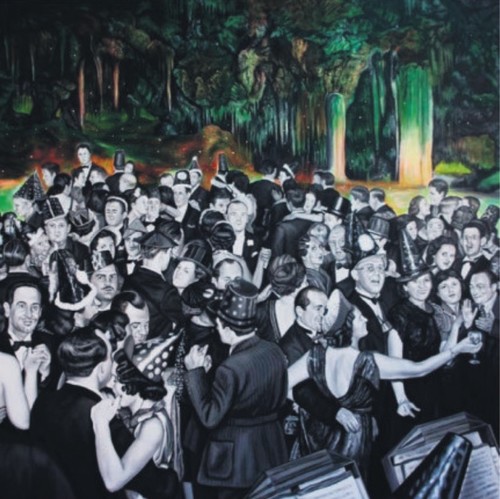 Sedat Girgin has been making the illustrations for various publications. Treating his characters in a unique, playful but also bittersweet reality by creating an original world. Girgin is an artist who likes to make a point of drawing as he feels like, who loves playing around with forms and who believes that he can relay more directly the emotions by deforming the figures he draws as much as he can. Just like a rough sea reviving a much stronger and tougher feeling than a calm one.

Mesut Karakış's pieces show highly dynamic matrices of lines, thin shapes, complex textures and appealing bride colors. The artist uses mainly warm colors, which he contrasts with black and white in order to support the aesthetic power of his paintings. Like lava-streams of a volcano, in Karakış' paintings, red and orange appear frequently in a complex net of swirling stripes and multiple forms. The strong qualities of the colors find a nice counterbalance in the dynamic design of the composition. Together, they form abstract images that have both depth and powerful momentum.

A medical school graduate, artist Cem Mumcu specialized in psychiatry. His research on psychiatry focuses on artistic creativity and mood. He gave lectures on Artistic Creativity and Art Psychology while he gives lectures on communication to some of the biggest companies in Turkey. He also wrote in different genres such as poetry, stories, novels, essays and critics.

Composing artworks in figurative, utopian, surreal frames within context of time, extent and space, Sayat Uşaklıgil seeks to create ironic integrities in his body of work. Made with acrylic paint, his paintings showcase alternative and multi-dimensional realities in a figurative density and a spatial depth. Portraying innocent, merry figures and laughing, smiling, often fun moments; the artist creates a synthesis based on absolute reality with its surroundings, but also on nostalgia with figures in a collocation of the past and today. The artist creates striking harmonies utilizing monochrome and array of bright colors. He opts for Baroque in its dynamism and vivid colors and shapes in motion with flashy and flamboyant colors of his own. In this way the joyous states and active movements of the images on the canvas are further invigorated and blended in a coherence of color and form.

An Armenian artist from Yerevan, Vav Hakobyan took several courses in sculpture, painting, woodcraft, ceramics and graphical painting, as well as carpet weaving. Between 2000 and 2002 he took part in many sculpture symposiums along with famous Armenian sculptors. Vav Hakobyan's artworks can be found in private collections and public museums throughout the world, in countries such as Armenia, Russia, China, France, Germany, Spain, Canada, Lebanon, Turkey, the U.S. and others.

Famous Armenian painter Daron Mouradian is also taking part in the group show. Mouradian's works are inspired by Armenian culture, combining the civilizations of the East and the West, and including memories of the Middle Ages. Mouradian's world of fantasy is an ever-changing environment where the Bible and mythology play a major role. He leads us to make an in-depth self-analysis, in search of our own roots, to be able to live the future with greater serenity. By animating every single detail on the canvas, he represents an illusion laden with irony and humor, appealing to our imagination; thus, enabling the re-occurrence of forgotten dreams in our consciousness. While the colors he uses reanimate the times of fairy tales, by exposing the tripe of puissance (power) and the absurdity of violence, he leaves us with a story of violence emerging from this marvelous fairy tale.

Arshak Sarkissian's art is all about contemporary man, the complexities and controversies that surround him as well as his metaphysical peculiarities as refracted through the artist's imagination. Convinced that the world is a pluralistic place that is not just limited to physical reality and in which many worlds - directly inspired by the arts and literature - are just as factual, his world is informed by the Magic Realism of South America as well as Asiatic Shamanistic traditions. Sarkissian illustrates the supernatural aspects of everyday life in his art. He constantly explores the human personality with its multi-dimensional, multi-layered facets. His drawings are peopled with self-conscious entities that seem to be in psychological experiments with themselves in a process of self-discovery and evolution. It is through such experiments that the personality gives way to the genesis of either a monstrous abnormality or a hybrid of fauna or flora, until human and inhuman ultimately become indistinguishable.