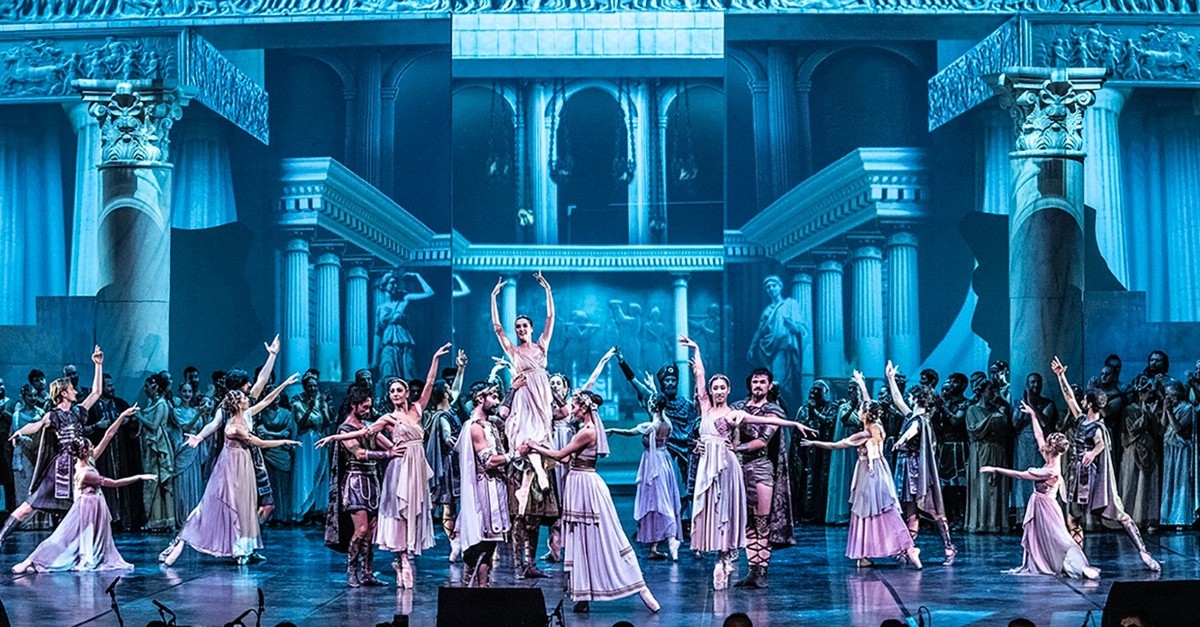 Artists from the General Directorate of the State Opera and Ballet have successfully represented Turkish opera and ballet in many countries including Russia, Algeria, Germany, Japan, Italy and Thailand at events held in 2018-2019

In 2018 and 2019, General Directorate of State Opera and Ballet (DOB) artists brought together both classic and local works with the audience at several events around the world.

In these countries, DOB artists performed classic works including "La Traviata," "Zorba," "Madama Butterfly," "Carmen" and "Tosca," and various other works such as "Batı'dan Doğu'ya Türk Müzik Yolculuğu" ("Turkish Music Journey from West to East") and "Piri Reis" and "Troy," which also consist of local elements.

As part of DOB's activities abroad in 2018, Murat Karahan performed as a soloist in Verdi's "La Traviata" and Puccini's "Manon Lescaut," staged by the State Academic Bolshoi Theater of Russia, as well as Verdi's "Il Trovatore," staged by the Deutsche Oper Berlin.

Serkan Kocadere, a soloist from Ankara DOB, performed a concert in the Kyrgyz capital of Bishkek, while another soloist Ayhan Uştuk from Ankara DOB and pianist Esra Poyrazoğlu Alpan performed at the event held at the Algerian Museum of Fine Arts by the Turkish Embassy in Algeria.

İzmir DOB displayed the ballet named "Dansın Rengi" ("The Color of the Dance") at "the 9th International Festival of Modern Dances Culture" in Algeria and at the "1st International Ballet Art Festival" held at the Uzbek capital of Tashkent.

In the events held for 2018 Turkey Tourism Year in China, the Allegra Ensemble, consisting of female artists from the DOB, met with the Chinese audience with a wide repertoire from Anatolian folk songs to musicals, tango and jazz. Moreover, over 1,000 Chinese youth were introduced to the Turkish culture at the stage program entitled, "Allegra Ensemble & Miniatures: A Musical Roadshow from Turkey" held at Hong Kong Polytechnic University (PolyU).

At the opening of the "16th International Northern Cyprus Music Festival," artists from Ankara DOB staged "Zorba" composed by Mikis Theodorakis and choreographed by Lorca Massine.

Ankara and Antalya DOB artists met with the Azerbaijanis at "The Uzeyir Hajibeyov International Music Festival" held in the Azeri capital of Baku and at the concerts organized on the occasion of the declaration of Nakhchivan as the capital of Islamic culture for 2018.

Karahan took part as a soloist at the closing event of 2018 Turkey Tourism Year in China, taking the audience on a journey in Turkish music. At the "Turkish Music's Journey from West to East" concert, Karahan was accompanied by DOB artists and the orchestra of the General Directorate of Fine Arts.

Meanwhile, Samsun State Opera and Ballet artists performed the "Piri Reis" ballet at the Thai National Theater as part of the 2018 Turkey-Thailand Year of Culture.

Karahan performed as Pinkerton in Puccini's "Madama Butterfly" opera at the Teatro Regio Torino in Italy earlier this year.

In the 2019: The Year of Turkish Culture in Japan, the exhibition "Treasures and Tradition of Tulips in the Ottoman Empire" was inaugurated by the Allegra Ensemble with a repertoire consisting of musicals, tango, jazz and world music.

The opening event of the declaration of 2019 as the Year of Turkey-Russia Mutual Culture and Tourism was held at the Bolshoi Theater in Moscow. The 290-member DOB team performed the Turkish opera "Troy."

At the concert by Japanese maestro Seiji Mukaiyama, the composer of "Friendship" dedicated to the sinking of the Ottoman Frigate Ertuğrul, İzmir DOB's soprano Sibel Nazlı Alptekin took the stage in company with Mersin DOB's orchestra.

Meanwhile, Karahan performed at the Verona Opera Festival at Italia's Arena di Verona, one of the oldest and best-preserved amphitheaters in the world.

Karahan performed "Radames" from the "Aida" opera and "Manrico" for the "Il Trovatore" opera.

He will meet with the audience today with a performance of "Don Jose" from the classic opera "Carmen" and will perform "Cavaradossi" from Puccini's "Tosca" opera on Aug. 29 and Sept. 6.