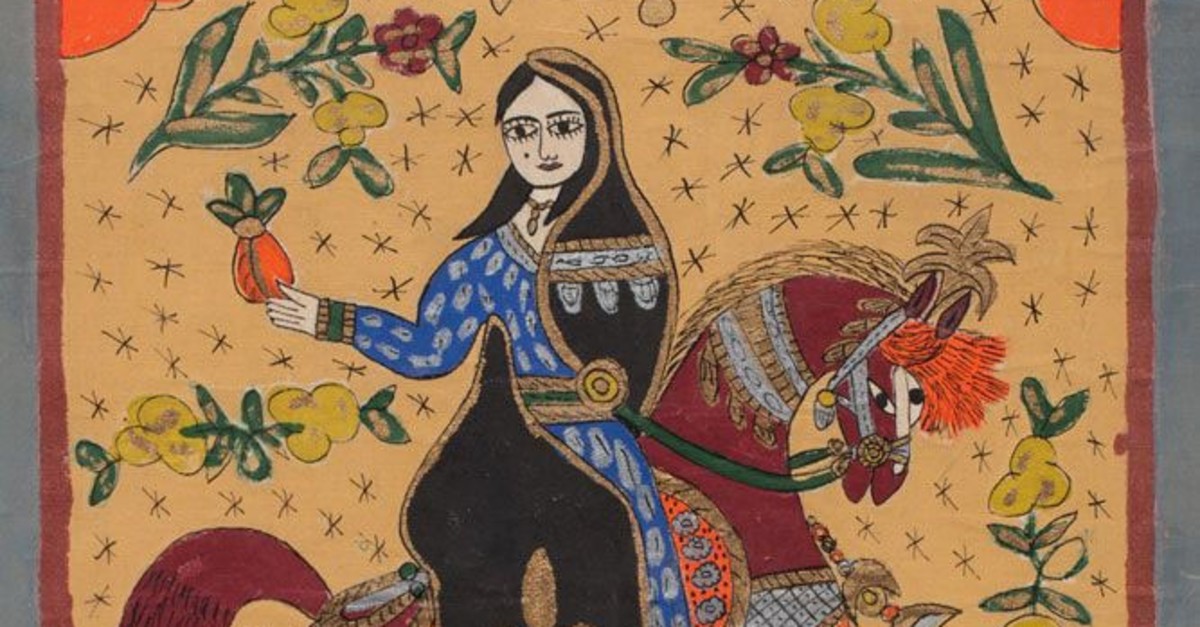 Until Sept. 2, Marseille's flagship art institution Mucem (the Museum of European and Mediterranean Civilizations) is exhibiting a retrospective of polymath Jean Dubuffet, who founded the Art Brut movement to hail unschooled outsiders. Meanwhile in Istanbul the Syrian-run Kelimat Gallery is opening its Art Brut museum

By the sandstone docks of Marseille, the all-seeing spire of the Neo-Byzantine and Romanesque basilica of Notre-Dame de la Garde shoots upward from the steep peak of the city's high ground. Its orientalist gothic facade keeps watch over the spectacularly renovated 17th century Fort Saint-Jean.

Of burnished metal and overgrown rock, the walls of the modernized complex screams of battles and prisoners, revolutionaries and pirates. Its haunting, cold interior is peaked with a blunt lighthouse rising above herbaceous borders and bridged verandas. Sailboats slip beneath its gray waters, escaping outward to face the open horizon of cresting waves and cloudy sky.

Inside, the Museum of European and Mediterranean Civilizations (Mucem) exhibits the life's work of French painter and sculptor Jean Dubuffet, alongside those he inspired. Few have questioned the widely held and generally uncriticized belief that culture and art are naturally akin more than Dubuffet, one of the 20th century's most prolific artists.

Linked by a footbridge, the interlaced metallic exterior of the J4 building annex at Mucem mirrors the waving contours of the seascape. In one of its grand halls, "Jean Dubuffet, a barbarian in Europe," the retrospective's title, comprises 290 works and objects from collections throughout Europe. It opens with a collage of 28 acrylics, "Le Dechiffreur" ("The Decoder") (1977).

Within its contiguous blot of rudimentary forms, scrawled strokes of distended frenetics and quixotic schemes of darkened psychedelia, there is a large-headed figure holding its center. Encapsulated by a rounded rectangular frame, the human likeness embodies the "The Decoder," surrounded by a sprawl of unreason. 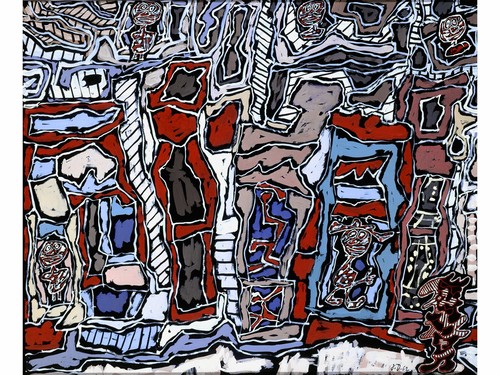 Dubuffet was an iconoclast in the complete sense of the word's history as a Greek religious term for the breaking of idols. His artwork was not merely decorative, or even art as such, but more critical investigations to unmask Western acculturation, foregrounding the invisible and unknown beneath its thin facade.

An emblematic illustration of Dubuffet's overarching Art Brut concepts is clear in one of his early paintings, an oil on canvas titled, "Petit Sergent-Major" (1943). It is important to note the date of the piece, as it indicates the crystallization of his philosophical approach to art as the right and dignity of the common man. "Petit Sergent-Major" denudes militarism, literally, with an expressionist bent

From Brute to Brut

Born in 1901 in Le Havre, Dubuffet arguably formed the ideas that still galvanize art world politics among the intellectual heyday of Europe's interwar period. The anti-establishment movements of Dada, Cubism, Surrealism broke the surf of conservatism in art in an attempt to counter the Western narrative of almighty reason.

It appears plausible that only Art Brut survived the historical tokenism that has diminished the relevance of other early 20th century schools in art history. Their subversions reacted to the special challenges of the era, now long outmoded.

The ongoing spread of Art Brut reinforces its core principles against cultural domination and the institutionalization of art. Dubuffet had peerless foresight. He delivered his evergreen message at a conference for painters as early as 1945, stating: "Art is a field that is open to everyone and does not require particular gifts, or prior education or instruction."

His experience in Paris had a direct influence. As an undistinguished art student and aspiring bohemian of the late 1910s, Dubuffet did not feel he belonged in the inner circles of Montparnasse's storied studios and salons. It was only after turning 40 when he devoted himself exclusively to art, having established a profitable wine-making business.

To Dubuffet, the definition of art as culture was at best limiting and at worst asphyxiating. He explained as such in his slim book, "Asphyxiating Culture" (1968). He wrote: "The loss of consciousness of the world generates monstrous deformations and grotesque denaturations." His tireless dedication to craft as inseparable from his pedagogy has rippled through time and particularly across the Mediterranean in uniquely diverse cities like Marseille and Istanbul.

Adnan Alahmad, an Aleppo transplant, has visions of Arab and Turkish unity through art. His cultural activism as the director of Kelimat Gallery has brought solo and group exhibitions to Istanbul with an exacting and comprehensive regional focus, encompassing everyone from the women sculptors of Iraq's multidisciplinary collectives to painters whose canvases are heavy with the gravel of Syrian battlefields.

Alahmad has a weakness for an unsung Art Brut pioneer named Esma Ekiz. She was a local Turkish woman from Kuzguncuk, a village-like neighborhood on the Bosporus where Kelimat Gallery was located before moving to the breezy, arboreal highland of Koşuyolu, overlooking the Sea of Marmara. Ekiz is a late unknown. Her radical productivity is mystifying, all the more so when considering her complete lack of training, and outsider status despite being from a large family of artists.

Kelimat Gallery's new, unrivaled museum for Art Brut enthusiasts in Istanbul will be tasked to curate over 250 of her collected works, ranging through pointillism and abstraction, landscape and portraiture, all in her unmistakably naive style. A second floor will revolve around Ekrem Zave, a painter who never left his Syrian homeland of Qamishli, where his otherworldly figures are lathered onto found materials, like wallpaper, stripped from his war-torn home.

Finally, the third floor of the Art Brut museum at Kelimat Gallery will be dedicated to the Turkish watercolorist and action painter Zeynel Erdoğan, who recently added new large-scale canvases to Alahmad's museum catalogue in the past few months. Scattered over brushes of pale blues smudged seamlessly into delicate swathes of green, his black drip dialogues with a backdrop that, in contrast, retains, and even accents the pure emptiness of its beginning and end.

Interwoven throughout the multilevel trio of spotlighted works by Ekiz, Zave and Erdoğan, the Art Brut museum at Kelimat Gallery will curate similarly under-appreciated diamonds in the relatively untouched rough of unschooled artists from the reaches of the eastern Mediterranean. Alahmad is a steadfast independent scholar and singular collector of Turkish and Arab artists who have largely gone under the mainstream radar. He is conversant with names remote from the contemporary Western canon, like the illiterate painter Abu Sabhiletinawi, an Arab master of the Art Brut tradition whose tapestry-like figurative epics drew from ancient poetic sagas such as "Anta" and "Abla."

The pre-Islamic fable was also a muse for another Damascene painter of the Art Brut persuasion, Naji Obeid who passed away in July at 101 years of age. Alahmad has some of his most prized works of ink on canvas. Dating from the 1960s, they are medieval fantasies of errant knighthood celebrating the universality of romance, art, beauty and humanity.