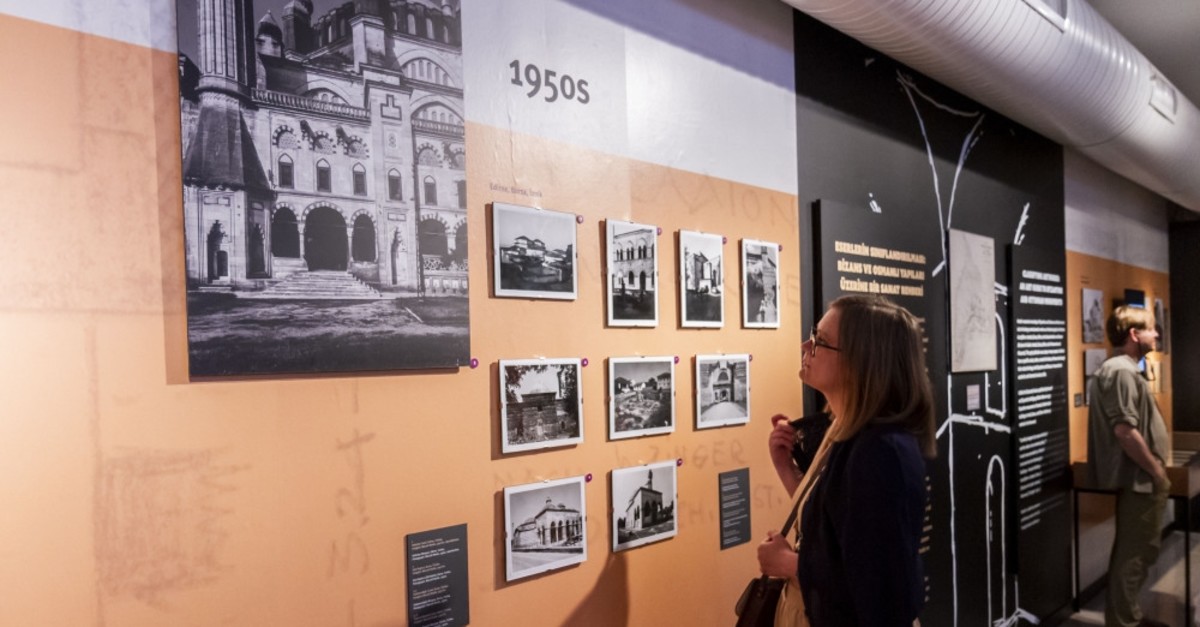 The exhibition, which will be open until Dec. 1, displays the systematic working method of art historian Marcell Restle, one of the leading researchers of his field, and the rich archive of the researcher who dedicated his life to examining the cultural assets belonging to the late antiquity, Byzantine, Seljuk and Ottoman periods in Anatolia.

A majority of the documents and materials donated from Marcell Restle's private collection were donated to the DiFab (Digital Archive for Byzantine Studies) at the University of Vienna's Art History department and are being displayed for the first time.

Curated by Lioba Theis, Su Sultan Akülker and Caroline Mang from the University of Vienna the exhibition also gives way to observe the rich archive created between 1956 and 2000, hundreds of photographs and written documents, technical and photogrammetric drawings, visuals and sound recordings from the Byzantine, Seljuk and Ottoman art and architecture.

The archive consists of four sections. Restle's research in Istanbul, Anatolia and the Havran region of Syria are displayed in the first three sections of the exhibition and a short story of the archive is presented in the last section.

The archive, which carries the deep traces of an 84-year life devoted to science, tells the story of Restle's identity, how he spent a typical working day, how he divided and arranged his time and produced more than any art historian could in our day in the times without internet, what kind of a path he followed while working and which methods he used in his research.

The book in English and Turkish, published simultaneously with the exhibition also meets the readers. The book is edited by the curators of the exhibition and is translated by Yiğit Adam, it consist of articles by Lioba Theis, Birgitt Borkopp-Restle, Johannes Koder, Friedrich Hild, Klaus Belke, Tolga Uyar, Peter Waldhausl, Su Sultan Akülker, Caroline Mang, Philipp Pichler, Nina Rannharter and Cedric Huss.

In addition to narrating Marcell Restle's life devoted to research, the appendix of the book on his research in Anatolia and neighboring regions includes many photographs displayed at the exhibition.

Born on Jan. 15, 1932, in a small town called Bad Waldsee in the south of Germany, Restle was the second son of a craftsman family valuing upbringing and education. With his interest in art and architecture at an early age, after graduating from high school in Bad Wurzach where ancient languages were taught, Restle studied art history, Byzantine research and Christian history at the Tübingen and Munich Universities. He took lessons from teachers such as Kurt Erdmann, Halet Çambel and Semavi Eyice at Istanbul University for a year in 1956 through the German Academic Exchange Service. This one-year experience he gained in Istanbul opened new horizons for Restle, whose main research field was Byzantine art. Along with his main research field, Restle studied Islamic art in general and Ottoman art in particular, and he held numerous field research trips to the Eastern Mediterranean including Istanbul, Edirne, İznik and Bursa, along with the rest of Anatolia. He became an expert in identification, systematic documentation, dating and analysis of cultural assets.

He taught at the universities of Vienna and Munich, and retired from his post as professor in 1994. He donated his archive to DiFab in 2014, which includes 17,000 slides, more than 10,000 black-and-white photographs, numerous sketches and scaled architectural drawings, as well as numerous audio and video recordings during his lectures, publications and research trips. Marcell Restle passed away on Jan. 25, 2016 in the old-fashion home for seniors at Spital zum Heiligen Geist (Holy Spirit Hospital), which is a part of an old medieval complex in his hometown Bad Waldsee.