The paper-thin Orientalist: Eastern visions at the Brooklyn Museum 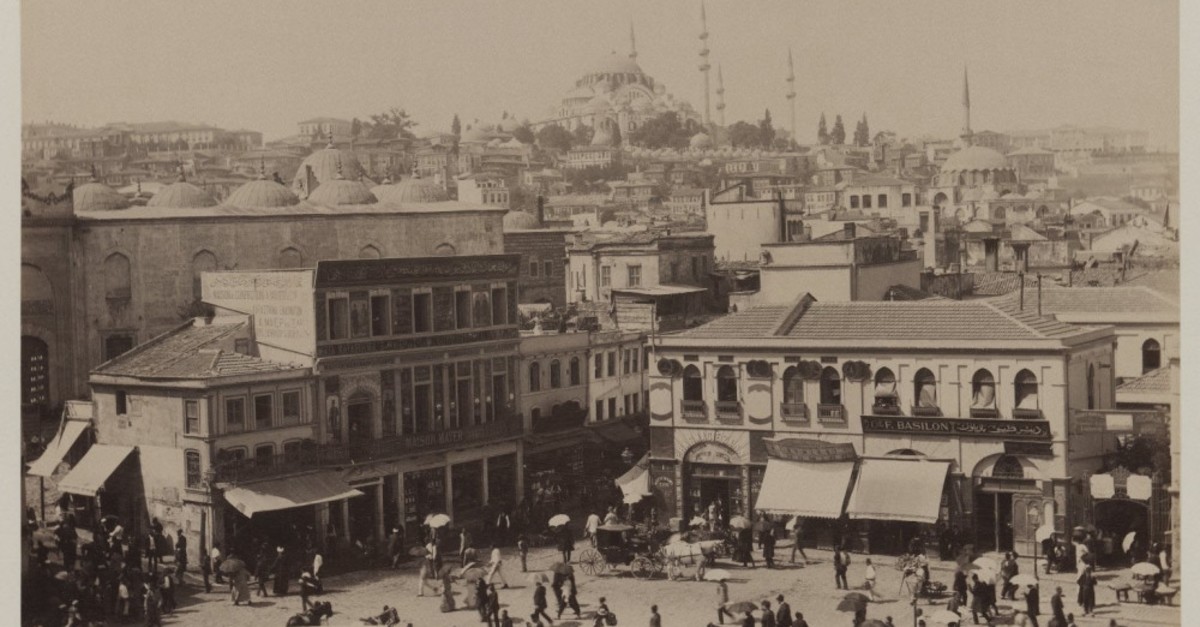 In the last century, the Islamic Arts Collection at the Brooklyn Museum has continued to expand, encompassing nearly 2,000 acquisitions, including a treasury of Ottoman art. In its rotation of permanent exhibitions, a temporary show of works on paper by European artists offers a reexamination of Islam in contemporary art history

Even when the Brooklyn Museum is not showing its Islamic Arts Collection, its sweeping curations inevitably brush up against the Near East. The representation of its landscapes, animals, children, women, men and beliefs were decisive pivots during the changing of the guards of art history, particularly as it has stubbornly shifted its Eurocentric, male gaze to include a broader scope of human expression.

There is arguably no better place from which to explore the aesthetics of social dissidence than at the Brooklyn Museum, a pioneer in the diversification of the cultural sector, as led by youth and minorities. Its current show, "Rembrandt to Picasso: Five Centuries of European Works on Paper," on until Oct. 13, features famous, deceased, white artists whose legacy demands reevaluation among contemporaries.

The classic exploration of past masters is paired with a single painting by the young, black American painter Titus Kaphar, tilted, "Shifting the Gaze" (2017). In April of 2017, Kaphar lectured an audience while standing in front of a canvas he painted to replicate "Family Group in a Landscape" (c. 1648) by Franz Hals, a 17th century Dutch portraitist. He spoke about the same issues of colonialism and appropriation that the Islamic world has faced. 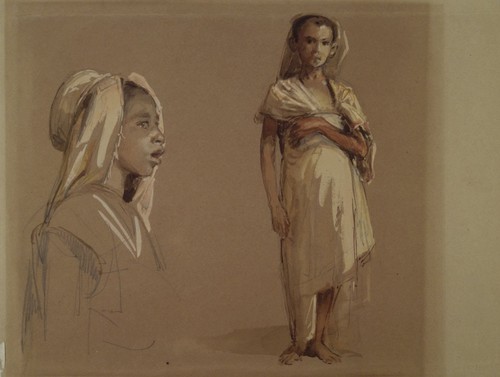 Before receiving a standing ovation, he dipped a wide brush in a white paint mixed with linseed oil and smeared it across the faces of the rich European family depicted. He left the black boy standing among them untainted. His message was clear. A color line separates his work from a stout appreciation of historical artworks on paper. Rembrandt is one of the first, pictured in a self-portrait with a plumed cap.

In informal, off-the-cuff commentary informed by a wizardry of craft and an Ivy League fine arts education, the words of Kaphar accompany "Rembrandt to Picasso" with interpretive text. His is the criticism of a studied craftsman. Four works at the show directly reference European art history's confrontations with the Islamic world. They are all by Frenchmen, and with the exception of one, pandered to the popular, and commercial orientalist allure.

Isidore-Alexandre-Augustin Pils, a military painter, was essentially peerless in his approach to representing the Islamic world in his work. He conceived an empathic Social Realism when others would Orientalize the mystical otherness of the East with a Naturalist bent that painted nameless human beings, not unlike black people among northern Europeans, as noble savages at one with the flora and fauna of their foreign and threatening environment.

Pils made "Kabyle Children" (c. 1860s) with graphite and opaque watercolor on brown wove paper. In 1861, Pils left the continent to produce a monumental painting of Napoleon III's reception of Arab chiefs in French Algeria. While the work is lost, his preparatory sketches detail the lives of local children in the Kabyle region. At the time, Napoleon III allowed Berbers to become French citizens if they renounced Islam.

Kaphar observed the beauty of the drawings by Pils. He noted the silence of one child whose mouth is left open. Below the neck the sketch fades away, stylistically akin to the work of other artists in the show sympathetic to the idea of intentionally unfinished art. His delicate lines trace a transparent torso disappearing before the sand-hued edge of the paper. The second figure stands illumined in plain robes exuding humble curiosity from their poor, bright eyes.

The distant and strange

The year Pils arrived in Algeria, his compatriot Rodolphe Bresdin made a lithograph printed in the Chine-colle technique. Much of the "Rembrandt to Picasso" exhibitions are comprised of demonstrative explanations as to the complicated, tactile processes of woodcut, engraving, etching and lithography, or ink on stone. "The Good Samaritan" (1861) was originally titled, "Abd-el-Kader Aiding a Christian". 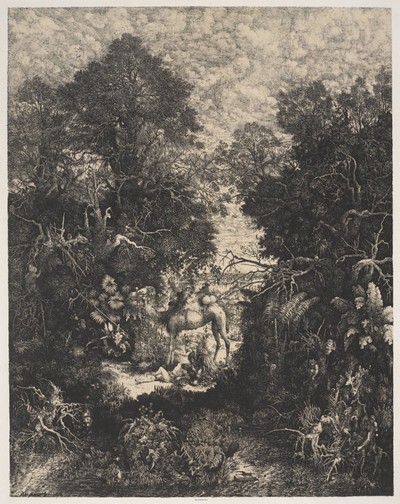 "The Good Samaritan" is a mesmerizing piece of byzantine naturalism. A lone camel patiently awaits its rider, a turbaned emir who bends low to help his Christian brother in need. Bresdin drew the piece to accord with public interest in the West, of the Middle East and its fantastical tales. One such yarn imagined an emir, an Islamic honorific which literally means prince in Arabic, who defied French colonialism, and exiled in Ottoman Syria, helped Christians.

Bresdin, unlike Pils, did not venture to Muslim lands. His illustration was inspired by a French edition of "The Swiss Family Robinson," from which he copied heavily. In like fashion, Henri Matisse followed the multigenerational tradition among Western, male artists to envision the women of the harem. The moral endurance of "Odalisque" (1924) by Henri Matisse is deeply interrogated by Kaphar in the context of the Brooklyn Museum show.

Kaphar proposed a fictional experiment in historical accountability. He thought up a kind of performance piece, in which Matisse, Picasso and Gaugin are resurrected and invited to see their works hanging in the light of 2019, but that they must sit and listen to people alive today reconsider the relevance of their perspectives in a world in which predominant privileges and power balances are being checked.

The model Henriette Darricarrere posed as an "odalisque," or an orientalist term literally from the Turkish root word for "room," connoting a woman confined to a private, domestic space. Matisse's lithograph portrait of her on laid paper was part of the artist's first large-scale monographic exhibition at the Brooklyn Museum, in 1935. In its wake, controversy still stirs.

It is not coincidental, or purely a measure of elegance, that the see-through lace of the odalisque's dress matches the wallpaper design. She is framed, or more bluntly, dehumanized, as another piece of decor. That was an element of visual theory that the monumental painter Eugene Delacroix mastered. His lithograph on wove paper, "Lion of the Atlas Mountains" (1829) is steeped in the Romantic tradition of the East as a wilderness of animal passions.

To familiarize 'the other'

In 1919, the Irish poet W.B. Yeats versified, "the center cannot hold" in his major work, "The Second Coming." In modernist style, he was talking about postwar Europe, whose prominence as the center of the world is still coming undone. While such shows as "Rembrandt to Picasso" are steadily curated with reference to the famous idols of Western art history, the subtext of its imagination leads explorative eyes to seek communion with its creative sources.

The Islamic Arts Collection at the Brooklyn Museum is an apt resource to behold the work of Muslim artists who ingeniously developed human expression. They patterned textiles in Uşak, fired clay in İznik, miniaturized Seljuk portraits, calligraphed sacred texts and marbled paper with ink in Istanbul. Also part of the collection, the 19th century photography of Pascal Sebah and Policarpe Joaillier in Istanbul represent a turn when subject and object, East and West, merged.