Striking artwork questions what we leave behind for cities 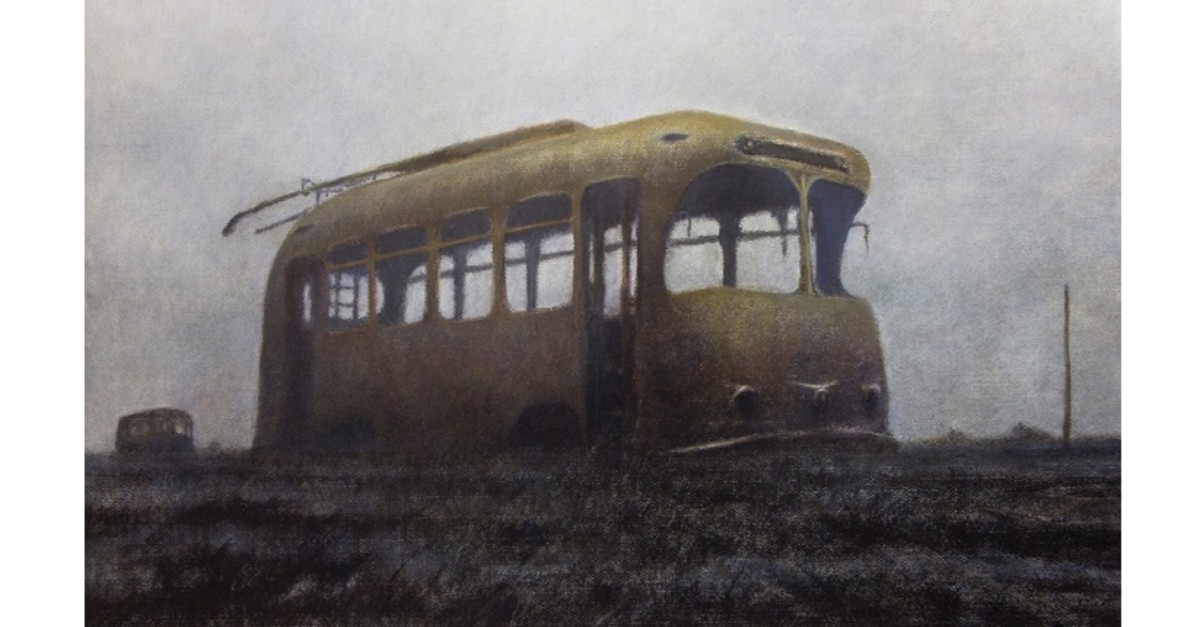 Armenian artist Sergey Narazyan's impressive body of works, which reflect the destruction left behind in rural settlements as a result of the march toward cities, are on display at Galeri 77 in Istanbul

Galeri 77 is hosting Sergey Narazyan's first solo exhibit in Istanbul "Vivid Dreams and Countryside Tragedies." The exhibition focuses on the concept of "The Seventh Continent," which is the theme of the 16th Istanbul Biennial between Sept. 5 and Oct. 12.

When one contemplates that the universe, the world, humankind and all entities have a mission of balancing life, which is filled with contrasts, one can perceive that a sustainable world is very much a possibility. Humans have long left being a part of nature and have drifted apart from it, damaging the world even further. There was a time when humankind dreamed of a better future and a better life; the devastation caused by development was overlooked and that dream of a better life started to threaten our very homes.

Numerous scientists have already reached a consensus that our world has entered a new age of mass extinction. We are now at a point where the diminishing of the pristine corners of the earth and the growth of settlement areas increasing at an alarming rate, coupled with uncontrolled overpopulation, are causing the distinction between the cities and nature to become even more blurred. On top of that, we are still unaware of the scale of the damage caused to Earth. For this very reason, The Seventh Continent's point of origin becomes the colossal mass of trash dumped in the center of the Pacific Ocean. The Seventh Continent is nothing but a huge collection of plastics, with an area about 3.4 million kilometers in width and weighing about 7 million tons.

The results of this man-made devastation are not just on an ecological scale, but also can easily be seen in our own lives. Economic factors, wars, climate factors and famine cause migration. People leave their homes, cultures and the lands they were born on behind in search of better lives. From this perspective, Sergey Narazyan paints the void that people leave behind. Counseling us to look back and see what we have lost, Narazyan offers impressive compositions on the dominance and weakness that humankind has in the face of nature. Narazyan paints with pastel on paper scenes where there remain only empty houses in the countryside left by people long gone and flooded into the cities, where the young population has practically disappeared, and where deserted streets and eternal solitude reign. He depicts all of these topics and presents them under the title "Countryside Tragedies."

In recent years, Narazyan has based most of his works on contrast. Generally transforming contrasting themes such as life and death, youth and old age, power and weakness into ideas using different figures, the artist in one of his recent pieces renders a view from above a legion of soldiers in a foggy atmosphere between high mountains, where the normally looming troops can be seen as tiny as ants, depicting their weakness in the face of inner fear and thus, the rapport between power and weakness. From time to time, using static human figures he reiterates their postures that have become heavier under the weight of years with a view infused with the consciousness of experience. Not simply confining the distortion of old age and collected memories to human beings, the artist, when painting overripe fruits - or as it can be seen in his painting "The Elders" depicting two old wooden cottages in an unkempt landscape full of weeds - encourages the viewer to contemplate on the stages of existence. In "The Red Lipstick," Narazyan pictures a woman who is stationed just on the junction point of these time sequences and wears red lipstick and a floral blouse despite her physical appearance, which is withered with old age. Thus, he invites us to rethink the life cycle.

Sergey Narazyan was born in Yerevan, Armenia in 1970. He received his first fine arts-related training at a drawing workshop affiliated with the Union of Architects in Armenia. In the following years, he attended painting, drawing and composition courses at the studio of renowned artist Ruben Gabriyelyan. In 1989, he entered the Yerevan Art Institute Figurative Arts Department's Graphic Arts program. Opening his first solo exhibition at the exhibit hall of the Union of Architects in Armenia in 1994, the artist drew the attention of art authorities with his pastel works. In 1995, he completed his master's thesis at the Yerevan Art Institute with illustrations he prepared for Russian writer Boris Pasternak's novel "Doctor Zhivago." Thanks to these illustrations, he was accepted to the Artists' Union of Armenia when he was just 24.

Between 1995 and 1997, he drew again the images of Swift's "Gulliver's Travels." Combining entertaining and dramatic similes with daily life, Narazyan did not describe the big meeting on the body of Gulliver or the Lilliput army's marching between Gulliver's legs in a dreamy land but in a recognizable reality. Then Narazyan brought a number of his paintings — on which he reflected ironic, sarcastic and tricky observations about countryside life together under the title of "Countryside Tragedies."

In 2001, he opened his third solo exhibition in Paris with the help of famous fashion doyen Pierre Cardin, a member of the French Academy of Fine Arts and a United Nations Goodwill Ambassador. The exhibit consists of 90 works including illustrations and paintings along with the artist's more basic works.