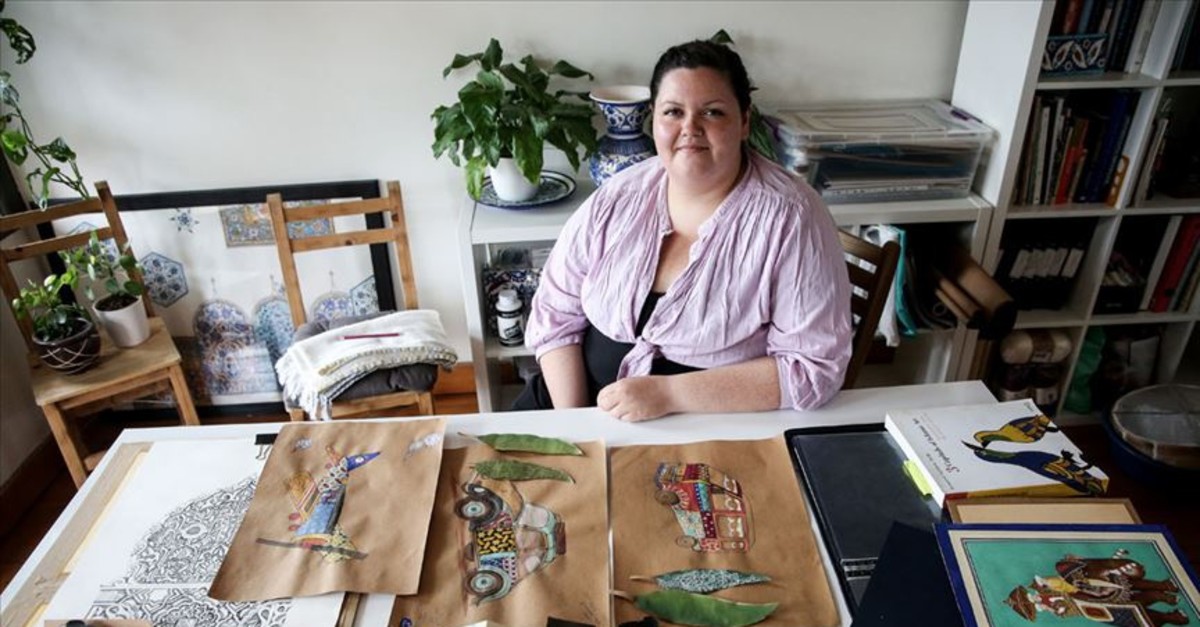 At her workshop in Balat, Rae initiated her miniature project depicting the stories of Muslim female travelers, who she defines as ,being lost in the pages of history.,
by Anadolu Agency Sep 10, 2019 12:17 am

Canadian Muslim artist and writer Laurelie Rae brings the memories of Muslim female travelers to the present with miniatures. Rae, who comes from a family of artists, became a Muslim at the age of 17, while conducting academic research on many branches of Islamic art, as well as creating many works of art.

After completing her master's degree in the U.K.'s Prince's Foundation School of Traditional Arts, Rae came to and has been living in Istanbul for the past six years and continues her academic and practical studies of the traditional and modern art branches at the Visual Arts and Visual Communication Design Department of Sabancı University.

At her workshop in Balat, where she teaches ceramics, she initiated her miniature project depicting the stories of Muslim female travelers, who she defines as "being lost on the pages of history."

Symbolizing and coding Muslim female travelers with different names she encountered during her academic studies, Rae aims to publish a book with her miniatures, which are mostly embroidered in gold.

After deciding to convert to Islam, Rae became interested in Islamic art in order to better understand the cultural accumulation of Islam and said that her family was influential in this process.

"My mother is a ceramic artist. We worked together when I was a child. My art life started when I was 4 years old. My mother, me and my sister have always been interested in art. Art brings you to a very different place in life. You get your inspiration from life. Plants, flowers, leaves, trees are my inspiration, but inspiration is different for everyone in art. After working on ceramic for many years, I started to learn Persian miniature," Rae said.

"I bring them to the present day by creating new characters out of them. I reveal what they did and their secrets in books. I symbolize important sections of their lives and turn them into miniatures. At first, I come across different life stories in the autobiographies of and books on Muslim travelers such as Nour Begum and Forough Farrokhzad. I have never told anyone about the information I gathered from my research and I'm keeping them as secrets. Iranian and Indian women have many stories about their journeys waiting to be discovered. I will try to show in miniatures that Muslim women tried to discover the world in every period," said Rae.

Rae emphasized that she tried to make sure that the colors and materials used in Islamic art are natural.

"Lapis Lazuli, for example, is a stone used especially in Christian traditions and today, it is much more expensive than previous periods. It is mostly used on the clothing drawings of Jesus and Saint Mary. Whereas turquoise tones prevail Islamic art. This stone is believed to have a sacred value and all the colors used were made of natural products. For example, in order to make the ink used calligraphy, smut from burning candles was used. Nothing was wasted and the artists used all the natural products obtained in some of the works of art. Now, the colors used turn into other colors after 50 years and do not look nice. But the colors used in miniatures made 600 years ago still retain the same vividness," Rae added.

Rae said that she would collect miniatures of Muslim female travelers in a book and called on young artists to work more in the field of traditional Islamic art.