Witnessing annual mass at Akdamar's Church of the Holy Cross 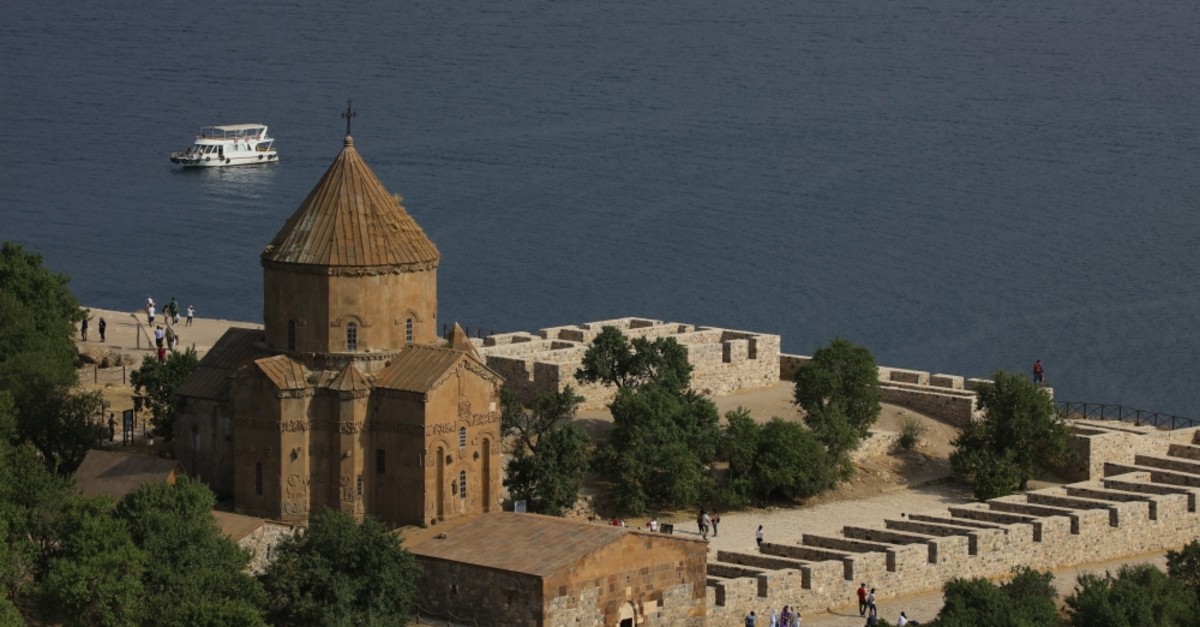 The 10th century Armenian Church of the Holy Cross is located on Akdamar Island in Van.
by Nagihan Haliloğlu Sep 12, 2019 12:22 am

The faithful and the curious gathered together again at the Church of the Holy Cross on Akdamar on the second Sunday of September. The visitors were treated to ethereal Gregorian singing and prayers for lasting peace in the region

Lake Van stretches across several towns on the eastern Anatolian high plateau, a stone's throw away from Tabriz, Nakhichevan and Yerevan. In high summer, with its yellow bare hills and bright blue sea, one can easily mistake it for the Aegean - only, the coast is not taken up by hotels and holiday resorts blocking the view. In the lake - it was officially recognized as an inland sea in 2012 - are four islands, the most famous of them being Akdamar, with its 10th century Armenian Church of the Holy Cross.

The church saw its share of the troubles that the wider region faced during and after World War I. In the 1950s the badly vandalized church was on the brink of total destruction when Turkish novelist Yaşar Kemal galvanized the powers that be to stop that from happening. In 2005, extensive renovation work started and in 2007 the church was opened as a museum, and finally in 2010 the first mass was held almost after a century. Since then, the church has been holding an annual mass drawing great attendance from near and far.

My friend and I were two of the very first civilians who were present at the Gevaş ferry stop; all the rest were wearing either crew or press badges. We had to queue for the opening of the gate like at a rock festival, as more and more unsuspecting members of the public who were looking for a ferry ride and a picnic on the island started to pile up behind us. There was canoe practice on the lake and everything looked very idyllic. When we arrived on the island there were very few people and so we were able to circle around the church to admire the famous bas-reliefs.

There is something to be said about the combination of clear blue skies and reddish yellow stone buildings soaring against them. On top of that, the Holy Cross Church boasts of some of the most intricate and elaborate bas-relief scenes on any church. The bigger, almost life-size reliefs closest to eye level depict scenes from the Bible. The most prominent one easily seen from the southern entrance is the story of David and Goliath; David unmistakable with his sling danglingfrom his hand. 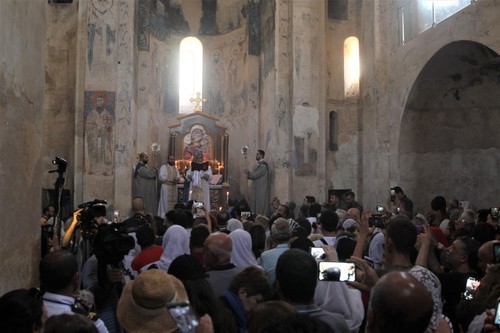 People gathered at the mass at the Holy Cross Church.

There is also a figure to their left, in a very fancy robe and a turban, pointing to them with his hand - he must be a king, but I also feel like it could be one of the narrators of the Bible, drawing our attention to the scene and saying "This is how it happened, take heed!" Right above him there is a bust of Jesus, pointing, it seems, to the David and Goliath scene as well, this time with just one finger. The whole set up is very metafictional. Above these recognizable scenes, there are reliefs of animals that one may or may not recognize. Winged creatures and dodo-like birds, panthers tearing each other apart. These animals remind us of the beautiful environment we're in, a walled green garden on a mostly barren island. Further up still, just before the dome, a vine relief encircles the circumference of the building, with human and animal figures hidden between the lush grapes and leaves, invoking a very early stage of the Eden we have been expelled from.

My friend and I, along with some other early visitors, try to guess where the bulk of the program will be happening. We mill about the apse entrance and make small conversation with pilgrims who have come from Fatih and Yeşilköy while members of the choir wearing black or grey and blue robes come in and go out. We are told that the public will enter from the north, and when we go there, we find it closed. We circle the building again, and end up at the south face again where they have laid out a tent and some chairs. But we seek refuge under the awning and this time admire the Jonah and the whale relief, Jonah looking like he is being fed to the fish by his fellow boat travelers. Metaphors to contemplate everywhere, considering we are on an island, and indeed the history of the region.

Then, all of a sudden, the speakers placed right under Goliath come to life and the first notes of human voice in all its Gregorian grandeur are sounded. My friend and I look at one another, our jaws dropping at this unearthly sound. We are all goosebumps. This, then, is the best place to observe the proceedings. We seek refuge under a tree and let the hymns wash over us as a sizeable crowd gathers. We try to discern who is there for prayer and who, like us, are visitors, although by this point, we are already engaged in a spiritual experience of our own - the hymns will just not let you remain in the secular realm. I look out towards the lake and see that some weekenders have set up their towels on the pebbly beach and are enjoying a swim.

The choir gathers in the shell of another building and then it starts in earnest. Chanting, they walk towards the apse, some 10 of them, a couple of them holding up metal staffs with bells that they shake to punctuate parts of the hymn. When they are in, we go to the north side again to get in, and see a melee of people, more tourists than faithful, scrambling to get a view. Some pilgrims are frustrated, and we are frustrated for them, sharing our concern with civilians and "staff" present, suggesting there should be a segregation between tourists and worshipers, as in mosques. One Istanbulite Armenian auntie we speak to seems pretty unfazed, saying such things are inevitable. "No matter, they don't have go near the choir to pray. They can pray anywhere, I go into mosques sometimes, and the public should be able to get in here too." I think of all the prayers that must have been prayed here centuries ago, but especially just before the war when tensions must already have risen between the communities.

This theme, then, is repeated when the time comes for the sermon. It starts off in Armenian, like the khutba starting in Arabic, and then the priest switches to Turkish, in an accent and cadence that I am indeed very familiar with from Friday khutbas. He praises the beauty of the building, the people who helped preserve it, but then reminds us that God - and he uses the word Allah, just like Arab Christians do - does not need these spaces, that it is for us mortals to have a safe space to contemplate creation. He reminds us that the whole world is God's temple, and it is like an exegesis of the verse in the Quran that tells us that the whole world has been created as a masjid. After prayers for peace and unity, reading my mind, he invites us to think of all the other prayers and hopes that must have accumulated in this sacred place - and that we, praying here together, might be the answer of some of those prayers.

The priests all come out and there are further prayers out in the open where more people seem to be able to engage, particularly a contingent of middle-aged ladies - Armenians from Armenia - who seem to know all the prayers by heart. After the religious ceremony, the secular authorities give short speeches; the Governor of Van and the former Culture Minister Ertuğrul Günay, who was instrumental in opening the church for visits and the establishment of a yearly mass. He thanks God for bestowing this honor of opening a house of worship. Then it's time for photographs with the dignitaries. As we go down the hill to take the boat back, we see even more weekenders coming in with their picnic baskets and try to find a boat to get back. We somehow stumble on the boat of Armenian pilgrims from Armenia who, having had their fill of ecclesiastical music, start singing folk songs that sound vaguely familiar. We remind ourselves that the whole world is indeed a masjid, and that there are numerous ways to express gratitude and appreciate the works of God.