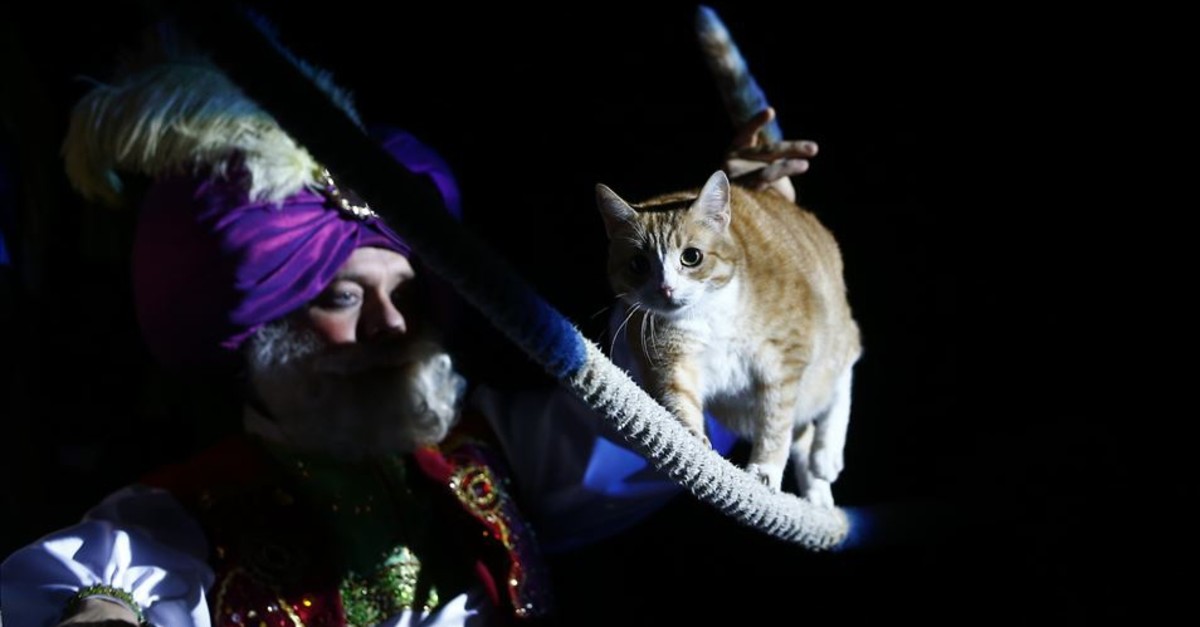 Launched about 30 years ago, the Moscow Cat Theater is the only place in the world that engages cats as actors in its performances. In the theater, the cats, which are considered practically untrainable, ride bikes, walk on a wire, perform acrobatics and aerial acts.

"A cat will never do anything under constraint, but it is possible to make an arrangement with cats, using their natural abilities and needs. And, if there is love and mutual understanding... In general, love and respect give more than banal training. It is impossible to punish a cat backstage, and then, make her perform tricks onstage. With cats it doesn't work," Dmitry Kuklachev, the theater's first deputy art director, said in an interview with Anadolu Agency (AA).

The idea of creating a cat theater appeared many years ago, when the current theater's Art Director Yury Kuklachev was beginning his carrier as a circus clown and searched for his own signature move, a star turn, his son Dmitry Kuklachev said. "One day he found a kitten, it was very communicative, cheerful. And during a curtain call, it so happened that he came out with the kitten on his shoulder. And he saw that the spectators warmly reacted to this. So he started developing the tricks with cats and after 20 years in the circus established his own theater," he said.

About 200 tailed, furry performers live in the theater, most of them are acting in 12 performances, that the theater offers to their spectators, while about 30 cats are "on the pension" or in training. "We have 12 different performances in our theater. I'm saying it proudly, because in a contrast to dramatic theaters, in our case, we need four-five years to present a new show," the artist says. It takes about a year to prepare a new performer, from its first appearance in the theater to the entrance upon the stage. The cats have to go through two castings, first, talent one and then, tests, confirming their good health as they have to live in the theater's commune.

"A cat must possess different talents, must be playful, curious, loose. How do we know it does? In a new place, she should feel like a master. For example, brought here, it should explore everything, sniff. This is a sign of a future artist. Not all animals have these traits. After passing the casting for talent, cats undergo a physical examination. They have blood tests for eight different diseases. About a month the pet lives in quarantine, separately from other cats. If all tests are clean, then after two-three weeks, we begin to adapt it to the rest of the company. If not, then we put it in good hands," Kuklachev said.

In the beginning, the theater found new artists everywhere, including on the streets and in cats animal shelters. Now, as the theater's family grow, most of the actors are from the kin. "About four months ago we had 17 kittens, eight of them remain in the theater. Each of them, and each of our cats performs its own trick. My task is to notice the skills, to develop them, so that the cat would love to perform the same trick," Kuklachev said.

The theater has its leading performers and stars. One of them is the tomcat Boris, famous in Russia for advertising cat food. When cats grow old they remain in the theater, taking advantage of good care and enjoying their old age. "The salary we offer our cats is their good mood, good attitude, delicious food and comfortable old age," Dmitry Kuklachev said.